Every action takes a period of time (in months), and the game ends after 25 years, but is still a score chase.

Is there an endgame or is this more like a puzzle game where you just try to get the highest score you can before the map is exhausted?

I was going to quip that it’s too short for an endgame, but it occurs to me that’s not true at all. The higher level techs can sort of serve as an endgame, if you decide to go that route. But, yeah, overall it’s a score chase without any framework for the score you earn. :(

I didn’t recognize you there, for an instant!

Just saw your post. Damn, that’s incredible.
I’m so attention challenged, I hadn’t bothered to look at how money may impact the final score. I assumed it was something to pursue, but it really isn’t! Damn I love this game.

I’ve also been struggling at the 3-star level on challenging. I just had a great culture-focused run: 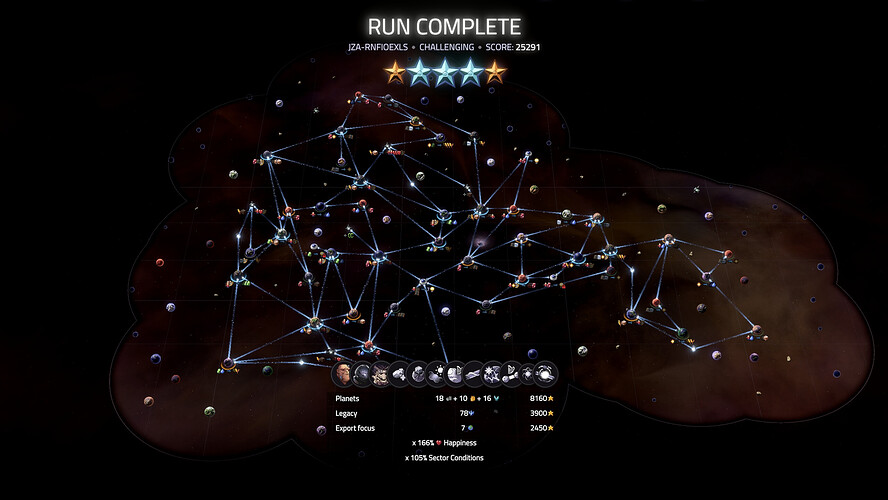 Barely broke 25k (thanks to a little nonsense-lab I set up to provide 1 employment and get 4 exports on another planet). The quirk here was “export focus”, or 350 points for each planet with four exports. I didn’t plan it out but that worked great with the culture project because it converts a person to a culture which can be exported anywhere.

I also love artifact trading as a perk. My other perk was the increased asteroid value, as I usually like the $ for planet finding perk to keep the money going in the early game, but for whatever reason this time I was really rolling in dough pretty early on.

Sometimes the planet layout just really comes together and it feels so good.

Okay, if any leaderboard is planned, I ask for it to be cancelled immediately!

I’m also a “Challenging” zealot. That difficulty setting is perfectly right for me.

Dev’s said on the forums that Steam will be getting achievements soon.

The Eggplant game design podcast had an interesting conversation with the developer of Slipways. Eggplant: The Secret Lives of Games: 72: Expanding Your Universe with Jakub...

Jakub Wasilewski of Beetlewing joins us to talk about his new grand-yet-bite-sized space strategy game, Slipways. We discuss game feel as inspiration, breaking your game for fun and profit, and limiting your universe to expand your audience....

One interesting takeaway that intersects with some of @tomchick’s frustrations is that the designer says he wishes he hadn’t put such an emphasis on score, and that this encourages players to judge themselves by score more than simple success. For whatever reason, that’s not the ideal way to approach the game from his perspective. Probably explains why scores aren’t saved/compared/persisted like we might expect.

Dude is insane. Which might explain why the game is so brilliant, too.

Oooh, thanks for the link. I’m eager to listen to this!

One interesting takeaway that intersects with some of @tomchick’s frustrations is that the designer says he wishes he hadn’t put such an emphasis on score, and that this encourages players to judge themselves by score more than simple success. For whatever reason, that’s not the ideal way to approach the game from his perspective. Probably explains why scores aren’t saved/compared/persisted like we might expect.

I am pretty sure he would have gone with a three stars system. Those are so rewarding.

Just got an update that saves your run history. The next update will include functionality to browse said history and scores. But all games you play now will already be stored for that update.

I didn’t get that update. babyrages

That seems correct to me.

But each icon doesn’t necessarily correspond to exactly one resource being needed or available, it seems. There’s some hidden math?

Each icon is always one resource. Thing is, connecting planets via trade will often “level up” the planet, increasing its production or demanding a new product. That might explain what you’re seeing.

Also, planets can import any number of a resource that they demand, even if the demand is already satisfied.

That doesn’t seem to jive with my experience, nor techs that do things like increase production by x%, but I’ll pay closer attention and see if you’re right!