I picked this up again, inspired by Tom’s GOTY list. Act 2 of the campaign has been released since I last played, so I’m working my way through that. On the scenario where you have to cross the rifts and rescue the expeditions (I guess it’s kind of a spoiler, not that this is a particularly plot-forward game) thing just came together perfectly, somehow, and I completely aced it. So I have to brag about it here: 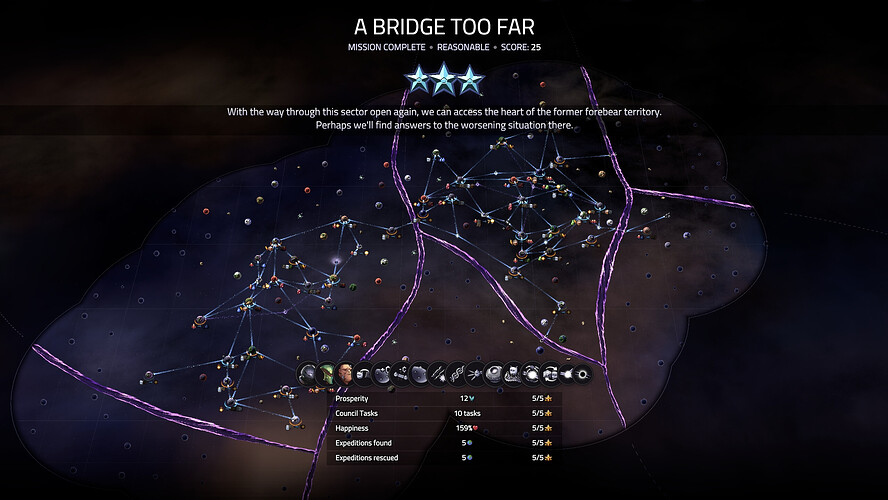 I’m just gonna brag again, because I had another one where things just went right (“double platinum”!). I had the Dendr perk where Prosperous planets take one less route, and the Silithid one where forgeworlds can produce a robot in addition to circuits. Combined with the techs for projects for a circuit on mineral producing planets, and a trade goods on robot planets (and vice versa) this meant that my high-tech game was super strong. (Funny to see a forgeworld planet putting out three circuits, a robot, and a trade good.) It helped that I got my labs down fairly early.

Looking at the scoring, it seems I put a bit too much effort into completing council tasks vs just getting more prosperous planets. OTOH maybe I should have spread out the tasks more so I could get more of the species capitals. On the third hand, I got a couple culture producing techs and on the last turn of the game I just went around throwing culture every which way, which resulted in >200% happiness, so maybe I didn’t miss out on much by only having one capital. 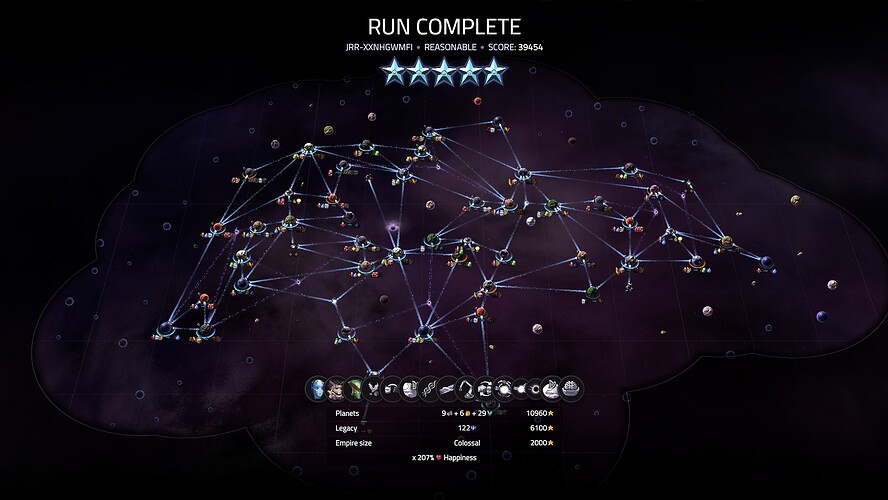 What is the threshhold to get fired? I never had a successfull run, because I have too many red flags and can’t satisfy them planets

Oh, I don’t remember. Fairly early in I settled in to my strategy of only very rarely settling planet groups that end up with a missing need. Like, maybe once once per game, and even then I try to have a plan for an upcoming tech to resolve it or at least a bunch of unexplored signals to roll the dice on.

In case anyone doesn’t know, you can right-click on planets to put them in “planner” mode, where it just notes what you’d like to do and even draws dotted lines between planets for you.

The threshold depends on the difficulty level. I think you can view it by mousing over the current discontent score?
Also, thanks Tom! I had somehow missed this game until It made your top 10 list

right-click on planets to put them in “planner” mode

I think I settle too many planets hoping for corresponding planets… will try again.

The other important hotkey is Alt to show possible connections. This applies while placing a structure too.

Awesome run. ooomalley! I wish I could come close to that.

That’s your problem! Hope is your enemy. Hope kills. Don’t give in to hope, kids.

The other important hotkey is Alt

Awesome run. ooomalley! I wish I could come close to that.

Disclaimer that I’m playing on normal difficulty. I went up to hard when I was playing it last year, but it’s just not as fun to struggle, I find.

And really I think there’s a good deal of luck in the planet layout.

finally I completed my first run ever with 3/5 Stars. I had a lot of money and some technologies to transport goods around corners… campaign unlocked. Is the campaign worthwhile?

Is the campaign worthwhile?

Well I hope to play the campaign one day as it needs to be unlocked with a 3 star run first, at least I am getting better. 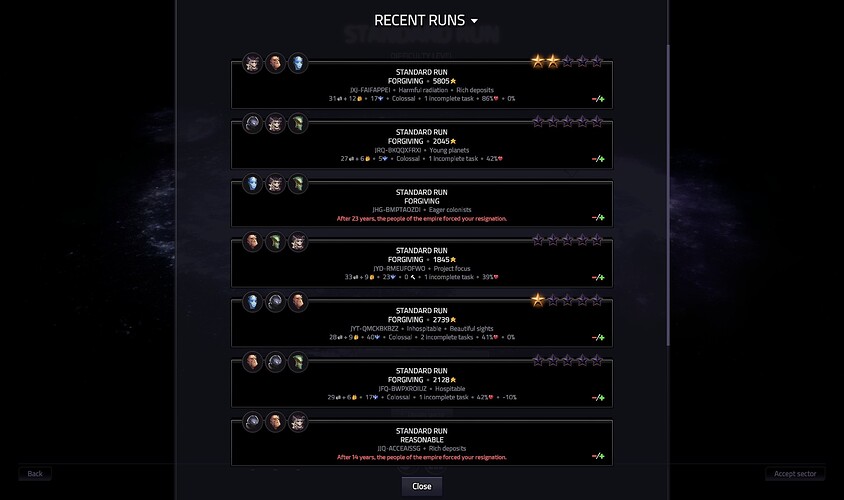 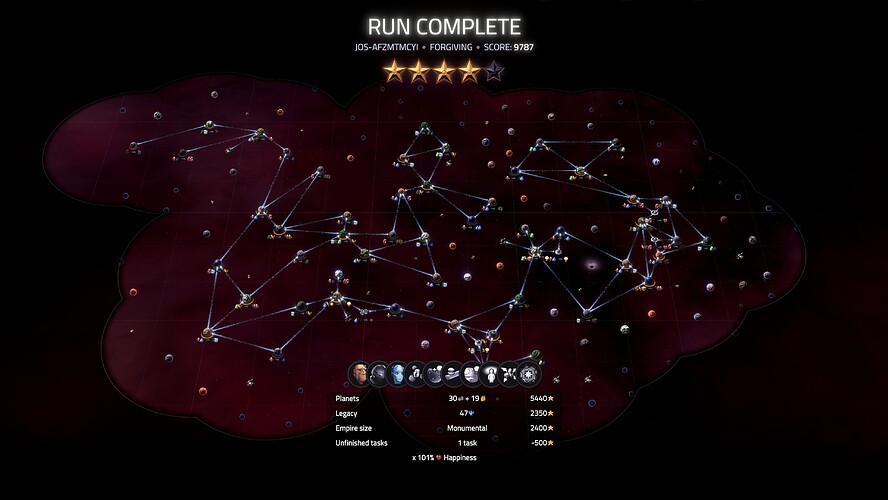 The campaign is good but not spectacular, imo. Definitely worth doing as it mixes some stuff up in interesting ways. I find the ones where you have to develop planets connected to a central point (to the exclusion of everything else) to be a bit frustrating and luck-based. But some of the other ones are pretty satisfying.

It’s also worth knowing the campaign is only two thirds done as yet.

The best bit is that the rules for campaign levels get unlocked in other play modes too so you add variety to that as well.

It started to get addicting! My next run only was a 1 star rating, I got impatient at the end and ended only with 66% happiness

Y’all reminded me about this enough that I went back and finally completed mission 1 of the campaign!

Pick this up last night. Went through the learn to play area and then dove in. Took longer than it should have to understand the moving of the “goods” but now I got the basics. I think I’m going to like this. 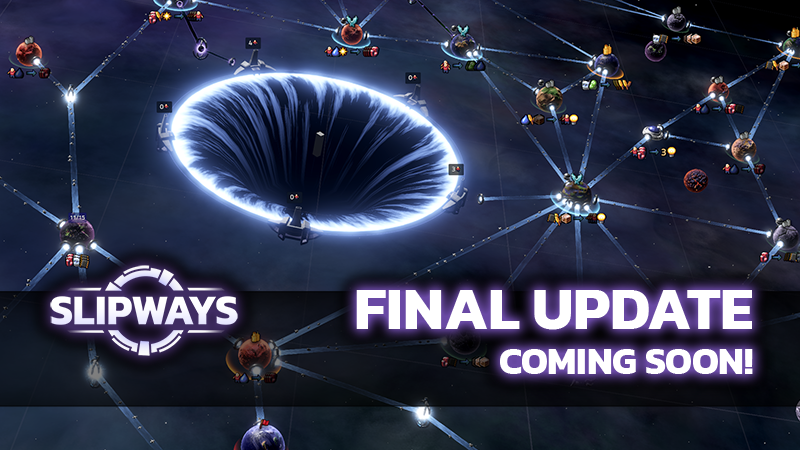 Includes the final act of the campaign, support for mods, and many smaller additions, free for all new and existing players, coming by the end of June.