They released this at the worst possible time to squeeze it into my budget. Glad to see them iterating on the Dropmix formula - liked what they were doing but it wasn’t quite there. Hopefully this one will stick.

Glad to see them iterating on the Dropmix formula

Me too, and doubly glad they did so in a way that doesn’t rely on a physical tchotchke (sp?) that will inevitably get lost, collect dust, or be forgotten after a new console generation. I definitely want to try this out. 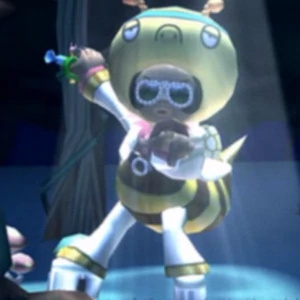 Yep, this definitely feels like an evolution of Dropmix. I’ve only done a little slice of the campaign but I like how the challenge is in keeping your mix interesting and dropping tracks on the beat. And I REALLY like how you can “look ahead” to see places where you might want to drop in, say, a different vocal.

In Freestyle mode I was happy with ability to mute or solo each individual track. There appears to be some technique to learn.

One thing I do miss from Dropmix are the 5 slots. In this you only have 4 and one of the things I really liked doing was having 2 drum tracks going and cross fading between them.

But so far so good.

I appreciate the game comments (sincerely), but that website can fuck right the fuck off (also sincerely).

Here’s a screenshot of the way it looks, with the tiny porthole of actual CONTENT bordered in red. 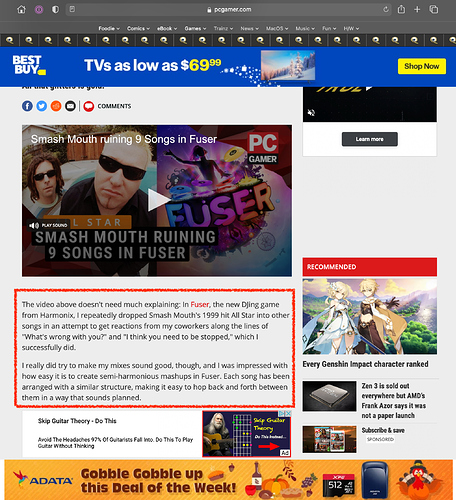 Fuser is a rhythm game developed by Harmonix and published by NCSoft. It was released on November 10, 2020 for Microsoft Windows, Nintendo Switch, PlayStation 4, and Xbox One. In Fuser, the player takes the role of a DJ at a large concert. They have a virtual DJ table with four record players, and a list of records (their crate) along the top of the screen. Each record has four tracks keyed by color and related to a type of musical instruments like drums, guitar or vocals. At any time, the playe...

I’m kind of wishing I’d heard of this game before release so that I could have gotten the pre-order songs too.

I love Dropmix but I never played it as a game. I only used it in Freestyle mode.

I haven’t heard of Dropmix, but this is how I played Amplitude with my friends back on the PS2. We just got into the creative mode, and we were endlessly fascinated at how you could create new songs with the skeleton of an existing song’s rhythms and instruments. We discovered that as long as you stay away from the vocal track, you could make each of the songs in the game sound completely different. We even had this thing going where we would each work on one “track” each as we passed the controller around. And you kind of build on each other’s work from the previous tracks, and you get a really cool sounding unique song as a result.

Shaq DJ'd on Twitch Through the Fuser Game Channel

I spoke too soon about not being able to drop multiple tracks of the same instrument type. Later in the first part of the campaign it’s explained how to do it. Cool.

I looked it up on the Series X yesterday, and I was a little shocked to see the price. $60 for the standard game, and $100 for the VIP edition with all the DLC songs added in. Expensive!

There are a decent number of songs in the game already at least.

True. From that wiki page I linked to above, I counted about 108 songs in the main game (I might have miscounted slightly), and 25 extra songs in the VIP/DLC. If you buy the songs individually, they’re $2 each, so $40 extra for the VIP saves you $10 over buying the songs individually I guess. Plus 108 songs is a lot. I love that they have Rick Astley’s Never Gonna Give You Up.

I assume the three pre-order songs will be available soon for $5 too.

After spending some more time with the Campaign, I have some additional thoughts on this. The campaign is a great way to be slowly introduced to the many, many systems in the game and how they relate to creating an interesting set. I really do appreciate this, because I’m not a DJ. Fuser is good at making most things you throw at it sound at least somewhat decent (although you can absolutely create some stinky mixes), but there’s a lot more to building a set that flows from one idea to the next.

That’s where intermediate techniques like soloing, muting, crossfading come into player. And as you continue through the campaign you’re introduced to more advanced techniques like key and tempo changes, cueing, playable instruments (YMMV on this one), and effects. There’s a lot to learn and I’m enjoying the campaign primarily as a tool to get a handle on this stuff.

But there’s a dark side here, and that’s the Star Rating system. Each set in the campaign rates you on a scale of 1 to 5 stars, based on how many points you earn before your set is over. The problem in my mind is that points are earned mostly by dropping tracks on the 1 beat, or using the perfect “pick-up” for a track (not always on the one). You can also get some points by fulfilling requests of the audience. But because the campaign also serves as a tutorial, there are limited places where you can actually score points. When it’s teaching you a concept, the “timer” on the set basically freezes allowing you to spend as much time learning what you need before things continue. During that time, you can’t earn any extra points (which makes sense as they clearly don’t want you to farm points). So what happens during the windows when you CAN score points? You’re dropping new tracks in all the time regardless of how they sound or if it makes any sense conceptually. If you want to score 5 stars you pretty much need to drop something every four beats. And that kind of ruins the flow. Sometimes you might want to let the mix breathe for a bit while you cue up something awesome that needs to come in at a specific time. You can’t do that if you’re shooting for 5 stars. So I feel the star system as it’s currently implemented goes against what the game is trying to teach you in terms of being a good DJ.

Now it’s not really a deal breaker. It’s not too hard to get 3 or 4 stars if you nail all your drop perfectly. That’s enough to net you plenty of in-game currency to unlock additional tracks and things. And creative mode is just a joy. So much more interesting than Dropmix.

I haven’t touched battle mode or spent any time perfecting a set yet. There’s a lot of creative fun to be had in this game. I just wish the campaign was more in line with the clear spirit of the game.

I just wish the campaign was more in line with the clear spirit of the game.

How far have you gotten in the campaign? I’ve only made it into the second (out of six, I think?) venue. I’m hoping later venues offer a more open and creative approach rather than the rote mechanical approach of trying to get maximum stars. Do you know if that might be the case?

Conversely, I don’t really see the point of the freestyle with its no-fail “do whatever the heck you want for as long as you want” approach. I need some kind of structure so that it feels more like a game and not just a music-toy, but not as much structure as the early levels are imposing.

When/if you upload any mixes, link them here so we can listen! If you even can link them. Or maybe we have to search using our friends lists?

I finished 3 Stages and I’m on the 4th right now. It doesn’t feel any more creative or open (although the effects are really pretty cool).

I would love a mode where you have to read the crowd and react a bit more to their needs, but allow you some additional time to get to where you want to be with your mix. Right now, the time pressure to drop something, anything, on the next beat.

Are people playing this on console or PC? From the QuickLook it seemed like you’d want a mouse to have good control of the interface, but ideally I’d be playing the music through my home theatre setup.

I’m playing on XSX. The touch targets are large enough it hasn’t been a problem to use the controller.

More thoughts. I’ve completed the campaign. It does get a bit more difficult. I was averaging 3 stars. Failed a couple of times. The difficulty come in the types of things you are asked to do and the amount of time you have to do them. For example, you might need to cue up a couple of different tracks, play and instrument for a set amount of time, drop the cued tracks and fade a different track out. So 4 tasks over a set amount of time, and one of the tasks (playing the instrument) requires you to not be doing anything else. It can get pretty tough when you’re juggling all that, but I can see that with practice you could finish the tasks and then have time to drop some perfectly timed switches to boost your score and hopefully get to 5 stars. For me, the trouble is I don’t really want to do that. As mentioned before, dropping something new every 4 beats doesn’t really sound all that good. I might swing through the campaign again to try to boost my score, but for now I think I’m done with that part of the game.

I messed around a bit with Battle Mode. The instructions are a bit cryptic and an in-game tutorial for this mode really should have been included. It seems like it all boils down to dropping your tracks perfectly on the 1st beat, or the 1st beat of every 4th bar (a musical phrase), or on the pick-up. That and following what what crowd wants to hear.

So both you and your opponent are dropping your tracks and (I think) at some point your tracks are compared to your opponents and the “strong” track wins. In my first and only match I completely smoked my opponent but I sure as hell couldn’t tell you why. In comparing our scores at the end, he had a lot more perfect drop but I think I satisfied the crowd more so I won more matchups than he did. I dunno. It didn’t seem very interesting at all. I don’t think I’ll be returning to battle mode.

So for me that leaves freestyle which in my mind is the most creatively interesting part of the the game, but as Tom pointed out, that pretty much takes the “game” part out of Fuser.