Been blowing past this site’s namesake a lot this month thanks to a Steam Deck and Vampire Survivors. 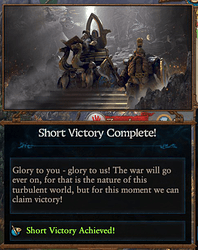 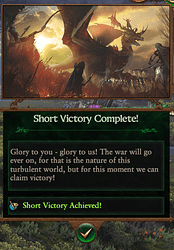 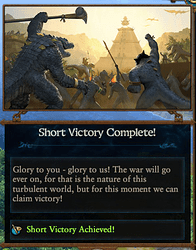 Also short victory for Cathay (Miao Ying), although that was before they patched in the dialog boxes (and quite possibly was completed in August, so not really Game of the Month - September appropriate).

Wytchwood. As a game it’s actually kinda terrible. I really enjoyed the writing, art, and music.

I also completed Procession to Calvary which was certainly something. Farpoint gets a shout for throwing 500 spiders at my face. Not the most fun I’ve had with VR. I did not finish it! :)

The Surge 2 for me - bouncing back to DS2 as soon as I finish it- don’t think there’s too much left. Dismemberment never really gets old, and as soon as I groked one of the weapon types the difficulty settled in nice. It’s one of them soulslike. And it allows dodging in circle and attack on r1 r2, so my fromSoft muscle memory doesn’t get too borked! (Looking at you, Nioh…)

After finishing FFVII remake in August, I wanted to dip my toes back into a FF game, so I picked up FFXII and have been making my way through it. Though I have some criticisms about some aspects of it (all the characters are so damn serious all the time), it is a really solid RPG. Considering it was PS2 game, it does feel a bit ahead of its time.

Also played through Immortality, which had me hooked for four days straight but ended up leaving me a little disappointed. Still, those first few days were so enjoyable that it’s still probably going to end up as one of my favorites this year.

As Dusk Falls - a great take on the Tell Tale style game but with all the boring bits taken out. Really enjoyed this one, most likely my game of the year.

Also finished up Citizen Sleeper which was a cracking combo of simple resource management and excellent stories.

Decided for a change of pace after all that reading / listening, and started playing Immortals Fenyx Rising, and am having an absolute blast. Not really the kind of thing I am used to but it’s nice to get into something so polished and playable.

Most of my time has been spent of Fate-Extra, a sound novel in the disguise of a weirdo RPG for the PSP. It’s pleasant, it’s really stupid and disappointing if you expect it to be on the level of F/SN’s writing, and I also hear the English translation was… shit, might be the appropriate word.

I also delved back into Labyrinth of Refrain, and it has been surprisingly playable for such a conglomerate of mechanics and stats — probably further proof that none of them really matters that much!

I have also spent some time on Everybody’s Golf for the Switch, whose name I forgot right now! Everyday’s Golf? I think there was a pun…

Mostly played Symphony of War: The Nephilim Saga. Not a great, but entertaining.

Bought it when it released but I just started playing Elden Ring and have been having a blast with it.

All this time except for 10 minutes are from September: 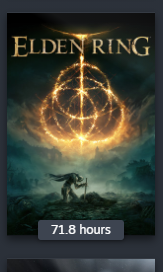 Cyberpunk 2077 , which I’ve finally dove into and am really enjoying it.

Same for me. Guild Wars 2 was my main jam last month.

Finished up a final go through Dragon Age: Inquisition so I could complete all the DLC, a couple of which, including Trespasser, I hadn’t done after my first run back at release.

Now able to move on, I dove into Pathfinder: Wrath of the Righteous’s Through the Ashes DLC (also completed). I liked the low-level gameplay of it, but was kind of put off by the ‘to be continued’ ending. Would love to have wrapped it up nicely.

Also purchased Wylde Flowers on Steam at release. Wylde Flowers is a great balance to my usual gaming that involves much slaying of enemies, as it’s a cozy game of farming, fishing, and being all witchy in a quiet little town full of diverse characters. Very much enjoying it. It’s not got the same vibe as Animal Crossing: New Horizons, and doesn’t have the time sink of collecting things that ACNH did, but that’s not a bad thing and I can see me playing it for a long while.

Star Valor is the only game for me.

Nope, just heard it was fun and stable now.

Star Valor is the only game for me.

First two episodes. I want to watch the rest, but I can’t when my kid is around. ;)

Spent a lot of time in Warhammer 40K: Inquisitor: Martyr. Won over by the heavy dakka weapons, and melee is a little floaty/janky but you have chainsaw swords so I’m willing to put up with minor issues to get to obliterate hordes enemies.

The secret MVP that I almost forgot about though was the beta for Slice and Dice, which just released to full version 2.0 today! That was my “casual” game - it’s an extremely elegant dice-based dungeon crawl, and this update pretty much doubles the content so there’s plenty to see even if you played it in the 1.0 era. There’s lots of unlockables/achievements, but if that’s not your cup of tea, you can unlock everything directly. I play in little bursts and I always seem to unlock things so it’s great brain burning puzzler - a lot of the time it seems like you see the enemy roll at the start of the turn and it looks almost impossible, but then somehow you do a couple combos and suddenly you’re out on top!

Spent a lot of time in Warhammer 40K: Inquisitor: Martyr.

I have had this on my wishlist forever. It has been in EA forever. However, I was bored and decided to give it a try. I am glad I did. It is kind of like a dungeon keeper game crossed with a conquer the overworld campaign where you create armies of minions in your dungeon and then send them out on expeditions which involve you controlling the army and burring and killing everything in sight. Each Keeper has a different mechanic which keeps the game fresh. IE: The evil wizard has immigrants with a very limited number of units you can have and you need to pick in choose, where as the necromancer has unlimited units and crafts them from the bodies of the dead.

It was a total surprise for me and came out of nowhere, but my game of the month this month was Shroud of the Avatar.

A few weeks ago I noticed my wife was playing it again and decided to join her. I had a fairly developed online character with some decent crafting skills too and it was refreshing to play with her and help explain some of the systems, especially the deck building. I even learned some tweaks that I had never tried before! I ended up hitting my first GM, in blades, and then in mining.

They have had some issues with the latest patch release since Thu where they are still down and trying to recover what broke during the update and still aren’t up. The game is fully Offline supported now, though, so I just made a new offline character and played all weekend. Progression offline seems way faster with lots more loot and artifacts dropping so I made some good progress. Got a decent new ranged build that I have never tried before and just finished crafting up my first good longbow and set of epic leather armor. I just unlocked my water elemental, which is a big help as they add some ranged damage and heal you automatically. I am a little surprised I am having such a good time with it.

My wife and I plan to play more once the online server comes back up, but she picked up Grounded during the weekend so may be joining her there before too long .