Must-read feature for anyone interested in Tom Hall, Ion Storm or Anachronox. 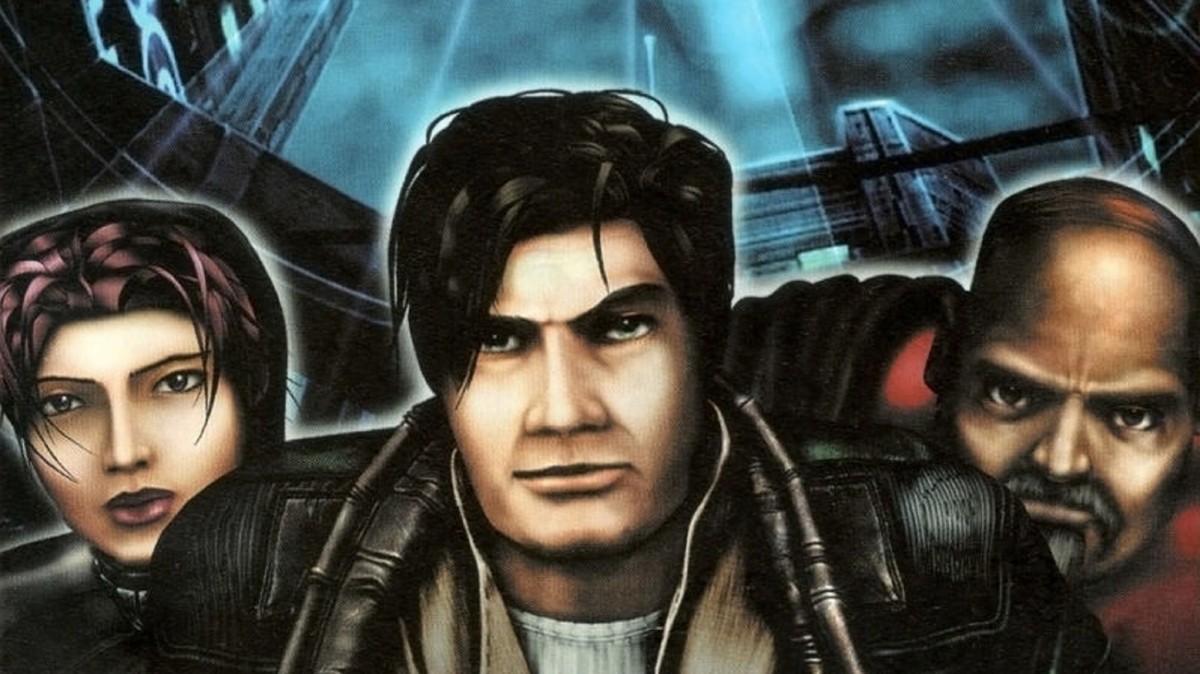 How Tom Hall and a team of inspired believers created an RPG masterpiece during one of the games industry's—and Hall's—most disastrous projects.

That was a good read. I played Anachronox when it was first released. What a weird game. Pretty janky, even for it’s time. Although the author of the article suggests it feels like a finished game, it’s really obvious that huge parts of the game were cut.

But I loved it. A charming game.

There were so many things that were cut from the game, like the black and white ghost ship pirate level that was showed off at E3, and the massive cliffhanger never felt like an intentional end point but a “no more delays - this has to release” kind of situation. Despite its flaws, I bought it at launch on a whim and absolutely loved the characters and goofy humor. 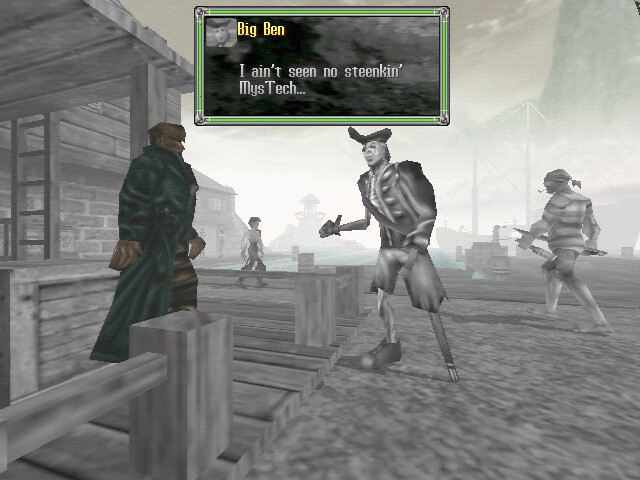 I still hope Hall shares more details about how he intended the story to end one day. Some of the places we never got to visit sound so creative:

Furthermore, according to Lee [Perry], “We created a lot (and you don’t understand how much of an understatement that is!) of unused content”. This included the planet of Matrix 0, the homeworld of PAL-18, Boots’ plucky robo-sidekick. As Tom planned, on this mostly created but unused world, “the crew doesn’t have any of the planet’s currency, so they are essentially poor, and they get stuck in rectangular solids with their picture pasted on them! They gradually earn the Matrix 0 currency, getting more polygons, some animations, attachment points, specular maps, and get on to meeting more important, more well-rendered people they need help from!”. This, on top of a pirate-themed world called Port Presence that was completely in black and white, was one of the many ideas and concepts that never made the final cut. Instead the game ends on what was originally planned to be the halfway point, 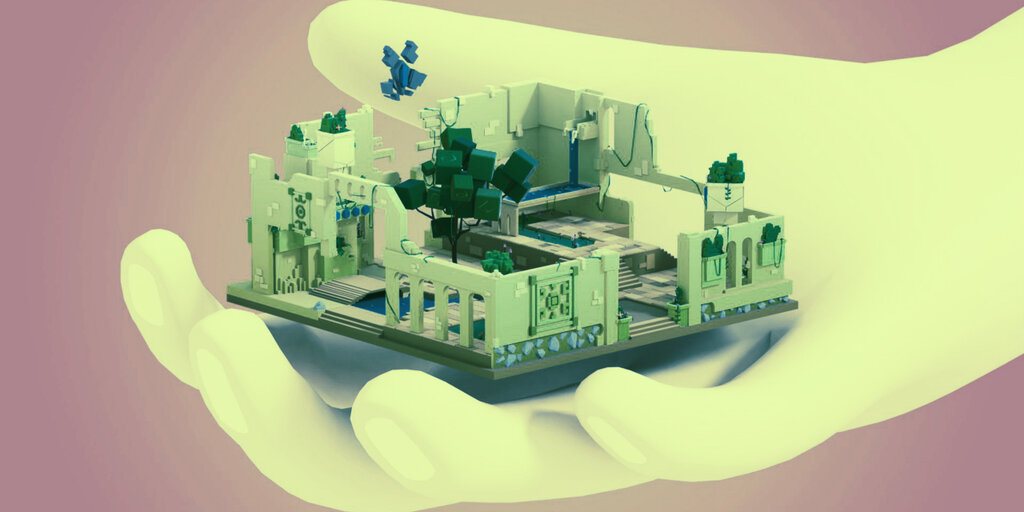 A piece of digital land has just sold for $2.43 million on Decentraland, which will be used as a hub for the digital fashion industry.

EDIT: oops, sorry, that was actually not the link I wanted to post. I meant to post this link, also from Decrypt 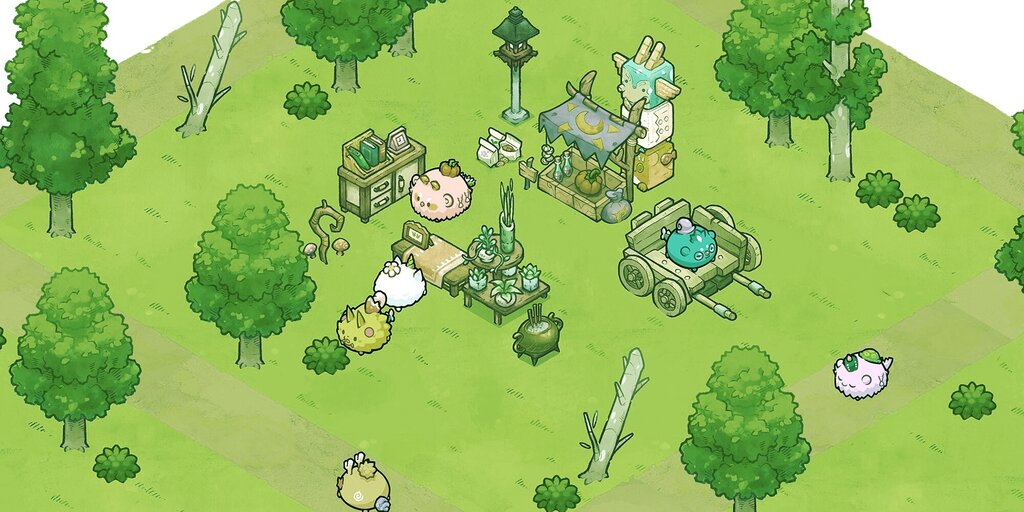 With a piece of land in Axie Infinity selling for a record-breaking $2.48 million, Grayscale has valued the wider metaverse at $1 trillion.

The world can be a very dumb place sometimes.

I mean we all pretty much agree this is some money laundering scheme, right?

Has Second Life made its return to insane Digital Store stage yet? Did any of the corps that created virtual stores in SL ever actually sell anything?

Figured this may fit in here well enough even if he’s not technically a journalist, what with its attention to detail and research: Karl Jobst posted in a new video on the ongoing Wata Games scam saga. 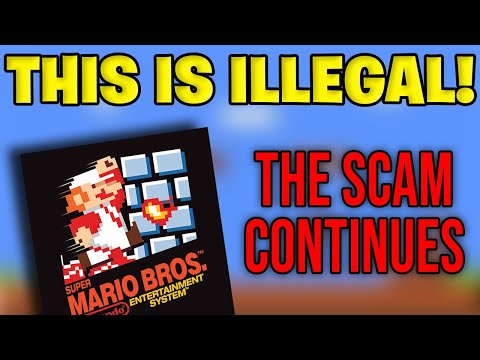 The world can be a very dumb place sometimes.

I mean we all pretty much agree this is some money laundering scheme, right?

A plot of virtual real estate in crypto-powered metaverse Decentraland has sold for a record $2.43 million in cryptocurrency—more than double the previous record of $913,000.

The land was sold to NFT-based virtual real estate company Metaverse Group for 618,000 MANA, the native cryptocurrency of Decentraland, according to a statement by Metaverse Group parent company Tokens.com.

And like most NFT scams, it will be people being both the seller and the buyer, buying it with a second account, to make like if your business is a great investment.

Yeah, there’s an analysis going around twitter this week showing that 10% of crypto users were involved in 97% of all transactions. It’s just a tiny group at the top manipulating prices with fake sales. Bottom line, if you are a cypto bro and not actively involved in fraud, you are in fact the mark.

Ok, I know exactly where this last guy is coming from. 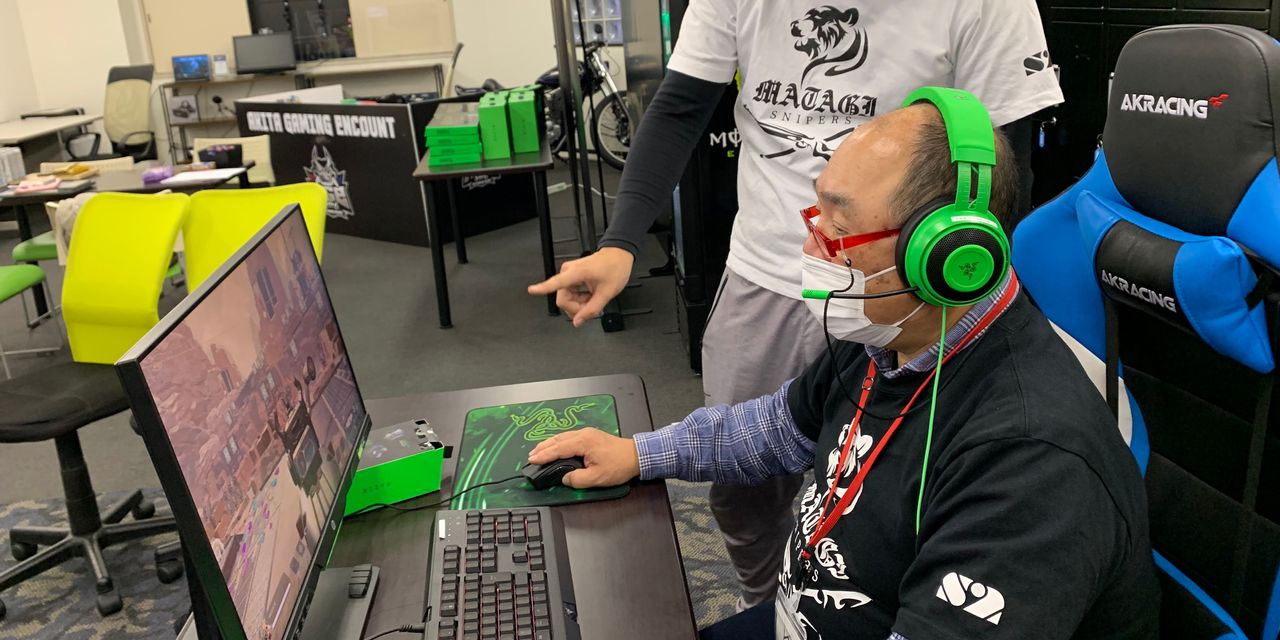 Average age on Matagi Snipers esports team is 68. “It’s better than having nothing to do at home and watching TV,” said one team member.

AKITA, Japan—Sixty-six-year-old Atsuko Oyama shares a goal held by many people a half-century younger. She wants to get 100 kills in the first-person shooter videogame “Apex Legends.”

True, she’s a little rusty, having last faced off against digital enemies in a “Space Invaders” arcade game sometime in the latter part of the 20th century. But after joining Japan’s first senior esports team in September, Ms. Oyama notched 10 kills in a month and feels her enthusiasm growing.

“Watching others play, I thought I couldn’t do it,” said the retired receptionist. “But I didn’t like to back off, so I decided to come here at least twice. And now I am into it.”

Esports promoters who have seen Japan fall behind powerhouses such as the U.S. in videogame competitions think the senior market might be the way to catch up. And if the over-65 set feels a little more energized after blasting a few rival mercenaries, so much the better.

Japan is the world’s oldest nation, and its efforts to boost the size of its younger population have been mostly unsuccessful. It is, however, at the forefront of initiatives to keep old people thinking younger.

Ms. Oyama, whose player name is Mama, tried out for the team known as the Matagi Snipers after her daughter saw an ad soliciting players.

Atsuko Oyama, 66, practices a couple of hours a day.

“It’s better than having nothing to do at home and watching TV,” Ms. Oyama said. She now practices a couple of hours a day at home, sometimes going to acupuncture to take care of her tired neck.

The Matagi Snipers, named for a traditional group of bear hunters in northern Japan, have been practicing since September at their home base in northern Akita prefecture.

With an average age of 68, the 14-person team hopes eventually to compete in professional tournaments in first-person shooter titles such as “Apex Legends,” from Electronic Arts Inc., and Epic Games Inc.’s “Fortnite.”

Before they can gun for prize money or monetize YouTube page views, they need to heed the guidance of coach Yoshito “Lemon” Suda, 28.

The coach said his team initially needed a kick in the rear. Some members, to his surprise, didn’t know how to use a computer, let alone
play a videogame.

“For the first month, it was more like a gathering of some good friends,” Mr. Suda said. “I had to give them a pep talk and tell them, ‘You’re not here for that. You’re going to be professional.’ ”

The members took it to heart, he said, and now he sees some online playing at midnight. At practice sessions, they pepper him with questions.

Mr. Suda begins each practice session with a lecture. In a recent one, he asked the Snipers to write down their thoughts on a piece of paper. Through the exercise, he hoped they would eventually be able to shout concise instructions to one another as they team up to shoot their on-screen enemies.

After the lecture, it was time to play. Masashi “K” Shinoda, 69, was having a hard time sensing the presence of enemies.

“I still can’t tell which direction an enemy or a bullet is coming from,” said Mr. Shinoda, who was more accustomed to battling piles of paperwork in his old job at a school.

This was linked from within the article 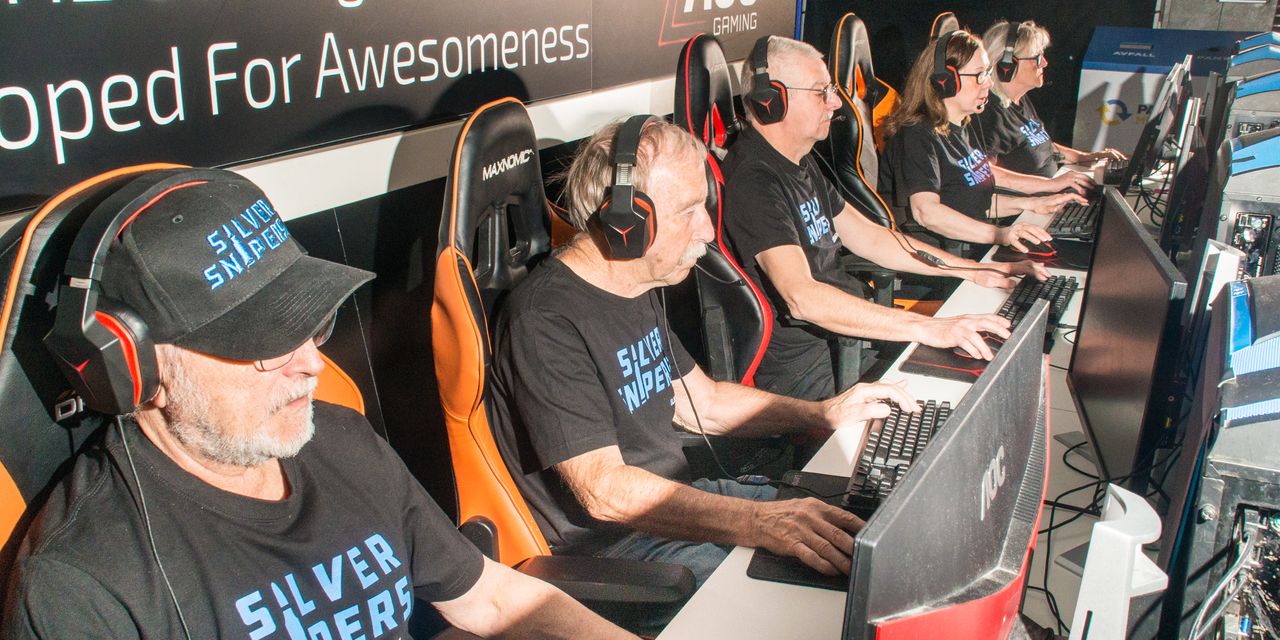 The Next Generation of Competitive Gamers Is…Over 60?

The billion-dollar esports industry skews young and male. The Silver Snipers want to change that—if only they could stop getting killed so often.

This is some peak… something. Don't let how cool the Star Wars Eclipse trailer is trick you: this game will...

Star Wars Eclipse has a really cool trailer, but it's being made by Quantic Dream, which means it will be bad. We need to let go of the dream of it being good.

I posted that in the eclipse thread yesterday. I really liked it. I especially laughed at this part.

But those are the very worst QD games, aren’t they? The problem with Quantic Dream’s games, especially the recent ones, is that they are - and I say this with all the love my heart can muster - awful terrible, no good messes with some of the worst, most facile writing you will ever experience in the medium of video games. Detroit is a game in which a robot character who has been tortured by a human turns to camera and says “who is the real monster?!” out loud. I will never stop talking about how bad the writing was on Detroit. Remember how you could give your group of political activist robots the slogan “I have a dream”,

Surprising to see someone go in that hard on Quantic Dream without even mentioning all the ways that David Cage is a huge asshole.

Surprising to see someone go in that hard on Quantic Dream without even mentioning all the ways that David Cage is a huge asshole.

Probably easier to stay on the safe side of defamation.

Probably the last entry for the year. 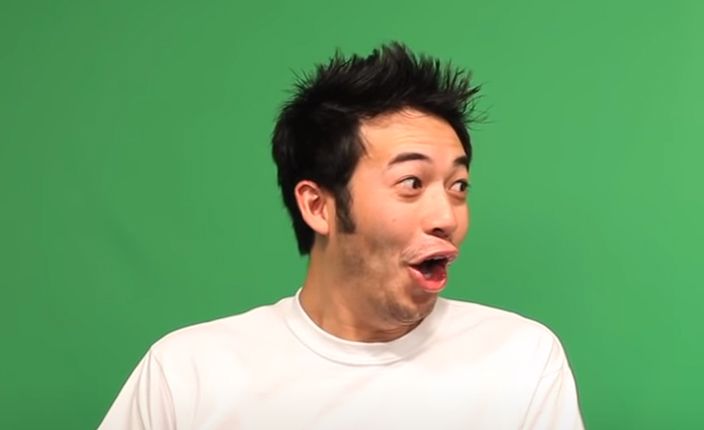 The biggest gaming controversies of 2021

Notable to me only because I completely missed the last entry. Someone violated the United Kingdom’s Official Secrets Act twice to prove they were right about an inaccuracy on the in-game tank model in War Thunder.

To prove that War Thunder’s version of the tank is inaccurate, a player posted an image of a classified UK military document on the War Thunder forum. The image was removed, and the poster was warned that the offense can carry “up to a 14-year prison sentence.”

This is very funny - people keep leaking classified documents about tanks on the War Thunder forums because the in game tanks are not accurate enough!

Someone violated the United Kingdom’s Official Secrets Act twice to prove they were right about an inaccuracy on the in-game tank model in War Thunder.

IIRC, this was also not the first time that has happened on that forum.

It happened at least once again after that one reported in the roundup.