Yeah, I rely heavily on Jack’s abilities – shock field blocks off an approach for several turns; poison can significantly weaken wretches to make them easier prey for overwatches and gets guys to move from cover; obviously Hijack is extremely powerful (both on offence or just to move guys into areas where they can’t harm you or can be picked off); Sonic field allows you to chainsaw/bayonet to instantly kill deadly Grenadiers (or Wretches), which is huge; smoke field allows you protect guys from one shot kills - I’m sure I’ll respec to use some of the buff auras to use against bosses too.

I’m about half way through my insane run now (although not really, as there are more sidemissions in Act 3) and approaching the Act 2 boss - early Act 2 was probably the easiest part of the run, as I’ve gotten better at defence (planting grenades to cover retreats, using heavies more effectively in overwatches to disrupt/suppress instead of going for kills, made a big difference), as it’s also before Therons and Kantus’s get too annoying. Not really sure how I’ll handle the 70% defence buffs that Kantuses give.

I feel like I could handle the regular missions on higher difficulties no problem but the bosses are just so bullet spongey they wear me down.

You can kill the Act 1 boss really quickly just by ping ponging him between a sniper and a heavy, and using the other 2 members and jack to manage e-holes and take potshots. I completely ignore the guns and just focus on the tanks.

Bad design really, totally killed my interest in the game, which was a shame. It was pretty good up until that point.

I’ve never liked the boss fights in this series. Much as it was somewhat cool to see the large creatures from the 3rd person shooter series make an appearance in Tactics; I find the boss fights just stressful and annoying (largely because of the additional enemies, not the bosses themselves).

I’ve done all the regular Gears games through on Insane solo and the worst were Gears 1 and 3 for the final bosses. I still have nightmares about the final Gears of War 3 fight, in particular. It’s remarkable I put myself through that (and yet get “rewarded” with an Achievement percentage in that game of about 20% since the points are so heavily weighted to multiplayer). Really wish multiplayer and single player achievements were tracked separately - hell, I did Gears 5 on insane solo and 50 levels of Horde and a bunch of other multiplayer and I still only have a rating of 26% complete. Really annoys my OCD, lol. Then again, I thought Gears Tactics would be an easy 100% since it’s a single player game, and the prospect of only being half-way through the 10,000 kill requirement after doing the campaign 3 times is just disheartening.

Yeah, the Gears games get an exception from my gaming achievement OCD because those ‘Seriously’ achievements are just for the birds. I don’t think I like any game enough to put myself through that, certainly not a multiplayer one.

Yeah, which makes me wonder if they initially had (or still have) more story-based DLC planned, which would bridge that gap so that the achievement would more naturally unlock through reasonable dedication (and maybe the 20 veteran missions).

That all makes sense. Yeah, the nice thing about Jack is that he can always immediately recloak, which makes the pursuit missions a joke with a scout or two. He doesn’t really have any offensive capabilities though, but shock field is sufficiently disabling. In my first playthough I used the “create boomshot” skill too (maybe even torque bow too), but I think there are likely better specs for him. although those would certainly help for crowd control.

I definitely heavily use grenades. Normal lancers seem underpowered so I have most of my support/vanguard team specced as grenadiers who also chainsaw/bayonet. The Scout’s gnasher can be fun to Rampage out a bunch of guys, but it seems like mines are too valuable to ignore. I didn’t realize they could also kill e-holes before they pop.

Yeah, the Gears games get an exception from my gaming achievement OCD

Wow, you weren’t kidding on your achievement drive - impressive record. I’ve historically been a PC gamer, but have platinumed most of the playstation games I’ve played, like Dark Souls, the ps3 Demon’s Souls, the Uncharted games, etc. - I haven’t really played many games on the Xbox other than the Mass Effect series and, as an additional playthrough, Oblivion, and the ones I have played tend to be ones with significant multiplayer components so I don’t even really try to max out achievements, like Gears of War 1-5 and Halo 4. I really don’t like multiplayer shooters on consoles, although I have liked Gears multiplayer horde, and the similar Mass Effect 3 multiplayer. I played through Gears 4 multiplayer and a couple of acts in Gears 5 and didn’t even pop a few related achievements, bah.

Anyway, on the Gears Tactics Act 3-Mission 8 missions on my insane-jacked run, and have enjoyed it. The beginning of the Insane campaign actually felt the most difficult, although it’s still easy to have to restart missions since giving anyone a clear shot at your guys is instant death. But I love really digging into a game’s systems and getting to really know them, and considering abilities that might otherwise be ignored, etc.

Jack really helps a lot though, and the more powerful he gets the more he can help - you can just keep him invisible and blocking a control point in the control missions, for instance, and use all your guys to protect the other control point until you’ve drained it. That said, there are some stupid control side-missions on Insane, like the 2 person control mission in the 3-2 side mission. That one and the 3-8 side mission where you only get 2 AP per guy just seemed annoying so I avoided them.

Ha, yes, my gamerscore has reached the point where it’s a little embarrassing. I find it satisfying to complete a game’s list of achievements where possible (or at least not crazy burdensome to do so) but I’m less interested in the actual score, which is starting to creep into ‘I may have a problem’ territory.

Yeah, I can’t imagine doing it for more than a tiny fraction of games. But for a few all-time favorites that I’m happy to keep playing, I will, and I appreciate having those extra goals to shoot for.

I don’t find that generally to be the case, although it definitely varies by game, and genre, and I’m sure our tolerances/enjoyment also varies. For RPGs, getting platinum or 100% is usually pretty easy, at least with a couple of play throughs (which I may not get around to for a while, and may not be necessary). For loot shooters - the time involved would be interminable to me.

I wouldn’t spend time with a game if it’s no longer fun, but I prefer to play fewer games and invest a lot more time into them than most people do. I would rather not play a console action game at all than just play it on “normal” or easier difficulty, since that seems to be designed to allow children or very casual gamers to get through it (some exceptions by genre, of course), and I’d feel that I’m completely missing the actual “game” and was just superficially skipping through the storyline (which isn’t really meaningful).

It varies though. I hate level-scaling difficulty in RPGs, for instance, and combat isn’t the most important thing for me in many open world games.

I prefer to play fewer games and invest a lot more time into them than most people do.

Gawd, I wish I could do this. I’m so stuck on more, more, more…and with a kid who always wants the latest, its hard to concentrate fully on any one game. We tend to buy new games 3-5 times a month for any console and get oversaturated with too many games. I miss the old, old days with so many less releases.

Well, I stuck it through and popped the insane campaign trophies. Have an Ironman run going at the end of Act 1, but not sure if I’ll bother seeing it through, although there’s a couple of additional achievements within easy reach, so maybe I’ll stick through it. The last battle was annoying (mainly because I forgot the range of the boss’s blowing attack extends to the sublevels in front of it, but the bosses on Insane are really not the hard parts, as you likely have a pretty good system already if you’ve played the campaign through already. 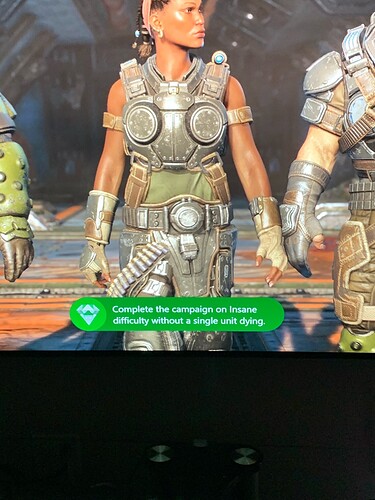 Added an Ironman achievement. Debating grinding Grubpocalypse for the 100% Achievement, and figured out a decent way to do it (using a team of 2 scouts at the end of a rescue mission and just dropping mines at respawn spots near the exit - since tickers spawn with them, you can kill 5 at a time easily). But it would still probably take…hours, for something pointless. Maybe on one of my interminable zoom calls. 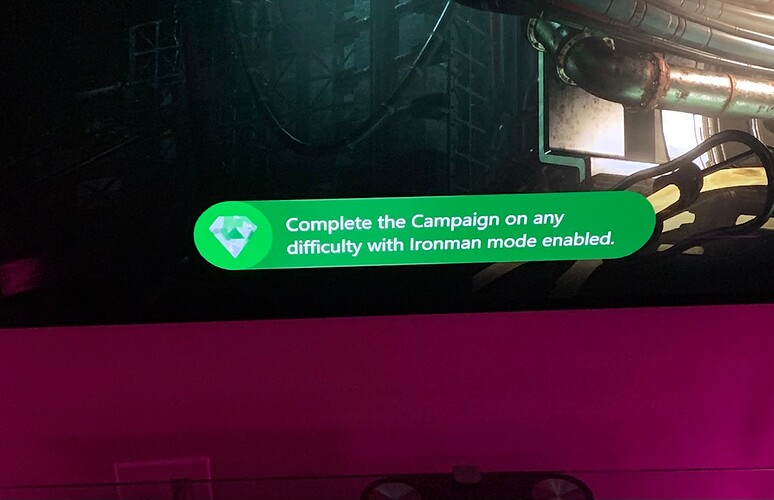 Did you already complete the 20 veteran missions? How many kills are you short?

“pointless” can be applied to anything you aren’t interested in… GO FOR IT! :)

Played a lot of this when it first came out but never finished it. Decided to start a new game tonight and play to the end this time, it’s a great game.

Anyway got to the part where you can recruit some soldiers and man, JD has really let himself go… 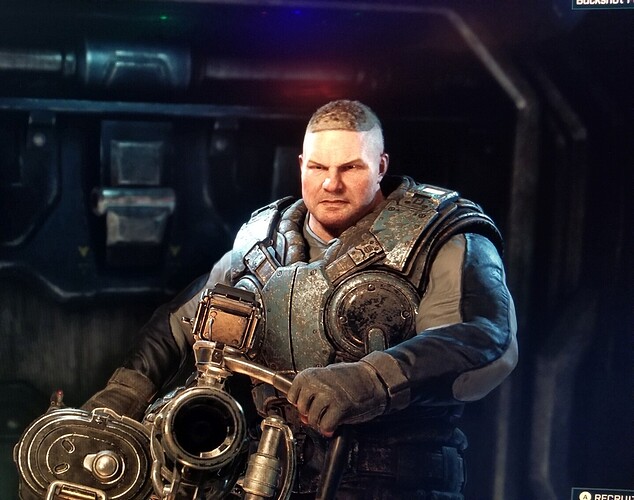 Just had a friend point out to me this is 10 bucks on steam right now. For that price I suspect I’ll have to check it out.