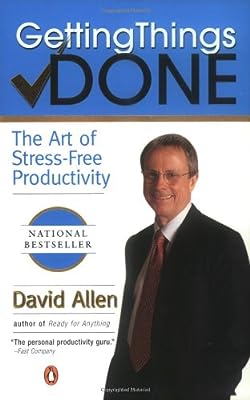 Getting Things Done: The Art of Stress-Free Productivity

Pretty good! The dipshit hokey self-help quotes are a side issue, thankfully, keeping the focus on the planning process (work backwards from the goal, assign dates to everything) and the management process (three buckets for your inbox: do now, assign to someone else, schedule for some point later).

I find the “keep your damned inbox empty” one the most useful. Once you’ve got everything sorted into the buckets - waiting for someone, do later, rexamine for scheduling later - it clears a lot of mental space to focus on the next thing you need to crank out.

There’s some hilarious cult aspects - people blathering about the beauty of file folders! LABELERS, for the love of Palpatine! 20th-century focus! Unbelievable categorical and income assumptions that everyone’s a rich “knowledge worker”! But altogether, remarkably useful for framing how to deal with the big ass pile of things to do you no doubt have hanging around in your head.

Oh, and is there an easy to use, non-ugly task management system out there somewhere? Outlook’s “Tasks” have functionality and look like something out of the Soviet Socialist Republic of NT4 graphic design, but they’re the best I can find. Onenote, maybe?

Cult aspects aside, the system rocks once you understand how to use it. I’ve been in a serious producer role over the last 6 months and this system probably saved my job.

I’ve been using the “Pig Pog” method, and like it better than the basic GTD implementation, since you don’t have to do all the weekly clean up work. It works with Outlook. You can also use backpackit if you want something more web friendly.

Here’s that wiki you were looking for. But since it doesn’t link with my palm pilot it’s not good for me.

There’s also a nice outline and some good graphical representations that you can find lower down on this page.

And you should buy a labeler…

Labeler my ass, capitalist running pig dog! I don’t even have anything that’s non-digital, what would I use a labeler for?

I think I’ll check out GTD. I’ve heard good things about it for a while now. My job is such that I almost completely manage myself, and rarely work on a deadline. I sometimes get so awash with all the possibilities of a blank slate that I don’t use my time effectively. When you can do almost anything it can be hard to decide what to do first. Or last.

What I really want right now, though, is a good piece of to-do software. I’ve looked around quite a bit and can’t seem to find exactly what I want. I want something that lets me create to-do tasks, assign them to categories (projects), and then EASILY prioritize them and move individual items up or down my daily to-do list. It also should keep my completed tasks and ideally record the date on which they were marked as completed. Major bonus points it it can have a small desktop footprint and minimize to the task tray.

I’ve looked and found a few things that come close, but nothing fit perfectly. I’m currently just using text documents on a Notepad-on-steroids program, but it’s cludgy. Any suggestions?

I can’t believe you wimps need a book to figure this out! No wonder you’re no good at modern flight sims.

I bought this book way back when it first came out. Still haven’t read it.

I’d heartily recommending reading chapter one then skipping to part two of the book.

Bull, it may surprise to learn that humans can come up with improved ways of doing things and communicate those ideas to other humans.

The humans that take advantage of this are thought of as “intelligent”.

The humans that take advantage of [GTD] are thought of as “intelligent”.

Intelligent and wimpy are not mutually exclusive qualities. BTW, do the quotes around intelligent indicate irony? :)

Compared to a normal book, but for the genre it’s rather straightforward. You should flip through the horrors it sits next to at b&n.

[quote=Andrew Mayer]The humans that take advantage of [GTD] are thought of as “intelligent”.

Intelligent and wimpy are not mutually exclusive qualities. BTW, do the quotes around intelligent indicate irony? :)[/quote]

Either that or condescension.

Based on this thread I picked up this book and read it last week. On Monday I implemented the system at home. On Tuesday and a good chunk of today I did the same at work. I’ll have to see if I can stick with it, but so far I really like the concepts. My company had recently changed floors in our building and the move had left me with a ‘huge amorphous pile of undoability’ and now I feel like its under control and only a matter of time before I’m completely caught up.

I’m using backpackit for my home action lists, so I can refer to them at home or work or by blackberry. At work I’m using plain folders and lotus notes folders. As time goes by I may want to tinker in this area, but I can’t imagine I’d buy a labeler or get too crazy with systems. Although one of my coworkers thought I had come down with an instant case of OCD.

Thanks for mentioning this Jason, and thanks for adding your recommendation (and groovy links) Andrew!

Although one of my coworkers thought I had come down with an instant case of OCD.

That is a risk. It’s like a drug - productive OH GODZ RUN TO THE STORE AT 2 AM TO GET ONE MORE ITEM

so is backpackit a good tasklist? I’ve been wanting a taslklist like Jason, only more interoperable, so I can easily shuffle tasks between people.

Thanks for mentioning this Jason, and thanks for adding your recommendation (and groovy links) Andrew!