Their worlds are amazing. The gameplay is repetitive, I agree, though it’s a style of game I rather like in general so it takes a while for me to overdose on it. I never finished Wildlands, so I should probably go back to it and try to wrap it up.

I really enjoyed the escalating challenge of Wildlands. As you progress you get alternate ways to deal with the new elements.

For example, at the beginning of the game no bases have SAMs or drone jammers. It’s easy to assault these bases from the ground or fly an armed helicopter in and lay waste to them.

More advanced bases have SAMs, which makes helicopter assaults impractical. They also have more elements to deal with, such as lights, machine gun nests, and more snipers. So you get into a rhythm of scouting with the drone, using your sync’d attack with your AI or co-op partners, and working your way into the base.

Eventually the drone jammer makes scouting difficult. Then you can use the rebels to scout for you. Or sight the drone jammer for a mortar attack. Or air drop in an ATV for a frontal assault.

While I agree the cities bases aren’t terribly different the variety of the game comes in how you approach each one.

Overall Wildlands is the best co-op game I’ve played in a very long time, hands down.

The spec ops dlc was also quite good, adding in a couple of new elements to deal with.

If they got rid of the endless waves of reinforcements magically appearing, the sam turrets respawning and the UTTER FUCKING STUPIDIDY of your ai team mates I’d have enjoyed it a lot more.

But the scenario/scenery is really nice. Like driving around listening to a corrido before you find the asshole and kill him.

Reinforcements are stopped by not getting detector and disabling alarms.

You AI team mates are dumb. Using them within their limits is important. Sync shots are great because the AI (almost) never misses. It allows you to take down roaming patrols much more easily than with human companions.

That said, having friends to play Wildlands with is the best version of the game.

The Predator mission was awesome: 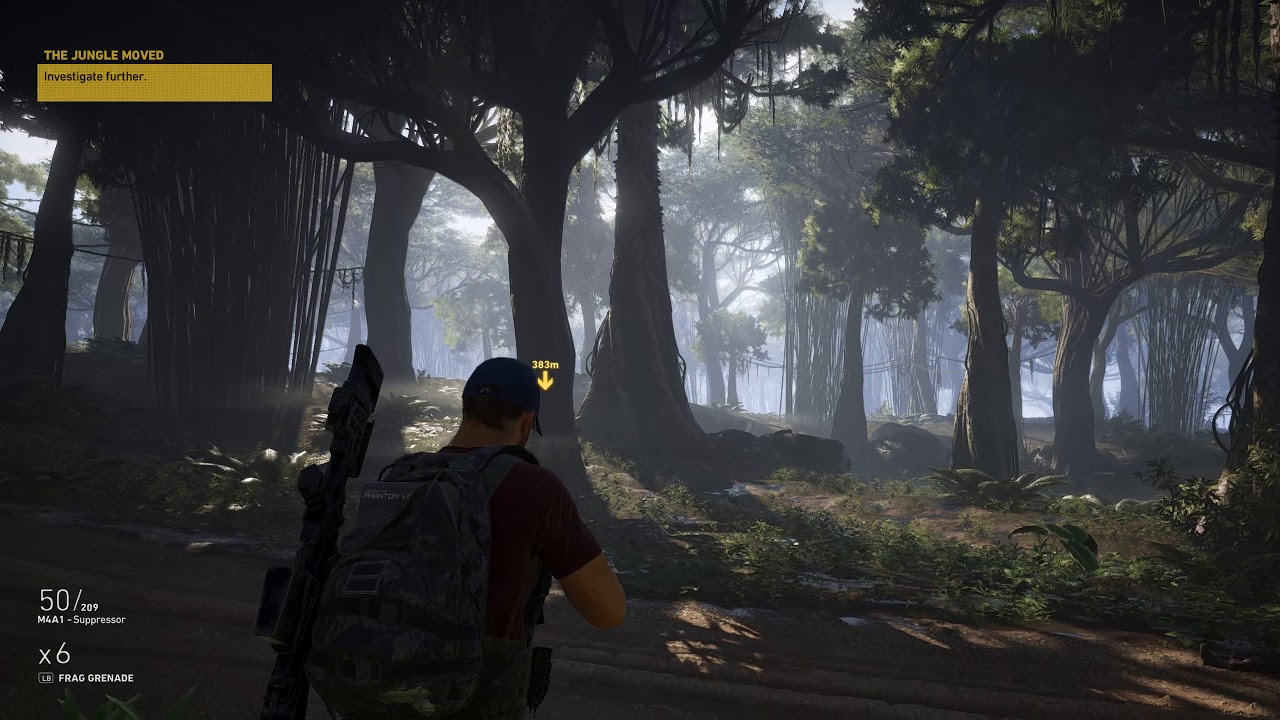 Anyway, that’s done. 54 hours to do every mission, collect every weapon and upgrade and hunt down every cartel member. The alternative ending was lame, I prefer the one where Bowman goes to prison. 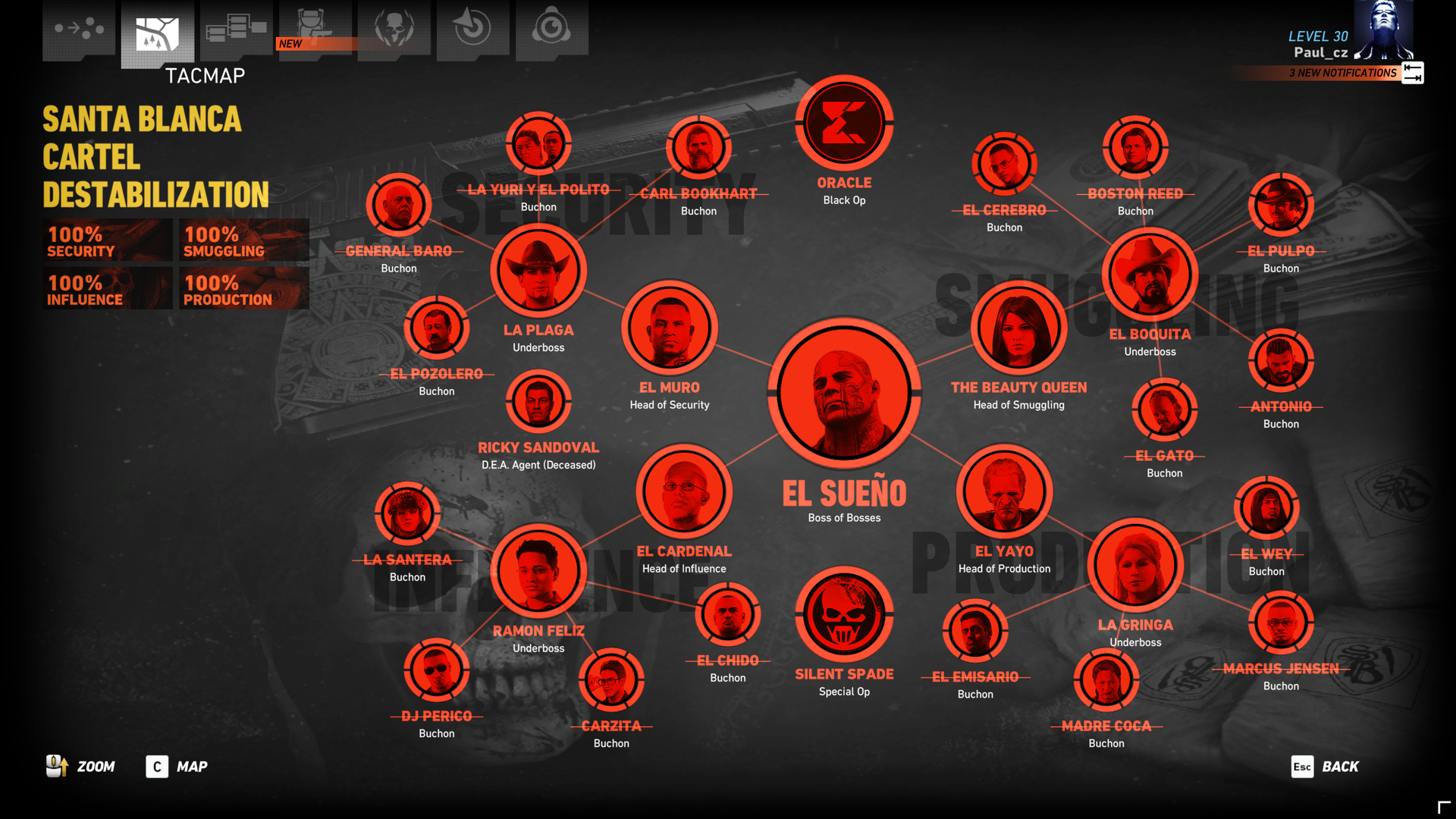 That was enough Ubi copy paste for a while…think I am going to skip Breakpoint.

Yeah it took me four tries - the video depicts the first.
He has a TON of HP and when low, he starts shooting very quickly, but eventually he does go down. On my third try, I took him down, he started self-destruct and laughed, I wanted to get a good look at him and started running too late, so the explosion killed me and I had to repeat the fight yet again. Did not make that mistake again :)
All three AI ghosts were down from the explosion though.

Right up until the point where you actually fight the Predator and it all goes to shit. I think everybody dies at least once to his bomb.

The plasma caster is so OP.

The trick I found is to call in rebels. Lots of them, just before entering the conflict zone. They are good fodders and help you spot the Predator. When he is shooting at the rebels he is not shooting at you. And stay near the edge of the conflict zone so he will come from one direction. If you stay at the centre he can come at you from all directions.

I agree with this. Can’t tell you how many times my buddy and me have tried and failed… Called in rebels and turned the difficulty to arcade. At least we get to the “second phase” where the predator starts shooting those rings or whatever it is, but sooner or later one of us gets hit & the other dies trying to revive the other.

Guess we’re just too old and our reflexes are too slow and its probably easier if you are 4 people, but with just the two of us I don’t think we’ll ever manage.

It is actually easier playing with bots than humans, especially if there are only two of you (playing with 3 other humans with no clue is probably worse). You will do all the heavy lifting anyway, the bots are just there to heal you if you are down.

Yep, I gathered. We’ll keep chipping away at it, perhaps we’ll be successful someday! Perhaps we’ll need to recruit and train another human into Wildlands, just so he can finally help us take down this alien monster!

Yeah it took me four tries

Sheesh. You really just need to do it solo with AI buddies :)

Watch some youtube on how to take it down. Positioning is also key. You want him to attack you from just one side with another side blocked by trees, or you can duck into tree cover. And use thermal vision to spot him and his laser trail in particular.

I positioned myself plenty, to no avail. Don’t think I tried vision modes though.

Damn it man… That was the trick. Tried it the AIs today and my second attempt killed the bugger. Couldn’t even say that I hit him more often than I did on the attempts with my friend or that the AI characters hit him much either.

I suspect that there are some balancing shenanigans going on behind the scenes that as soon as you are playing coop then the difficulty is geared for 4 players and not two.

Oh boy. What a slog.

After finishing Wildlands and having bounced off of Breakpoint, we decided to give the Division a try since it basically fell into our laps for free this week.

Played for a bit and just established a base and I must say all the gazillion numbers and levelling doodads are pretty off putting. Seriously how do better kneecapguards improve the damage my gun makes?

Anyway, hopefully I’ll get used to every single mechanic in the game being a grindy make-number-bigger thing and will manage to enjoy the seconds of actual shooty gameplay in between…

Just got Wildlands and am digging the base game. Fired it up around 10pm and suddenly it’s past midnight. There’s always something nearby to check out, some new intel or a convoy or a skill point or what have you. Good stuff. I’m still way too underpowered and hapless to feel like an elite squad but I’m looking forward to it.