The best thing about Glastonbury is watching the British weather switch from a week’s worth of heatwave to an afternoons worth of tropical monsoon, followed by watching people traipse about in muddy fields resembling The Somme 1917. No one should be suprised really, both Wimbledon and Glastonbury are on this weekend, that guarantee’s rain. Usually you need to bring wellies and a mac, this year I think a scuba diving outfit might be a better idea. 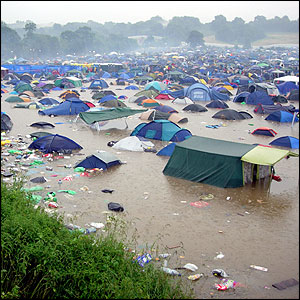 More here. When you see pictures of drunk/drugged festival goers rolling around in the mud having a good time, remember, the toilets used by 150,000 people for 3 days have now … escaped.

My inability to afford a ticket this year doesn’t seem so bad now.

I thank the Lords of Glastonbury for breaking this goddamned heatwave.