I feel like Gloomhaven deserves it’s own thread. There are enough of us playing and it’s definitively deep and interesting enough to warrant it’s own thread, I believe.

For those folks that know what Gloomhaven is, this thread is for discussing everything from storage options to strategy, but let’s keep spoilers to a minimum or at least marked as such. This is a game that’s designed to be experienced slowly, over time, with sealed envelopes and most of the character classes hidden until they are unlocked, and I’m sure everyone want’s to preserve that experience for one another. 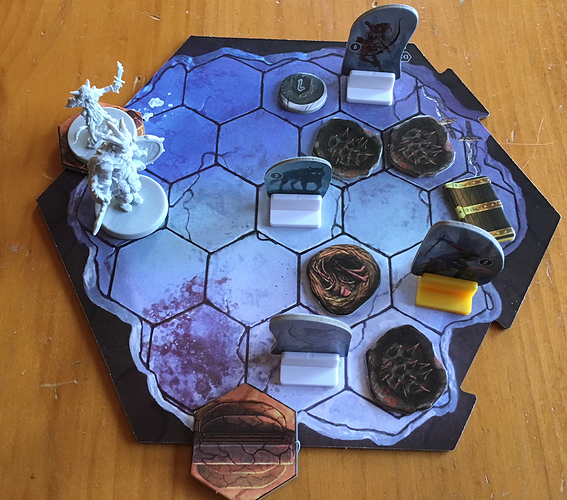 For everyone else, welcome to a thread about a board game that I’m so excited about I’ve actually busted it out and played solo a few times, and got my son to play a game with me, before we get our normal gaming group together for our first real (actually tearing off character sheets and tracking progress) campaign! What is Gloomhaven?

To put it briefly, it’s a fantasy RPG where each player assumes the role of a character (there are six classes to choose from at the start, with eleven more unlocked during the monster-length campaign) and they form a party. Multiple parties can be formed, but the world is a living thing, where achievements and choices made by one party could affect the other party, or subsequent games, in small or big ways. For instance, as you progress through the campaign, you are unlocking locations on the world map (sort of like discovering a new location in Fallout or Skyrim), but also bigger changes like the “Prosperity” level of the city of Gloomhaven itself, which introduces more items to the shops and starts new characters off on higher levels of experience.

The combat is played out in turns, with no one player controlling the enemies but rather a clever deck of cards for each monster “type” is in play to tell the heroes what the monsters do in a given round. Following simple game logic (enemies attack the closest enemies, for instance) the players play their actions while the enemies perform theirs, in initiative order.

Recently, I put together an example of a turn I took in a random map I threw together quick myself for my cousin. I put it together in a single PNG document you can read here, if you prefer reading to watching one of the lengthy videos on YouTube. 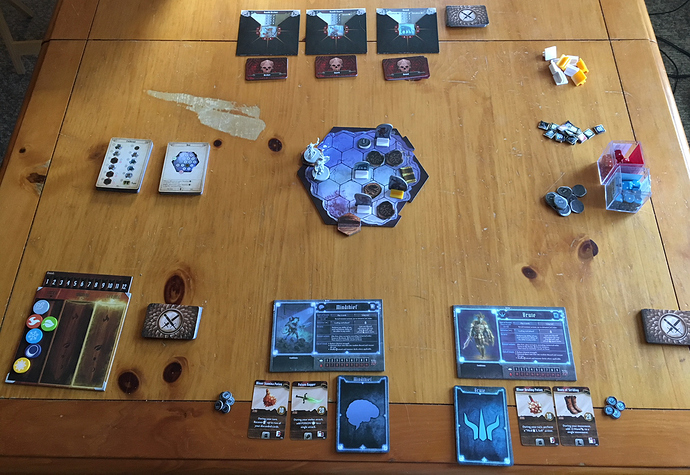 So that’s a bit about Gloomhaven. I’m no expert of course, but I’d be happy to answer any questions folks do have and for those that are experts, I look forward to learning more about the game, myself!

My copy arrives today! I unfortunately will be playing mostly solo, and I’m thinking of getting the removable stickers so that i can start a second campaign if/when I get some friends who I can play with regularly.

How long is the campaign expected to take?

I’m in a 2 player campaign with a friend and we’ve played 3 scenarios so far (played the second one 5 times and the third twice) and I’d say we’re averaging about 45-60 mins a scenario. There are something like 95 scenarios so…yeah over a hundred hours easy.

I believe several of the 95 scenarios (or so) are optional and won’t even show up every campaign (believe it or not) because they are generated through not just events but choices made during said events. But yeah, I expect this to be hundreds of hours to “complete” the campaign. There seems to be incredibly late game content but I haven’t wanted to peek ahead too much, so I can’t say for sure. Character classes all have skills out to freaking level NINE though, so that’s a thing.

@Scotch_Lufkin, you mention playing solo a few times. Are there any one-off scenarios that are meant to be played solo outside of the main campaign? I’m itching to try it but my wife won’t be ready to play it with me until we finish our Pandemic Legacy Season 2 game (we’re in October now - 3 more months). But, I don’t want to play anything solo if it would affect the campaign or maybe ruin some sense of discovery when playing with my wife.

Sort of, there are actually “random scenarios” that can be generated with these ingenious (and very thick) pair of decks. 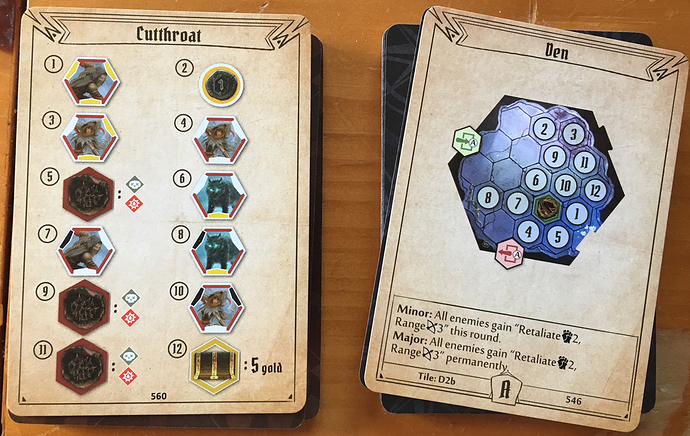 In fact, these results are exactly how I set up the first room to the solo-dungeon I ran in the picture(s) above! You can do these forever, with nearly limitless amounts of content here, and you could even track the characters that run them (with regards to XP or Gold) if you wanted to. I choose not to, so as not to start with more gold or XP than my buddies when we play for real, but it was fun to do for a Sunday afternoon. It only took about 10-15 minutes to set everything up, and about half an hour to run through that first room, too. Once you get the box organized a little, it’s a pretty easy game to set up and break down. I find.

Scenarios numbered 1-50 or so are part of the actual campaign, which contains several distinct story arcs that tie together. You won’t play all of them, however, as doing some scenarios closes others off- a fairly minimal number, I think, but it’s definitely there.

The others numbered 50-95 are side quests and whatnot. Some are drawn randomly from a deck (not really a spoiler- I think you get one from a chest in the first or second scenario of the game). Some are unlocked at the end of Personal Quests. I think it’s fair to say you probably won’t have access to all of them during a campaign.

All in all, I expect a campaign to play through 50-70 scenarios.

I’m playing solo. I’ve completed 5 scenarios so far, in 8 or 9 attempts. I failed the first one twice, before getting a grip on the rules.

I started out with just two characters (spell weaver and brute) before adding a third after the third scenario spoiler[/spoiler]. To be honest, I’m thinking about going back to two, but at the same time, I also want to try out as many different characters as possible, so I might stick with 3.

I’m enjoying it a lot, so far, but I’m strongly considering buying an organizer, as it takes a lot of time to setup. Even between scenarios, when everything is already out of the box, finding all the right monster bits and cards and map tiles takes a long time. Unfortunately, the organizers all seem to be sold out around here, so I’ll probably have to wait another month or two.

Regarding length, I believe that agapilot is right that it has 95 scenarios, but you won’t see all of them in a single playthrough. Some scenarios are randomly awarded, and some are locked out by events, achievements and so on. I read somewhere that 50-70 in a single playthrough is realistic, but I have no idea if that’s accurate.

Do any of you guys use card sleeves? I’ve never considered them for any other game, but since I’m already considering buying an insert, I thought I might go for some sleeves as well.

Also, during the 2nd Kickstarter there was a separate set of linked scenarios that turned a mini-campaign. I know the PDF is floating Aaron’s, probably on his website and BGG.

The designer has released some solo scenarios:
https://boardgamegeek.com/thread/1737962/17-new-solo-scenarios-released

I’m playing solo. I’ve completed 5 scenarios so far, in 8 or 9 attempts. I failed the first one twice,

Funny you should mention that. I made my first attempt a couple of weeks back and was more or less annihilated on the second turn. I’m thinking I will disregard the increased difficulty rule for solo play.

I’ll have to start reading the rules and try some of those out. Thanks!

I’m thinking I will disregard the increased difficulty rule for solo play.

Do it. It’s a stupid, stupid rule.

I understand the rationale. If you have perfect information about each party member’s hand, initiative, and chosen abilities, you theoretically have a leg up compared to parties that don’t share that information. But the monster initiative values are still random, so they’re going to throw off even your most perfectly planned turns. And I think they’re assuming the solo human player is going to play optimally 100% of the time, which (for me, at least) is far from accurate.

It makes sense on paper, but in practice, there’s no reason to increase the difficulty for solo play.

True, initiative bit me badly. I actually was set to go fairly quickly, but the enemy deck drew one of their better cards (one of the ones that recycles the deck at end of the turn) that had a 15 initiative. It went…poorly from there.

Rule of thumb on difficulty: baseline is average party level divided by two and rounded up. If you’re struggling, knock things down a level. If you’re sailing through and don’t want to be, go up a level. It’s designed to be modified based on what you need from the game. Don’t worry about whether you supposedly have it easier because of perfect info etc, just worry about whether you are challenged or not.

It’s designed to be modified based on what you need from the game.

Somewhere, probably quite far from the Twin Cities area I’m fairly sure malkav lives in, Tom and Dave Long had strokes as this sentence was written ;-)

To be fair, I think the default difficulty calculation is damn near perfect. Scenarios are challenging without making everything feel dire. We usually wind up with at least one person dead and the rest juuuust skating by.

I’m enjoying it a lot, so far, but I’m strongly considering buying an organizer, as it takes a lot of time to setup. Even between scenarios, when everything is already out of the box, finding all the right monster bits and cards and map tiles takes a long time. Unfortunately, the organizers all seem to be sold out around here, so I’ll probably have to wait another month or two.

You are in the EU, aren’t you?

This one is good, EU based (so fast shipping and no taxes) and readily available.

We’ve never had to turn the difficulty down, but we have hit patches where we were stronger than the curve. A high level music note class makes for a hell of a force multiplier.

And I think Tom’s big objection to user-adjustable difficulty is not having an incentive to adjust for greater challenge. Gloomhaven gives more experience and cash for higher difficulty.