Yep, we failed the first fight hard the first time we played. It definitely gets easier as you go. Although plenty of missions are still difficult enough to fail even when your party is stronger.

Learning how to manage your cards is a huge part of the game and it’s very easy on your first try to not budget your burn cards well and end up exhausted.

I hadn’t played this in a while, but with the EGS giveaway, a couple of my friends and I played multiplayer for the first time. One friend and myself on Steam and the other guy on EGS. I just hosted a Guildmaster mission on easy and we fumbled our way through it. I like it better with people than just me playing the characters.

The only issue we had was the EGS guy locked up when the battle started. He had to quit and rejoin and I added him back to the game and everything was fine after that, so I don’t know if that is an issue or a fluke.

Learning how to manage your cards is a huge part of the game and it’s very easy on your first try to not budget your burn cards well and end up exhausted.

That was my problem. I was using all my cool abilities too early and burning cards in the first room, which of course just snowballs the exhaustion mechanic since you don’t get to use those later on before taking additional rests. Now that I get the rest mechanics better, I’ve been surviving much more easily.

Picked this up for free from Epic. Got wrecked twice in the first dungeon. Was about to uninstall when I figured out that you keep loot and XP even if you fail. That’s very different. I think it took me 6 tries during which one of my toons hit level 2, but I finally won.

Congrats! That first mission is a tough way to start.

The mechanics and strategy are far enough off the beaten path that it takes some time to get comfortable, but imho, well worth it.

I assume you noticed the difficulty levels. Definitely a game where it’s advisable to tone down the difficulty while learning, and then notch it back up after a few dungeons when you are comfortable with the way things work.

Notably all the difficulty level does is change the strength of the monsters slightly, which means they will hit slightly less hard and/or have slightly fewer hit points. So it’s definitely not the equivalent of a video game’s Story Mode (or whatever), there’s still plenty of game to be had and you’re still training yourself for later levels (and for harder difficulties).

That’s not quite true. There’s an inflection point around midway where they’ll start to inflict status effects or have extra shield or similar depending on enemy type.

And being aware when you’re heading into a mission with an enemy with a lot of shields can be really important. I can’t think of anything else where it might be quite so critical to potentially switch up your decks/items than that. Up against a 4 or 5 shield enemy while you have no pierce or ability to wound? Good luck!

There are some missions that lean pretty hard into enemies with poison or wound, and that’s useful to prepare for, but nowhere near as much as shield. That said, when there’s only that one Vermling shaman with four shield, you can sometimes just bull through it with a couple big hits. For fire demons, though, yeah, you’re gonna want at least a repeatable wound option (if you can’t pierce), as they very rarely come alone.

Or a Cragheart who has cards equipped that just do damage and aren’t attacks(and therefore bypass shields). I think Cragheart might be my favorite character for its just well-rounded skillset plus plenty of health and a good hand size.

Oh yeah, that’s another good one. That particular approach starts to lose effectiveness at higher levels (when these shield effects come more into play) because they’re capped at one or two per turn, but you can still make it work with some judicious use of stamina potions.

I also love the Cragheart. Kind of tricky sometimes as you’re a bit of a jack of all trades with middling initiative, but so versatile. Plus reshaping the battlefield is so fun and powerful.

I tried out the digital version last night (thanks, Epic). It works well and Gloomhaven is still a great game! I have a feeling I’m going to be playing it for a while…

I figured I’d spin up a party of the four that haven’t seen any action on our table: brute, mindthief, rogue, and tinkerer. I don’t regret it at all but it takes quite a lot to play four-handed! My wife and I are working through Forgotten Circles two-handed, on the table, and so far it seems that it takes roughly the same amount of time and energy to play four-handed, solo, digitally, as two-handed, with two players, on the table.

Also, I figure now I’ll figure out how good at this game I really am, since I’ll follow all the rules. (I don’t cheat intentionally, of course, but I figure that the unintentional rule-skipping probably falls in player favor, because that’s how brains work.)

I will admit to doing “restart round” a couple times in the first scenario to revert some mis-clicks. AFAICT the monster action (and attack?) draws are the same when you do that, i.e. you get the same “random numbers”. I kind of wish it didn’t do it that way, but oh well. What I really wish is that there were a more fleshed-out undo system.

With that caveat, I did manage to beat the first two scenarios on the first go!

Well this is wacky. Apparently Childres announced today at PAX Unplugged that they will be Kickstarting a Gloomhaven TTRPG next spring, using the same card-based combat system? But also using a gamemaster. It’ll be ‘fully compatible with the two previous games’ whatever that means.

I guess I’m interested in whatever this will be, but only from a distance, somewhat academically- hell, I didn’t even back Frosthaven. My stance on these things has always been that these days I want TTRPGS to be about something other than combat, and I’ll take these campaign adventure boardgames for that sort of thing. I think the mechanics of the *Haven games are brilliant, but they don’t make me want to play them as a more free-form thing. 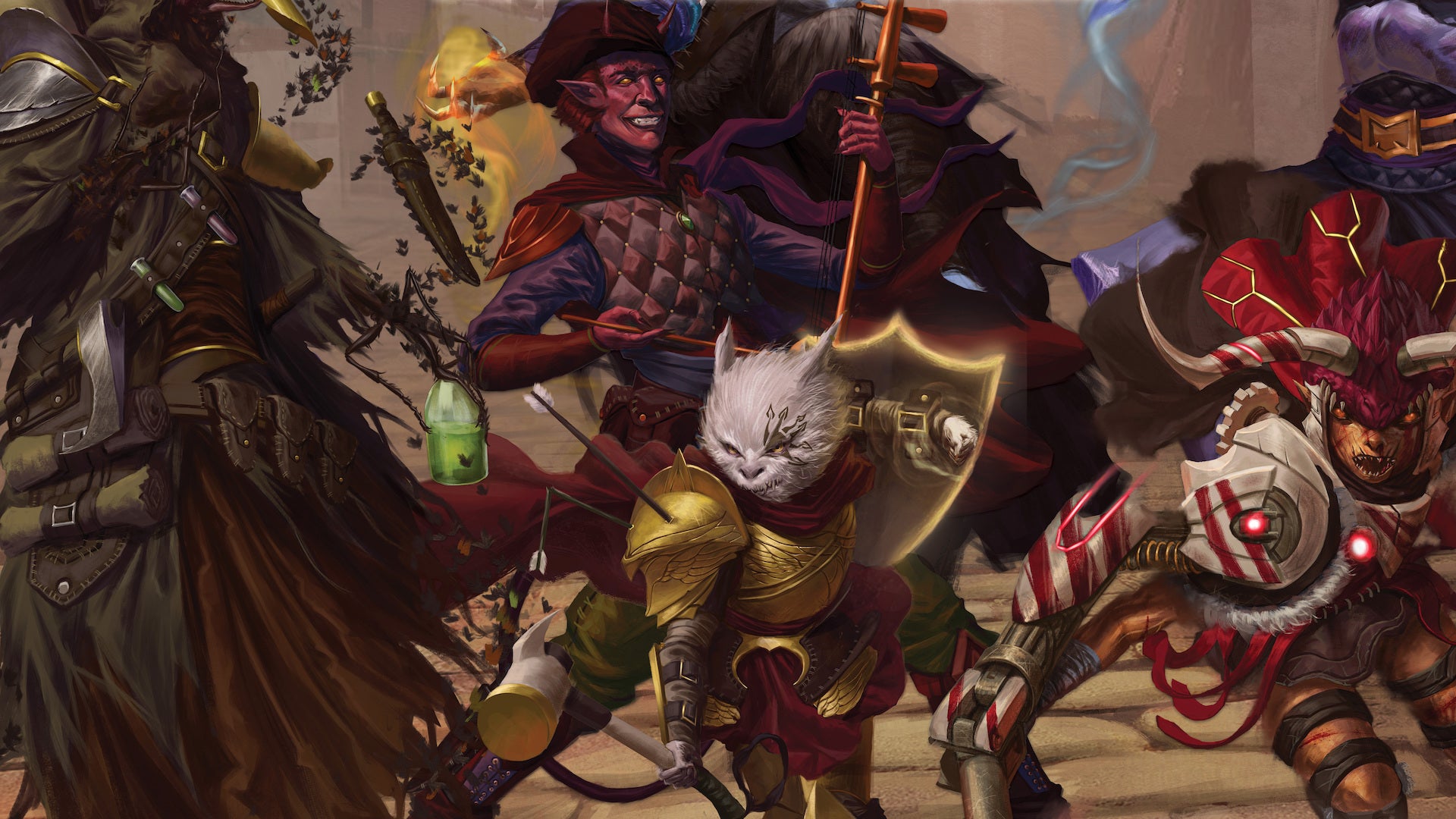 Gloomhaven announces a tabletop RPG that will adapt the board game’s...

Gloomhaven's newly announced RPG will add a new layer to the board game's signature card-based combat.

Apparently Childres announced today at PAX Unplugged that they will be Kickstarting a Gloomhaven TTRPG next spring, using the same card-based combat system? But also using a gamemaster. It’ll be ‘fully compatible with the two previous games’ whatever that means.

The RPG got a lot of attention but some Frosthaven backers are fuming that they still await shipping notices while the game is on sale at the con.

Cons are a time-limited important business opportunity that don’t care about where in your fulfillment your Kickstarter is, so it makes perfect sense to me that if you have some copies earmarked for that con you’d sell them even if not every backer has received theirs yet. And some folks absolutely have, but it also had tens of thousands of backers and the fulfillment companies only have so many people to pack and ship.

What I regard as pretty uncool is games ending up at (non-backer) retail before backers have finished getting theirs. Because that is an ongoing contract.

Byt not worth a new thread.

I got my copy of Aeons Trespass: Odyssey yesterday.

Anyone heard of it?

I be was in the crowd for the rpg announcement. Polite applause but a lot of “welp I ain’t ever gonna play that!”

I got my copy of Aeons Trespass: Odyssey yesterday.

Anyone heard of it?

Saw the KS, ultimately passed on it. Kinds struck me as the next evolution of the Kingdom Death: Monster sort of thing. Seems like it was really late, too? Though I guess not nearly as late as the second KD:M KS, heh.

So, now that it’s here, still look cool? Though I guess this is more a question for the boardgaming thread.

Picked this up for free from Epic. Got wrecked twice in the first dungeon. Was about to uninstall when I figured out that you keep loot and XP even if you fail. That’s very different. I think it took me 6 tries during which one of my toons hit level 2, but I finally won.

That first scenario isn’t representative of the rest of the game. Even ignoring that it’s way too easy to not grok the decision-making around burning cards the first time through(and therefore exhaust way early), I think it’s just a poorly balanced scenario for level 1 characters without items.

I’ve been part of a weekly online Gloomhaven session for the last year now and I’d say we probably beat about 80% of scenarios on the first try. And for the ones we fail I don’t think we’ve ever failed them twice. Once you know the game it’s pretty easy to diagnose where you went wrong and to adjust the approach next time through. Also, you pretty quickly have a half dozen or so scenarios to choose from at any time, so you can always just try a different one.