You’re just talking about the option to reload the entire round.

Yeah, I was referring to option to restart the round in the menu when you hit ESC. I wish it was more granular though because when I’m juggling multiple characters, sometimes I just goof and accidentally do a top action with one card when I needed to do it with the other and that sort of thing.

Finally hit a mission that, in my opinion, just plain sucked. In every way.

Slave Pens. So the story has it that out in the Dagger Forest, you need an Orchid guide and stumble onto the fact the Orchid village has been enslaved, so you follow the tracks to the slave pen and free Redthorn, who will be willing to help, but needs revenge first.

So the game throws you into the dungeon and tells you that you need to kill all the monsters, and protect Orchid. Okay, although difficult. He’s pretty fast – three tiles per turn and and he’ll open doors and run into traps and otherwise get himself into serious trouble. He has ranged attack, though, so that ought to help keep him out of harm’s way.

Except that it turns out that all his cards are just move cards. Why would the game specify an attack value, if he NEVER attacks? And, more to the point, why is he there if he isn’t attacking? I mean, the whole premise is that he wants revenge. So to get even, he runs around trying to get killed, never touching the slavers.

But it gets worse. He always draws a move 3 card, but sometimes he moves and sometimes he doesn’t. No idea why. First time, I figured that he was blocked from moving three, so maybe it’s 3 or nothing. But that was not the case. Some turns he just stalled out – which ended up making a very difficult looking mission trivial to win. And to salt the wounds, he also broke the AI movement rules, at times, heading two tiles forward towards the door and then just heading off a tile laterally, so that he remained the same distance from the door.

I pulled out my old tabletop materials and looked up the mission (I never got nearly this far in tabletop) and Redthorn’s lack of fighting is the same in tabletop directions. But the rest of the issues are digital-only.

I really, really hope that this is just a one off, and that the other missions in the second half of the game are back to the high quality of all the early missions.

I didn’t read your spoiler text, @FinnegansFather , as I’m a newb and I don’t want spoilers. :) But I hope it was a one-off, whatever it was.

The side quest I just did, involving a doll, was about as close as it could be. I won with 1 remaining character with 1 hit point left, at the exit tile, with maybe 3 cards left – enough for one last small rest.

I wish I’d paid attention to how many rounds it went. This stamina calculator implies that my game may have gone more than 20 rounds, but I thought it was more like 17? I didn’t burn any cards at all, and my Brute took maybe 5 short rests and one long rest.

Anyway, I thought it was a really well-designed scenario. Tense and fun. I’m stll amazed I won.

Then again, maybe I could have won it on a higher difficulty than the default difficulty assigned by the game. (I think by default the game put me on the digital game’s second-easiest setting? What difficulty would that be in the boardgame?) The monsters did have somewhat low HP counts, and in many cases I overkilled them, and I assume higher difficulties add monster HPs. Still, the down-to-the-wire outcome suggests I’m not ready to increase the difficulty level yet, if ever.

I believe that difficulty setting is the standard boardgame difficulty…

@Spock Sounds like a great one! I hope to run across it. I think I’ve only seen a couple of the side quests.

Glad to hear that might be the standard boardgame difficulty! That makes me feel better, heh.

@FinnegansFather I’m not sure what possessed me to do a side quest. The rewards weren’t spectacular: maybe 4 XP each and a bit of gold? But it sure was fun. It had a good variety of enemies and one nice little surprise. I don’t think I’ll ever forget those desperate final turns; it was so tense!

Even so, I’m going to return to the main quest next. I hope the coming patch doesn’t make me want to restart!

I hope the coming patch doesn’t make me want to restart!

Ah, Restarting, my incurable chronic disease. Games come and go, but this affliction always seems to plague me. :)

Finally hit a mission that, in my opinion, just plain sucked. In every way.

Yeah, that mission sucks. NPC escort always sucks in all games. There are a few of them in Gloomhaven and they all suck. This one more than most of the others though due to the move 3.

He always draws a move 3 card, but sometimes he moves and sometimes he doesn’t. No idea why. First time, I figured that he was blocked from moving three, so maybe it’s 3 or nothing. But that was not the case.

Yeah, it’s not so much drawing a card as just always doing the same thing every turn. The digital implementation represents it as a card though.
To be more precise, the Orchid tries to move towards a specific room (not visible at the start), and will only move if a path can be plotted there (with knowledge of what’s hidden). In practice this means always moving towards the next door. Importantly, monsters are treated as obstacles for this purpose, so if all possible paths to the next door are blocked by monsters, the Orchid won’t move at all.
It’s a key part of strategy for this mission to slow the Orchid down as much as possible and never ever ever allow him to open a door.

I believe that difficulty setting is the standard boardgame difficulty…

This makes sense now! Started a weekly multiplayer game of this this week and I put our campaign on Normal wherein we didn’t even get close to beating the first scenario.

However, it probably makes sense that the difficulty for the digital version is geared towards a singleplayer campaign where the player has more information and can much more fully plan a single turn and therefore needs to be harder.

I agree that escort missions in games are usually questionable, although the others I have done in Gloomhaven Forgotten Crypt and Ruinous Rift I liked quite well. In those, the text/story made sense, and both struck me as quite original.

Here, the backstory made no sense, as well as the rules being very murky, just going on what the digital version told you.

Oh well, given the number of great missions, I’ve gotta give them a pass on this one.

Tonight I did a core mission that, for the first time, I managed to win with some margin for error. Even so, with just 2 mobs left to defeat, I declined to run across a 6-tile room to loot a treasure chest because I was worried that the 12-hex round trip would slow me down too much. Do you guys ever make that long a detour to loot something?

I finished the first room in 8 rounds; the second in about 3 rounds; and the third in 2 or 3 more rounds, so a total of about 13 or 14 rounds. If the stamina calculator is to be believed, my Scoundrel can go 20 rounds if he performs short rests at optimal times. My Brute can go 25 rounds. So in theory I’d have had time to loot the chest before taking on the final room. But sheesh, that’s a couple turns of movement each way, which would have brought me to round 18 or so, which seems to be cutting it close. Even after round 12 or 13, the list of cards looks so short!

And there’s no way to forestall the victory screen once you’ve fulfilled the quest objectives, right? I remember that from the board game. I rarely looted any chests in that format either!

Do you guys ever make that long a detour to loot something?

Almost always, but a lot of that comes from the board game where you’d would never go back and replay something to get the chest because it took forever to set up. In the video game (especially once the next patch comes out and tells you where there are unlooted chests) it’s not hard to redo a map and speed run to a chest you didn’t loot if you want to and then just bail out of it.

Edit: Also the party size is a huge factor. With 3 it’s usually fair easy to have someone do it. With 4 someone almost always can.
With 2? That’s going to be extremely hard in a lot of cases.

With larger parties sacrificing someone to do something is often a viable strategy. With a pair, it’s almost never viable.

Yup, this. I always didn’t whatever I could to loot a chest in the boardgame because if I didn’t, I wasn’t going back for it.

I often miss the chests. Rationally, I figure that the contents have so often been underwhelming – stuff like items I would never use and occasionally damage – that it isn’t worth it.

But on an irrational level, I am absurdly goal oriented. I forget character goals, I often neglect to collect gold piles, I am obsessed with meeting the mission objectives. With the result that I have a great success rate on missions, but often lag on the other stuff. Which I am pretty sure is not ideal game strategy. 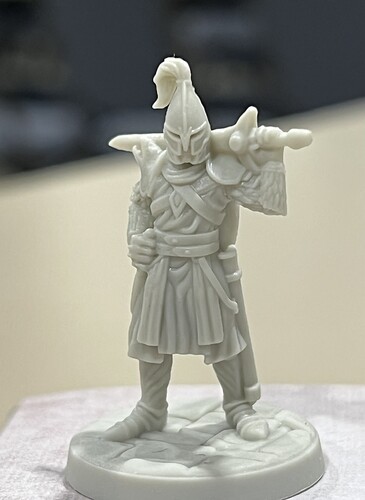 Nope. No fail condition, no penalty for grinding. In Gloomhaven, play long enough and you’ll win. Sort of a buzzkill. Same thing with Darkest Dungeon, actually…

The hard difficulty (added in a later patch) in Darkest Dungeon is essentially a time limit, so you can’t grind forever. Not a very elegant implementation, but I wouldn’t mind something simple like that in this game.

Remind me what the benefit of a failure state would be? I can’t remember.

Seriously. There’s so much investment in playing a single mission (on tabletop, at least) that just losing that stings enough. I see absolutely no need for a campaign failure state after, say, months of playing the game.