I’m sure this probably only interests me, but I just noticed GOG Galaxy now tells you the average play time for the games you own. Here’s a few:

There was a site doing that, although it was taking inputs only from people who actually played the game (no tryouts or idlers). It was quite useful to get an idea if that JRPG was gonna go on forever and if I should quit it already.

It’s crazy how much four kids sharing my Steam library skews my results. I contributed to PvZ and Stardew Valley, for sure, but not THAT much. Logistical is the first one I can say is all me. And then those city builders. And Life Is Strange for work reasons. 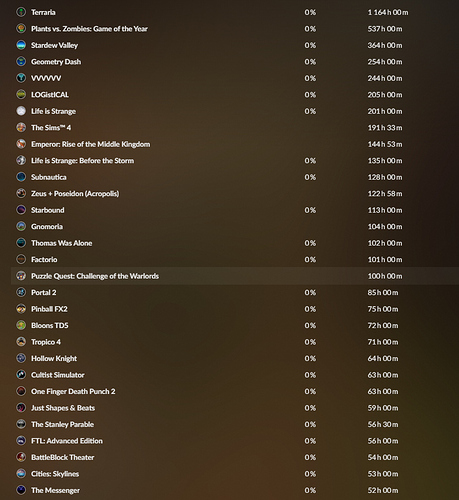 Yeah, be the adult, blame it on the kids.

All kids play these days is Fortnite and Roblox.

But seriously, they’ve got good taste. The only one I don’t get it is 100 hours of Thomas Was Alone. How’d you guys stretch out a 3 hour game that much?

But seriously, they’ve got good taste. The only one I don’t get it is 100 hours of Thomas Was Alone. How’d you guys stretch out a 3 hour game that much?

Fair question. My youngest played it a LOT when he was probably six or so. It was one of the few games that engaged him and didn’t feel super frustrating.

My kids have played some Roblox here and there. And, of course, Minecraft probably outstrips Terraria, if it were counted. They haven’t touched Fortnight, and only talk about it to mock it.

There was a site doing that, although it was taking inputs only from people who actually played the game (no tryouts or idlers). It was quite useful to get an idea if that JRPG was gonna go on forever and if I should quit it already.

Probably https://howlongtobeat.com/, which shows how long it took people to complete a game (average/ completionist).

I’ve occasionally used it when I was determined to knock a few titles off the backlog.

Those are really low play times. It seems like people buy games, but do not put much time into playing them.

Wow, lotta hate in here for what is indisputably the best RPG of all time. Yikes. :-p

Who said what about Baldur’s Gate II: Shadows of Amn???

Is it me, or did the GOG people completely stop tagging updated off-line installers in your game list?

It’d been weeks since I’d seen a new one posted. Then I manually re-downloaded something and realized that it’d been silently updated. This sucks for those of us that prefer to keep an archive copy of installers or who don’t want to use Galaxy.

People have been complaining about it for a while now, but it still hasn’t been fixed.

Thanks for confirming that I’m not crazy (about this at least) :-)

As I recall, there were two versions of HR: the patched version, and the Director’s Cut which had the modified boss fights but almost none of the patches.

Unless they got around to merging the patched and DC versions, I can’t say I am very enthusiastic about this option.

Still no Dungeon Siege 2 expansion. That game was so much better with Broken World installed, I don’t understand why I can’t get hold of a functional copy of it now.

Interesting. Me and my friends played the first Dungeon Siege to death. Eventually we quit after we got to the robots, because my friends are weirdos who can’t stand robots in their fantasy genre, but still, by that point in the game we really were sick of it. I think it took two weeks of constant play to get to that point, which is the equivalent, (for us, at the time) of finishing the Diablo 2 campaign on Normal with 6 different characters. It was just a huge world that kept going forever.

So yeah, when Dungeon Siege 2 came out, we never even looked at it, because it was too soon after that infinitely long Dungeon Siege campaign.

Btw, years later, I started Dungeon Siege in single player once, and found out that the game also had a completely different world for a single player campaign than the one we all played together in multiplayer.

Welp. The blue dots and “updated” games list are back now… But the update list doesn’t seem to accurately track actual, you know, UPDATES. Just seems to show random collections of things that may or may not have changed for me.

Not one, not two, nor three but seven new classic additions to the GOG catalogue today. Primarily bringing Retroism titles, like Fleet Defender: The F-14 Tomcat Simulation, that were on Steam to GOG finally.