Nice! I played Daemonsgate when it first came out, still have the retail box with the 3.5" disks and 15-minute video intro on VHS TAPE (LOL!). It wasn’t a bad RPG for the time, but I remember getting to a point where there was a game-breaking bug and not being able to progress any further. The bug was such that you had to edit the save game files with a hex editor just to finish the game. It also had the old school “look up this page/paragraph/line/word in the manual” copy protection, not just at the start, but randomly throughout the game. I hope GOG removed that!

Ohhhhhh, I meant to try Outwars back in the day…

Outwars Wikipedia entry Brian, I think you’d love it! Or at least like it.

OMG Insta-bought. If it works fine on Win10, hell, I’d have easily paid $20 for it. I didn’t think it was possible that it would come to GOG, as I thought it had been forgotten about even when it was new. Literally nobody I know has even heard of it. Well, possibly a few people here, but certainly nobody I know in real life.

I paid full price for it at Software Etc. back in 1998 based entirely on the box cover info. It was a risk for me at the time, but I was determined to play something hat very night, and it was the only thing in the store that looked interesting to me (that I didn’t already own), and sometimes I used to enjoy taking these kinds of risks, and play an unknown game for an evening, even if it’s bad. Not so much these days, but back then, computer gaming was exciting, and innovative games and ideas were flowing freely. The late 90’s was for me The Golden Age. I bought my first PC in 1993, and gaming for the next 10 years was sort of like discovering the holy land. It was truly wonderful.

And Outwars was certainly part of that wonder. I was in love with that game. When I bought it, I had hopes that it would be good enough that it would occupy my entire evening; the entire weekend if I was lucky. Instead, I played it for hours every night for weeks, sometimes re-playing entire levels just because I enjoyed it so much.

Would it hold up for a new player? Very possibly not, simply because its mechanics have been done as well or better in the decades since. Also, I only ever played the single player campaign, and never finished the game because it got quite difficult at the end, but it didn’t matter because I immediately just started the game over because I simply wanted to experience it again. I never even tried the multiplayer, but back in the day, the few people I talked to online about the game loved the multiplayer aspect and didn’t even try the SP. However, the following concerns my experiences with the SP campaign only.

Things I enjoyed most about it include:

The following occurs at the very beginning of the game, but I’ll spoiler-tag it because it was part of why I loved the game, and coming upon it was exciting for me at the time:

The first mission is a training mission on an island, where you learn all the controls, etc. Seemingly midway through it, a call comes over the radio that your island is under attack, and that all of you trainees must get to a ship and escape. It comes as a total surprise, and you must use your newly acquired skills to fight your way off of the island. And while it seems like your training has been interrupted, in actual fact you have already completed the training. I’m sure this gimmick must have been used in games since then, but at the time I thought it was very cool.

I’m sure a lot of my praise is colored by nostalgia, so keep that in mind. But if you can get into it with the similar mindset of discovery that I had when I first discovered this, you should have a great time. I have Tuesday off, so I’m hoping to download it and see if it holds up after all these years. I can’t wait. This game is easily in my Top 10 favorite games of all time, and I’m so very stoked (and shocked) that GOG has it now!

One more thing I forgot to mention about Outwars: In addition to your jet pack, you also have a glider wing, so that once you achieve a height you want, you can then sail down gradually to all kinds of different places, by using the jet pack for height, and the glider wing for…uh, gliding!

If it sounds complicated, it’s not; just the RMB for the jet pack bursts. Once to get to the height you want, shut off the jet pack and the sailing begins automatically; all you have to do is steer, but you will gradually lose height of course, but by then the jet pack will have recharged somewhat. Getting around quickly becomes second nature, and it’s a blast!

Also, you can switch between first and third person in this game, just by hitting a key. I mostly used first-person view, but occasionally switched to third person for some of the pinpoint landings that were necessary.

Also, the box art, front and back: 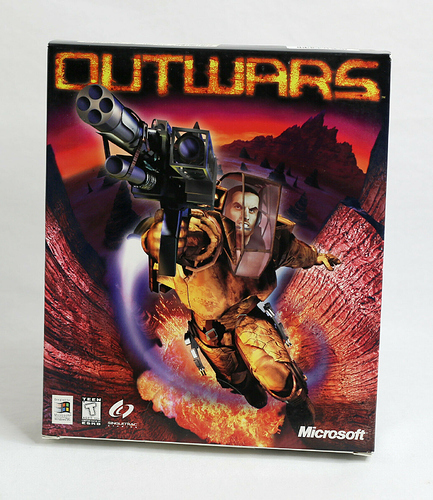 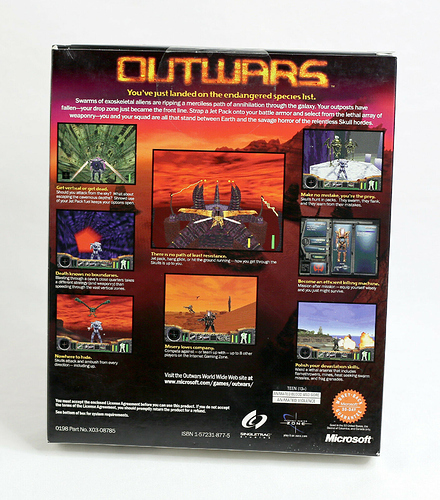 I grabbed those images from a current eBay auction for an unopened copy of the game. The $350 price tag kinda surprised me.
Don’t even think about paying that much for a physical copy. IIRC, the box is Microsoft’s usual game box from that era, in that they rarely contained anything but the game and a warranty card. I could look at my own copy to see what’s in there, but it’s in a closet at the moment.

Oh man, crazy, I was just thinking about The Immortal a day or two ago. I had no idea it even ever came out for PC let alone was just released on GOG. I wonder if this version has the apparently gory death animations of the Genesis version.

I also grabbed Daemonsgate, which is not supposed to be good, but over which I salivated in younger days.

Oh man, crazy, I was just thinking about The Immortal a day or two ago. I had no idea it even ever came out for PC let alone was just released on GOG.

As part of the GOG Harvest Sale you can nab yourself a free copy of Serious Sam: The First Encounter with the next 48 hours. Not something I owned yet on GOG, so I’ll gladly accept and appreciate getting a free copy on GOG.

The Harvest Sale brings the juiciest deals up to 91% off!

The Harvest Sale brings the juiciest deals up to 91% off!

GOG gets CONTROL!
https://www.gog.com/game/control_ultimate_edition
20% off until Sept. 15.

And in news a few days old, they also have KINGDOMS OF AMALUR RE-RECKONING!
https://www.gog.com/game/kingdoms_of_amalur_rereckoning_fate_edition
10% off until Sept. 22.

Proof that there are still some long lost games for GOG to dig up. Machiavelli: The Prince (I think also known as Merchant Prince?) was just released.

I remember really liking this game, and playing a little multiplayer with friends. Besides building trade routes and whacking rival city-states, a highlight is bribing cardinals and taking over the papacy to excommunicate your enemies.

It was. It was originally published by QQP under that name. Back in the day I bought everything QQP put out including this one. Sure wish GOG would get some QQP games (Lost Admiral, Grandest Fleet, Perfect General, Conquered Kingdoms would do for starters).

BTW, GOG and Larian confirmed today on Twitter that Baldur’s Gate 3 will be available in Early Access on GOG too, on the official date - September 30. Great news for people like me who prefer to buy things on GOG.

Here’s hoping GOG gets all the post-release DLC!

Divinity: Original Sin 2 on GOG was always on par with Steam. Some updates would get a few hours late there, but generally speaking, it was supported well on GOG, unlike numerous other games. So I have no reason to think BG3 will be any different.

Divinity: Original Sin 2 on GOG was always on par with Steam.

Except for Switch cloud sync and multiplayer - not DLC admittedly!

Divinity: Original Sin 2 on GOG was always on par with Steam.

I didn’t know that. The first Divinity: Original Sin was the main reason I stopped buying new games on GoG. I had chosen the GoG version on Kickstarter, and the Steam version got not one but two patches right away, and the GoG version still had none, and I put the game away and haven’t been back since, and I never chose the GoG version for a kickstarter reward again either.

To add insult to injury, all of Larian’s stuff is DRM-free on Steam! Womp womp!

GOG tends to be better these days about getting updates.

Odd this is leaving, since the game will remain up on other stores.

It’s been a while since the GOG.com team announced an upcoming delisting but it looks like the streak is over. Crashlands, the self-professed “story-driven, crafting ARPG in an outlandi…