I just saw the news, and it makes me so very, very sad. It’s not unexpected, of course. He was very up front about his illness. But now the day has come.

I’ve only seen Gord perform live once, but he was a dynamic lead singer, and it was almost trippy to watch him do stream of consciousness lyrics appended to classic Hip songs.

I doubt many non-Canadians are going to take this news to heart, but Gord and The Hip were the music of my twenties. Dammit.

Obviously it’s not a surprise as we’ve known about the brain cancer for some time but still sad.

53 is pretty darn young. Seems like we’ve lost someone who still had a hell of a lot more to give. It was always fun to go down to the US and catch The Hip playing in small intimate venues.

Was a big fan in the late 90’s and early 2000’s, saw them live a bunch of times including floor tickets at the Edmonton hockey colliseum. Great person and great music.

Rest in Peace Gord, you made my life a little better.

The lead guitarist of The Hip was my roommate in University. Before Paul Langlois dropped out to join the Hip; he learned guitar on an acoustic in 1983/84, the year Paul and I roomed together at Carleton University. Yes, he sucked as he plucked out Cat Steven’s Father and Son for five long months. Until he didn’t. As you might imagine, I followed The Hip rather closely over the years as a result.

13 years later, he was packing in 60,000 people at Another Roadside Attraction - the Hip’s summer stadium tour in Canada. And I was paying, gladly, to stand in front of the stage and cheer my heart out for the band.

Canada’s affair with the The Tragically Hip is kind of hard to explain to Americans, but here’s the deal: there have obviously been big bands (and singers) to emerge from Canada. Rush is the most obvious one. In the late 90s Our Lady Peace was also huge for a time (no staying power though). Drake and Bieber are massive acts today. There are dozens of other well known mid-size and smaller acts, too, to emerge from Canada. The thing is, in every case, the success of those bands was defined by their success (or failure) in the USA.

But The Hip did something that no other wildly successful Canadian band did: it failed in the USA. A few moderately successful songs here and there in America to be sure, but for the most part - the Tragically Hip were ignored south of the border.

Not so in Canada. In Canada, the Tragically Hip were a massive act. Drawing 60,000 people in summer music festivals routinely at their height in the mid-90s. Selling out stadiums, routinely until the very end. To the minds of most Canadian music fans, the Hip would still be behind Nirvana - but a little ahead of other classic 90s Alt bands. More important than Soundgarden and Pearl Jam, say. Yes, really; that BIG.

The Hip seem to take failure in the USA in stride by the late 90s and accepted that success there would never happen for them. Fact is, they were more than successful enough in Canada to be wealthy musicians. Throughout their recording career, Gord Downie worked in cultural references to Canada in his lyrics. Yes, plenty of hockey references here and there to be sure. But many more references to small towns in Ontario and the Western provinces, too. By 1998, The Hip became a distinctly Canadian act; adored in their home country and treated as superstars and a National Treasure there, even while success eluded them abroad. The fact is, this failure made us love them even more. This way you see, they became ours in a way that no other band ever has – and probably never will again.

The Tragically Hip have appeared on our stamps FFS. Gord Downie’s profile in their final tour was worked into the Canadian flag by the media, just as the band’s name had been before that. They became a patriotic symbol; a part of Canada’s national identity. Trust me, we’re pretty self-conscious about that, living next to the world’s pop culture giant. 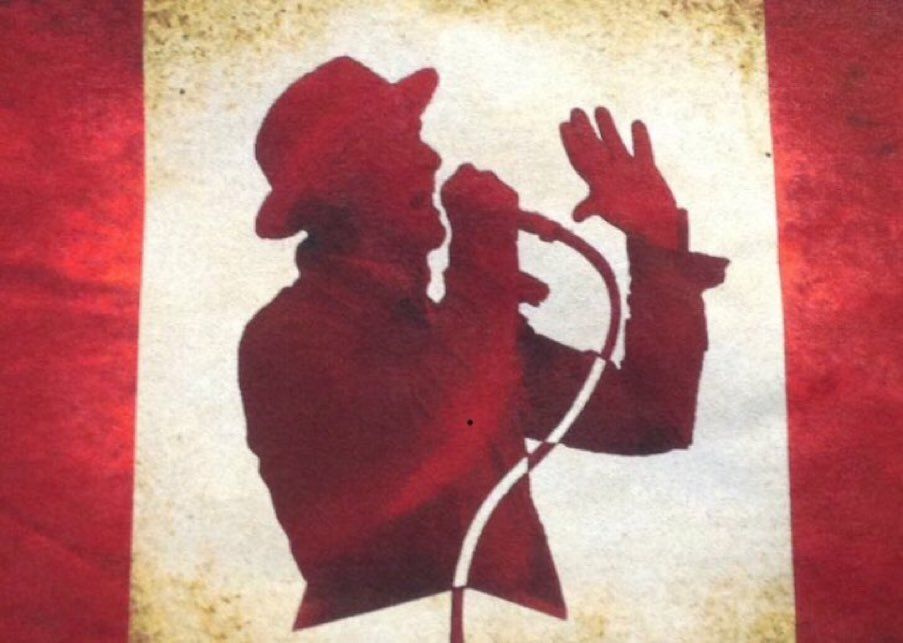 Rush and Céline Dion are many things - but they aren’t that. That legendary iconic status was reserved for The Hip and Gord Downie.

Canada’s flag was at half-mast on Parliament Hill tonight. I am not even sure if this has been done for a civilian before who died of an illness. It certainly is being treated as the most important death of a public figure in Canada since Pierre Trudeau died.

They were ours. And now their voice is gone.

Beautifully said, @Steel_Wind. You’ve nailed it. The Tragically Hip, led by Gord, are a Canadian icon. He will be remembered forever.

Interestingly, I spent a year living in residence at Carleton in 1991, the year I was a Parliamentary Page, and I tried to learn how to play acoustic guitar there, too. Unlike Paul, I utterly failed. I suddenly feel pangs of remorse for my roommate, though!

This celebrity death has hit me the hardest of any of them, by far. I only lived in Canada for a few years, but The Hip are like the soundtrack of my (very fond) memories of my time there.