Cliffski’s new game is coming out before the end of this year! I enjoyed the first one and even bought all DLC for it. So I guess I could be considered a fan. :)

FIRST VIDEO (Pre-Alpha) Cliff is soft talker, so raise up your volume.

Gratuitous Space Battles 2 is the sequel to GSB 1, developed by Positech games. it is currently in development and targeted for an initial release in late 2014 on the PC/OSX/Linux platforms. The sequel will hold true to the basic theme of the original game, but will have a complete engine re-write, and a vast range of cool new features yet to be announced. We can definitely confirm that the new game will have achievements, multiple-monitor support, and mod support. Also a decent website, eventually :D

GSB2 will be available on PC, MAc or Linux, but is not being targeted at IOS or other tablets, as first and foremost, this is a desktop experience ideal for people with gratuitously big monitors. The game is designed to support 5120 resolutions stretched over multiple monitors, regardless of video card. Our aim is for the game to scale down nicely to older PCs, but provide a suitable experience for PC enthusiasts with insane setups!

GSB2 will retain the same hands-off gameplay of the original title, with players designing fleets of ships to battle it out against vast alien fleets. The game will support the same challenge-based asynchronous online combat of the original. Like GSB1, the new game will be a 2D experience, but with a substantially improved engine that gives a much-more 3D and immersive feel.

The conflicts in Gratuitous Space Battles 2 are certainly deserving of the adjective applied in the game’s title but the new video below brings several other descriptives to mind. ‘Colourful’, ‘cunning’, ‘extravagant’, ‘fabulous’ and more besides....

As long as I can still field missile battlecruisers I’ll be happy.

Every time I see GSB2 mentioned, it makes me want to go fritter away the whole evening throwing spaceships at other spaceships.

When I buy a new tablet or a new laptop, one of the first things I download is GSB, it just relaxing having a battle and watching it develop.

this is a early alpha, so I will not comment yet

If it is JUST a prettier version of the original it’ll be a day one purchase for me. Space battles were the reason I watched science fiction as a kid. And then it was turned into a game where I could watch all the space battles I wanted!!!

I thought the original was kind of easy, but a few of the scenarios were challenging, like the one(s) where you could only use frigates (right? the medium sized ships) or the ones where you couldn’t use any or very many fighters for whatever reasons. But really… I just like watching things blow up.

But really… I just like watching things blow up.

The gaming world needs more people like you :D

Amen to that, lol. By the way, very nice artwork.

I’m excited by GSB 2! I would be even more excited if there was a campaign mode and a story but I guess I am a dying breed of gamer. Now everyone just wants contextless multiplayer battles.

I’m excited by GSB 2! I would be even more excited if there was a campaign mode
and a story but I guess I am a dying breed of gamer. Now everyone just wants contextless multiplayer battles.

I’d love a campaign also. I’d prefer some sort of context for the battles.

Day 1 baby. looking forward to it!

I’m excited by GSB 2! I would be even more excited if there was a campaign mode and a story but I guess I am a dying breed of gamer. Now everyone just wants contextless multiplayer battles.

Yeah, I’m also a member of that dying breed.
Some sort of campaign and, even more importantly, some sort of reasonable progression “tree” mission from GSB1 are the reasons I’m not really excited for the game at all.
Start off with only VERY basic components and then offer up enough pre-designed missions to unlock more and more stuff regularly (without grinding!) and tie them together into a campaign structure. Telling a story is optional, but since static text screens between battles would suffice, I’d say why the heck not?
Also, more clearly distinguish between components. In vanilly GSB, it was all a mess of stuff.

I’d love to add: allow me to give commands during battle, but I understand this goes against the MP-focused game design. Which is kinda sad for someone not interested in that mode, but tough luck.

We released the ‘teaser’ trailer today, complete with movie-trailer-voice dude…

One of the things I’m most looking forward to in part 2 is an update to the Fleet HQ UI (purchasable/unlockable module/component screen for those who can’t remember which screen that is). Are there any plans to refine that particular area? In fact, although I only had a couple small issues with the first game, they mostly had to do with UI elements. The Strategic Analysis screen was another sticking point for me, since I could never figure out a way to quickly and efficiently derive useful information from all the pie charts and such provided there, in order to help plan future upgrades or build changes. Basically, I didn’t understand exactly what I was looking at beyond the fact that some weapons might have been deflected more often than they hit their target, but if I remember correctly I couldn’t ever figure out a good way to compare hard numbers without being forced to take a guess at some rough percentages represented by individual segments in the pie charts, and then try to go back to the Build Ship screen and start trying to crunch numbers by hand.

Although I’m sure you have a lot of big ideas being worked into the sequel, my hope is that among these ideas are a few new UI upgrades/overhauls in key areas.

Also, in an older video about the sequel you mentioned that some of the brighter/more colorful ship skins were temporary, but I notice they’re still around in this preview (or similar-enough-looking to trick me into thinking they’re the same ones). Is the preview you posted this morning still showing some of the temporary skins, or will these be in-game?

The thing I would want most would be depth to the battles… maybe not necessarily 3d per se (being tons of extra work/consideration), but maybe three layers of depth that your 2d sprite ships could sit on and blast away at each other from. Or something. Maybe fighters could bounce between layers, I dunno. Actually it might be really hard to implement. But, yes, depth… it’s spaaaace!!

If you watch some of the other vids you will see that there is a lot of depth now, although it’s kinda faked. Basically you position, and the game fights a 2D battle, but the engine renders it in a sort of fake 3D with tons of parallax, so it distributes ships over the Z-depth and makes it look much less flat.

As for ‘temporary skins’, did you see the video on ship design? if not looky here: 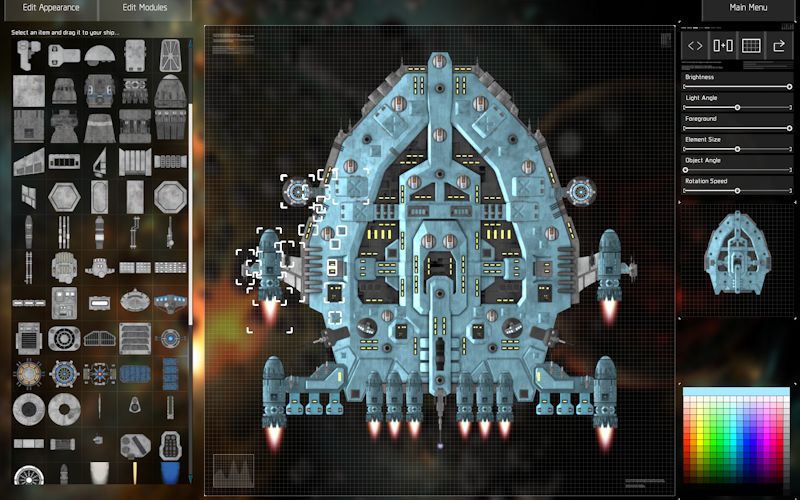 Basically the ships are now visually designed by the player (building on basic hulls). So I was just messing around with color schemes for laughs, but you can have as subdued or serious or dark a fleet as you like, with any manner of rotating spinny glowy pointy bits/fins/podules/engines. Think of it as spore for spaceships, but with a lot, lot more in the way of parts you can add.

Regarding the post-battle stats and shop, yup, they need to be completely revamped. The stats screen did get better as the game developed, but it still needs a rethink, and I’ll be re-doing that at some point too. Plus GSB2 will have steam achievements in it, so I have to integrate that with the honor / unlocks system too…

Hi Cliff. I’ve tried GTB and the first GSB and the main complaint I have is the lack of feedback as to why I’m having success or failure. I think this was improved somewhat with GTB, but it was still a problem. I’m not sure a stats screen displayed after the battle can entirely fix the problem. Are you taking any more steps to provide immediate feedback while the game is being played?

Hi, this is indeed the eternal problem. I find that this sort of stuff is very difficult to design. I know it myself from playing company of heroes 2, where they have all these end-battle stats, but generally I rely on watching how my units perform as it happens to tell. I did add a few extra features to GSB2 as it went on to improve that. For example when you highlight a ship, you can select each weapon and it will show you mid-battle stats for how effective it is.
I also changed GSB1 to have a popup that said ‘your most effective ship design was X, your most damage-dealing weapon was Y’ etc, and I think I need a lot more of that, with the game crunching the numbers for you a lot more, and then explicitly saying “we think you wasted your money on beam lasers dude” or whatever…
Of course, easier said than done!