You can use as many weapons as you have slots open. Just make sure to level them up.

There’s a boss at level 10 with a 3 minute timer. If you fail you repeat level 8, and you keep getting candles for the champion mob therein. I wonder if that’s intended.

They also need to let us see what the nodes on the skill trees do before we actually unlock them.

I am not spending purple stuff yet, so far it seems to come from quests and maybe chests.

I wonder if that’s intended.

It feels very much like it’s intended - not a huge deal to get ten candles per boss-loss loop early on when you need a thousand wax just to unlock one more gear slot, let alone spending wax on upgrades or unlocking more slots.

Part of me wants to agree about needing to see what nodes in the skill tree do, but it’s also fifth or sixth on the list of things I’d currently like to see tooltips for in the place you’d expect them - for example, why do I have to open the character screen and hover over the upgrade button for wisdom to see what my current total mana regen rate is, instead of just being able to hover over the mana orb like you’d expect from the ARPGs the game is inspired by?

I’m all for a good clicker/infinite grind game. I uninstalled this one after beating stage 40 and being sent to the next shard with harder enemies and all progress reset, save for inventory and a multiplier on candles based on total wax farmed on the previous shard. Then I tried to go back to the first shard and all my progress was gone there too.

I hate clickers but love incremental games. Is weird that is the same genre.

Is it me or does spell damage hardly scale at all in this game? At least for the early spells, they seem to become useless pretty quickly compared to weapon damage, even if upgraded. Maybe there are some synergies at higher levels, but I’m not getting much use out of them up to stage 30.

Also, is there a trick to getting ingots or is just a question of opening chests?

Disassemble some weapons and items to get ingots.

I decided to check out the game. I clicked about 100 times or so. 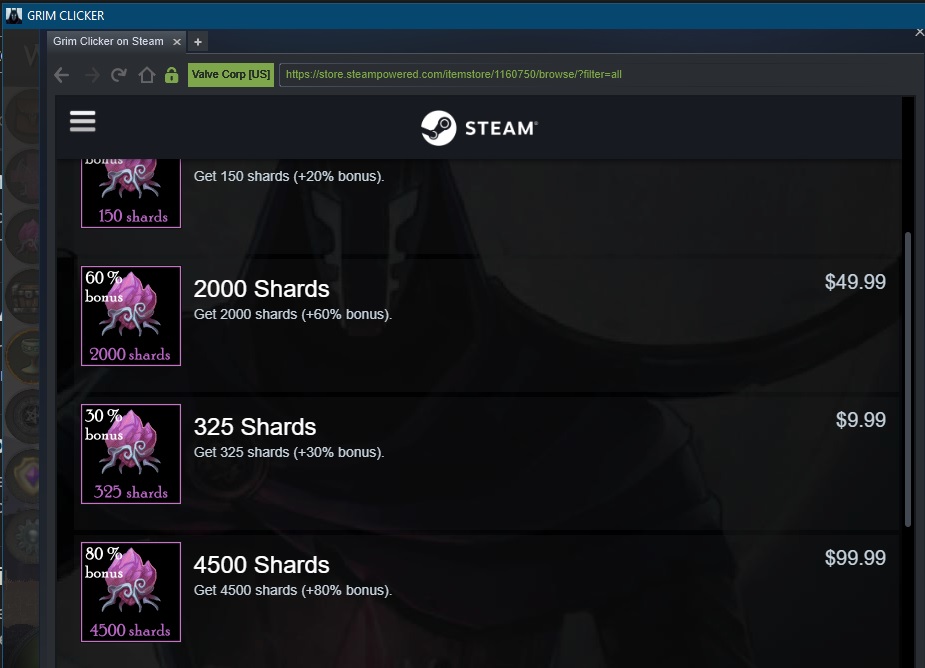 Then I found this and uninstalled.

It’s a free clicker, what do you expect?

expect from the ARPGs the game is inspired by?

It didn’t really boorrow anything else from ARPGs either. LOL.

I think Clicker Heroes 2 does show those things over it’s energy/mana globes. But I wouldn’t consider that a more important tooltip than skill stuff. Or rather, tool tips/etc are all sort of important. But the problem with the skill tree is that you can’t actually plan a build without “exploring” the tree somewhat haphazardly, and then you have to remember what dozens of skills do. This is a much worse issue than any of the others springing from lack of information IMO.

Agreed. If it’s deliberate, I think a better design solution would be to hide the tooltips until you’ve unlocked the skill at least once. That’s basically how Realm Grinder does it, and that’s a game that’s all about hiding iinformation from the player…

You should start an incremental thread. I’ve been sorely tempted to do so as well. I’ve played all of your mentioned games, plus at least 50 other incrementals/clickers. I tend to favor idle incrementals, and mostly dislike clickers.

Agreed. If it’s deliberate, I think a better design solution would be to hide the tooltips until you’ve unlocked the skill at least once. That’s basically how Realm Grinder does it, and that’s a game that’s all about hiding iinformation from the player…

You know I had totally forgotten it did that. Good reference.

@LockerK - dunno if you have done any reading on e.g. Steam forums. But it sounds like going to Shard 2 is a disaster. It’s an EA game so I woujld expect tuning on the numbers but people were estimating(swaging) a month to beat shard 2. Even a couple of weeks would be weird after the day’s progress necessary to beat the first.

If you go back to shard 1, you don’t get quests anymore apparently. I’m not clear if you can get the boss chest progression. But it sounds like there’s not much you can do to increase your power for Shard 2 at that point. Grim Chests I guess, which do drop items you can break down to upgrade other items. But that’s going to be slow going. And while upgrading items via crafting looks useful, it won’t change the fact that you usually need to upgrade them via rubies in a run to trigger them, and with progress starting off so slow. . .

That means one should be very careful about how one spends purple stuff before Shard 2. That’s not necessarily bad game design, but there’s been reported variance on how much purple people had gotten by the time they were done with stage 40 (I’ve seen a spread of 30 or so). And none of that was enough shards to e.g. upgrade damage or anything like that. So, yeah, I expect some tuning to come.

Then I found this and uninstalled.

I sort of think you need to have purchased Clicker Heroes 2 to have the standing to complain about microtransactions in a clicker game. (If you have; great!)

So, what are the good clickers/idlers around that folk can recommend, free, paid or otherwise?

I dont like clickers in general, but this has had me hooked on a few different devices.

Space Plan and Universal Paperclips stand out for having a storyline and most importantly an ending. If you’re put off by the FTP nature of most clickers, try these.

Adventure Capitalist and Egg, Inc. are my favourite examples of the pure “numbers go up” variety of clicker.

Realm Grinder is in the same sort of category as Grim Clicker, ie one where each run you’re creating a “build” which affects your progress in different ways. Unlike this, though, it involves a lot of figuring out secrets (some of which, late in the progression, are bonkers and realistically require the use of external tools, which luckily the amazing community has provided).