Huh. Salvaging loot. I never thought of that. Does it give you the really rare components that you can be short of, like Windigo Spirit thingies and Manitcor eyes? I swear I never have enough Manticor Eyes.

Fire Strike is hilarious you guys

Ok, so I’m thinking I could maybe play a WoW Hunter kind of character, something that attacks at range but has an aggro pet. Is there any way to build that in GD?

Splitting between pets and not-pets is tough to do in GD at higher levels, but the Shaman class has some good ranged attack skills and a quality pet.

Is Shaman a base game class? I haven’t committed to the expansions yet.

You could do a shaman primal strike build as discussed above, and just put some points into the pet…lemme go look at planner.

Something like this would be pretty badass. You’d have a not trivial pet that actually agros pretty well, and you’d still have really strong ranged attack via 2h gun.

Crap now I want to go level this lol.

Apparently so. I just started a new character, briefly, just to see how the game looked. Got overwhelmed as soon as I crossed the bridge and had to be a bit more careful. Think it’s time to start playing again. Once I am done with Dragon Quest XI at least.

Level one is horrid. Literally finding your first weapon and investing in your first skill at level 2 make a 10x difference in your power.

It reminds me of being level 1 in D&D back in the day. Running around with 1hp while only having a magic missile and a dagger to work with. :)

It lasted all of one minute though.

Literally my favorite part of nearly every game. I love that early search (struggle) to upgrade your equipment, and GD was no different. Just thinking of it has me itching to start a new character (but I can’t! too much to do!).

Trying to think about what I want to play. Usually I have a 100 ideas, but since I haven’t played in awhile, nothing is coming to mind. What is the current hot class to play? Not finding much of anything searching. Seems it was Death Knight, but it was nerfed?

Telling you man, this cold-focused Nightblade is 75 and going strong with no particular equipment of note; he’s self-found.

Trying to think about what I want to play. Usually I have a 100 ideas, but since I haven’t played in awhile, nothing is coming to mind. What is the current hot class to play? Not finding much of anything searching. Seems it was Death Knight, but it was nerfed?

I started a druid with using primal strike (which I’ve never used before believe it or not) and the tornado dude. It’s been pretty fun so far but I am only around level 14. Sent you start a shaman you can do that vitality attack that pretty much Insta deletes things until around the end of act one if that is more your style.

Also shaman can have the big old Briarthorn pet if you’re into that.

So here’s another question for ye old Grim Dawn experts.

I have a stash which is literally full of blues and purples … and I don’t mean one tab I mean all the tabs (except the tab that’s full of potions and augments.

90% of it is lower than level 60 stuff, maybe only 10 or so endgame items (since I usually run out of steam before I get to endgame).

I keep the stuff around “just in case” but I maybe use 3 or 4 items total out of there when leveling a character. Is this stuff worth keeping? Is there something I can do with it? Do you keep or ditch items?

You could always check out the Grim Dawn Item Assistant Mod. It lets you export gear into a program thats much easier to sort thru etc. I honestly don’t keep anything except for really good low level things and high level legendaries but I also havent ever tried to farm for a matching set of anything, I imagine it would be easier using a mod like this to collect the sets…

Progress report: I finished all content on Elite with my Lightning Druid, and moved onto Ultimate difficulty.

Unfortunately, after I finished Act 1, I got the bonus quest to go that island for so-and-so’s notes, which is a high level quest I think, I was doing fine until I tried to hit a shrine there. If this had been a hardcore character who had survived thus far, this would have been a pretty painful death. Stupid green shrine. I died for the first time since pre-level 50.

And not just that. I kept going back to retrieve my corpse, and I kept dying over and over. Let me look through the boss database to see if I can spot the fucker who kept killing me.

I think it was this guy: Iceskorn.

Now, keep in mind, this was a green shrine, so he wasn’t alone, he was surrounded by about 4 other bosses, not to mention his own spawns, and all their spawns. I see that he does Olexra’s Flash Freeze, which lowers my Physical Resist by 25%. That does explain why I was taking so much more damage than normal by all the creatures surrounding me, including this guy. And he took FOREVER to finally bring down. I think I died about 5 times, and I only finally brought him down because his damage persisted across my deaths, if you know what I mean.

Hopefully there’s not TOO many monsters like that on Ultimate difficulty.

He was from a green shrine, and it was also the sheer quantity of bosses coming at me at the same time. Maybe if I ignore green shrines for a while and stick to the main quests, I’ll be fine? Like I said, nothing else in the game has given me any trouble since I was low level.

One thing that might help is that I recently found the blueprint in the game for Seal of Might.

By using this thing, I’ll be doing less damage than if I use something else, but at this stage, it’s not about damage, it’s about being able to take hits. Check it out, this thing will give me another 4% physical resistance: 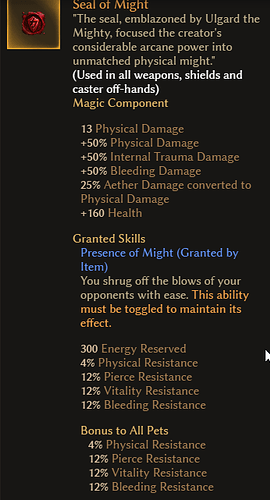 And it’s constantly on, instead of triggering when I get hit. Very cool. I can’t believe I’m still finding so many blueprints in the game. It really is amazing how much they’ve grown the loot in the game with these two major expansion packs.

It’s not even just the expansion packs. They add new items pretty much every patch. Not to mention all the UI work and other additions they’ve done outside of expansions. The loot totems came after the last expansion. They are reworking green loot again in the upcoming patch. I’ve been really happy with how they’ve continued to support this game and would continue to buy any additional DLC content they might if it means they’ll just keep making this thing better.