Barring playing on more “xtreme” levels, I would say just play what feels fun and don’t be afraid to mess around with different combos. There are a lot of solid mods, but I won’t play without an inventory mod of same variety because I’m a hoarder by nature.

The one thing I’ll say is that the best favor you can do is to pick a damage channel and focus on it with skills, devotions, and gear. So that’s “elemental” (really a combo of fire/cold/lightning), fire, cold, lightning, poison/acid, vitality, physical, pierce, or “pet”. Just orient yourself around collecting things that all buff the same thing, and you’ll be okay.

There are a lot of solid mods, but I won’t play without an inventory mod of same variety because I’m a hoarder by nature.

I don’t suppose there is anything I should read to help a new player? Things like great class combos, mods that are essential, tips for going through the content the best way, if I should just slam the accelerator and play Reign of Terror from the get go?

If you loved D2, ROT is amazing.

Reign of Terror is actually the only game you ever need play for the rest of your life because it’s the best thing ever made. Ok…that may be slightly hyperbolic, but I really love this mod. It’s not just D2, it’s a BETTER D2, in every way. So many great quality of life things with this mod.

Thanks for the recommendations mate.

It’s a great mod, but it certainly benefits from knowing D2. I played d2 a ton, so for me it’s both the nostalgia and the game itself. I think it stands on it’s own, but there is no way for me to really know that, as I sunk thousands of hours into D2.

You are perfectly fine to get a handle on GD as it stands, there is a ton of game there to be had, and a great game. Best ARPG ever made in my opinion.

Also, don’t forget to play with a gamepad. It takes a minute or two to setup within the game, and once you get used to it, it’s way more fun than mouse and keyboard.

I’ll reiterate that gamepad is great, but if you want or need precision targeting it doesn’t do that. Some builds suck with it.

@Ultrazen can you play the RoT mod without worrying about GD mechanics at all (assuming I pick one of the D2 classes)? Do I need any other mods to go along with it or just install RoT and dump the files over existing GD installation (or should I use a mod manager)? Are there any conflicts with the item manager that was linked above? How is the difficulty handled? Is there respec? Are the tooltips as helpful as in vanilla or will I have to look up what individual stats do? Are the armor enhancements (components) still in the game?

If you lack Diablo 2 nostalgia, then Grim Dawn is way better.

D2 is pretty dated by comparison. For one it looks weird having all the 3d assets bound to an isometric grid, and sparsely distributed at that. Everything is pretty samey. There’s not a lot of loot variance, early on you’ll find heaps of the same couple of items.

RoT is a side-by-side install, it doesn’t mess up your vanilla installation.

It works wonderfully with the Item Assistant. Wouldn’t play without it.

RoT is still GD mechanics, so you do still have to engage with them to some extent.

I don’t remember how respec works in RoT. It’s cheap but not free in vanilla.

Components are still in the game but they (THANK FUCK) got rid of the concept of “partial components” – everything drops full components now. Yes, that means you have a ton more of them. This is a Good Thing!

Components are still in the game but they (THANK FUCK) got rid of the concept of “partial components” – everything drops full components now. Yes, that means you have a ton more of them. This is a Good Thing!

Yeah I’m aware of that change, it’s in vanilla GD too. Idk, I guess I was just hoping for a more ‘pure’ D2 experience based on @Ultrazen’s hype above

One of the worst-explained mechanics in GD is resistance debuffing, and how various sources of it stack with each other.

This is a beautiful cheat sheet that answers all those questions.

Much love to the GD community. I love this game.

Ooooooh! All the vital information in one small google spreadsheet. That’s beautiful.

Wait, what am I doing? Don’t tempt me back! I already played this for over 1200 hours.

I also wish there were a “classic” mode in Reign of Terror that strips away the other classes, skills, and loot, but it is still an absolutely fantastic mod and I highly recommend you try it. I’m not saying I’ll never install Diablo 2 again, but so far it’s managed to scratch that itch.

And I have zero faith in the powers that be to not fuck up the Diablo 2 remaster that’s in development.

And this is free (as long as you own the wonderful-in-its-own-right Grim Dawn and its expansions).

I only bother casting totems on nasty packs or heroes/bosses. Otherwise Devouring Swarm makes it rain all on its own. This is some speedy murderin’, let me tell you something.

Found this uh around Homestead sometime, and it’s cuckoo bananas. 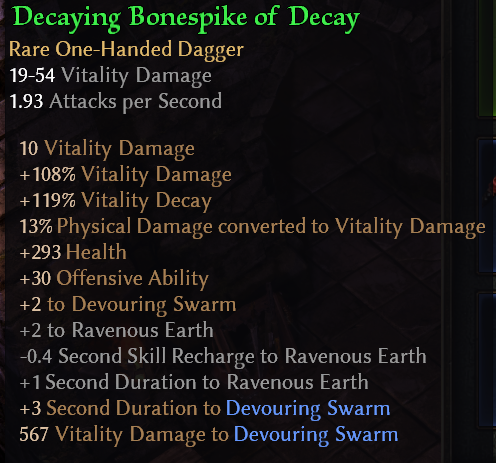 I could go with an offhand of some kind for a nice proc and better damage, but I’m much happier with the tankiness provided by the shield.

Yeah I’m aware of that change, it’s in vanilla GD too. Idk, I guess I was just hoping for a more ‘pure’ D2 experience based on @Ultrazen’s hype above

If you play D2 classes, it’s very well done in terms of converting the D2 skills to the GD system, they are pretty much as you remember them. Runes, words, all that stuff is still there. It’s like playing D2 with GD interface, hard to describe unless you see it in action. I personally think it’s a WAY better version of D2, there are a lot of quality of life changes, and being able to play with a controller is amazing.

The great thing about RoT is you have all of the D2 stuff + all of the GD stuff.

Just being able to combine 2 D2 classes is hundreds of hours of fun, at least it has been for me. Sorc + Palie, Sorc + Druid…or barb. A Frozen Orb sorc, with a bear pet, and a ton of hitpoints. There is just so much fun to be had with that mod.

There’s not a lot of loot variance

Huh? You literally have all of the loot from GD, plus a ton of stuff like sets from D2…There is lots more loot in RoT…

I can’t say how other people will react to ROT, but to me, it’s a far better D2 than D2 ever was. I have thousands of hours into the original D2, and still have it installed on my comp, but it’s very very difficult to go back and play it now that I’m used to all of the great updates in the GD version.

Huh? You literally have all of the loot from GD, plus a ton of stuff like sets from D2…There is lots more loot in RoT…

You missed the other bit of my quote! :)

There’s not a lot of loot variance, early on you’ll find heaps of the same couple of items.

That was just my experience playing the first area and dungeon, where everything was basically the same few items over and over. Admittedly it seems like I extrapolated that to cover the entire game, which was wrong. :)

I am a level 40 Inquisitor. It’s been smooth sailing thus far with word of pain and cleanse getting rid of all trash mobs with great haste, the only negative is poor single target damage.

I have yet to pick a second class, and I am thinking of doing it very soon as I heard that word of pain stops being effective around level 40 as mobs get tougher, so I might want to respec out of it.

I am thinking of making nightblade as my second class and go duel wield melee. Does anyone have recommendations for other combos that might be more fun?

Respeccing devotions, not so much. As they’re generally pretty tied to elements or themes, try to pick something (pets, melee/range, shield/2h/dw, damage channels).

Skills can get huge bonuses from certain items, particularly Monster Infrequents (basically, base item types that are tied to specific groups of monsters. My dagger upthread is an MI). This can go so far as to make something viable/not-viable.

I read that the cost exponentially increases with the number of skill points you’ve respecced on a single character. Is it that gold is so easy to come by it never matters much?

Oh I wondered what these were in the loot filter, thanks!