I think I was in the low 70s last time I completed all the content on Veteran?

You guys are way better at this game then me. I. Struggling to be Conley or whatever his name is on veteran level. I died like 6 times yesterday before giving up.

What is you aether resistance? It’s important with that boss IIRC.

If you’re struggling it might be worth following a build you like. My own builds tend to suck, but some of the builds you find make the game incredibly easy.

Yeah, I probably need to just change some gear out to up my aether resistance. I tend to hate to pre-plan builds and just like to play these types of games with whatever drops my way. Right now I’m basically just focusing on fire and burn damage.

What two classes are you playing?

Nice. I got pretty far with an Elementalist (hardcore) once. I called him “Skyfire Grenado”. For obvious reasons. 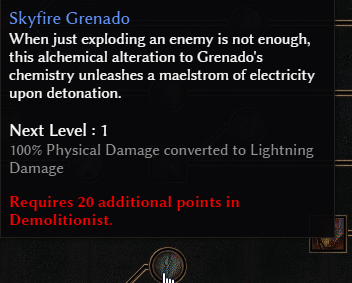 Obviously, that particular character focused on lightning, not fire.

One day I’m going to make a character that either does the Mortar Trap or the Canister Bomb. I’ve still never tried those.

Late last year I tried Blackwater Cocktail for the first time, and it was a total blast. Honestly, the whole Demolistionist arsenal never got enough love from me because so many other classes and skills caught my eye more.

If you want to be more powerful:

ARGH! Just did some long keyed dungeon in Forgotten Gods, beat the end boss, opening up chests and click on this pillar thing which is a teleport back to the beginning. I didn’t pick up whatever item is needed to finish the quest! I figured I would just waste another key and run through the empty dungeon to get it, but nope, can’t open it again this session, so I have to do it all over again.

Edit: Apparently, I am not the only one. There is an achievement for beating the boss, 1.5% have that (Banish the Night). And another achievement for turning in the last quest item you get from said boss (Settled Debt). Only 1.4% of people have that. So .1% are either not bothering to finish the quest, or are missing the item as well. I went back and got it.

GD is latest on my ‘rona playlist. I only made it halfway through the original campaign at launch and now I’ve finished it, the first expansion, and am partway into the second. Great ARPG, very polished, and it has that “just one more area” addictive quality. I fuckin’ love removing fog of war on maps. Just something about it.

Even after many years and two expansions it still has some design problems. The game is terrible at dealing with tight passages and it’s full of those, winding through barricaded buildings and such, which is seriously annoying. Diablo and PoE figured that stuff out from the start, everything is relatively wide-open.

I’m having a grand ol’ time, playing with a 3X experience mod to get that dopamine rush more frequently. Everything scales to your level sufficiently that you don’t outlevel the monsters this way even on a completionist playthrough and it’s a lot more fun. I’m level 75 now, out of a cap of 100, on normal difficulty.

I also used a character editor to max out all the faction rep. It’s a single-player game and I don’t want to grind, don’t judge me!

The game is terrible at dealing with tight passages and it’s full of those, winding through barricaded buildings and such, which is seriously annoying.

I really hate parts of Malmouth because of this. Constantly having to rotate the camera to navigate. I don’t think the rest of the game is too bad in that respect though.

I just finished Malmouth and, yeah, it was awful. I never rotate the camera, I just deal with it.

Walking up stairs is particularly painful, you need to aim the mouse precisely in the right spot or your character keeps circling around like a dofus.

Just click on a spot on the ground in next room. It will path-find its way there easily enough.

Those areas are much better using the controller, since you’re pushing the control stick to move in those tight corridors, not, clicking on areas and hoping your characters move.

Plus using the controller is more fun in general since combat feels better too.

They added controller support pretty late in the life of the game, but they did a great job.

I started a playthrough (now level 50 with my Druid) because of all the talk in this thread. It’s my sixth or seventh game and it is still a lot of fun. I think every summer of mine needs a game like this to satisfy the loot-finding craving.

I wish they’d figure out a different way to manage enemy spawns, though, as it gets tiring when so many mobs are pushing out of the ground as a ‘surprise.’ Has everyone just gotten used to it? I seem to recall it being a bit of a grumble early on but it’s faded away in recent times.

Use a movement ability to reposition. They are generous enough to give you whatever type you’d like.

I really don’t enjoy it when monsters just spawn on top of your ass. It feels cheap. GD has plenty of that.

I wish they’d figure out a different way to manage enemy spawns, though, as it gets tiring when so many mobs are pushing out of the ground as a ‘surprise.’ Has everyone just gotten used to it?

Honestly, I have never thought twice about it. In fact, I am struggling to think when monsters do come up from the ground. Bone crushers do, but you can pretty much tell when they are going to come up by the floor type. From the air you have spiders and harpy’s, but there aren’t a lot of them either. What else does?

Undead. Constantly. It’s a decent DPS check to obliterate the whole pack before they finish their spawn animation ;)