I mean UoC was one revelatory. While the art style of 2 is, IMO, inferior, the stuff I’ve seen of the actual design still looks great.

I am cautiously optimistic on that one, for sure.

I mean UoC was one revelatory. While the art style of 2 is, IMO, inferior

Yeah I loved the bobbleheads. The new look is just vanilla like the Order of Battle series.

All I want is someone to use the German Generalstab symbols… I managed to teach myself to read those things, dammit!

The developers of Strategic Command are on the Single Malt Strategy podcast - it’s a good interview.

Although they go into a lot of detail about how hard it is to make a map/campaign in the editor - it’s making me feel a little disheartened about my project to recreate the War in the Pacific map in SC:WaW.

Thought I’d play through a game of The White Tribe and record it on the forum.

For those of you who missed @Brooski’s post above, The White Tribe is game by R. Ben Madison, published by White Dog Games. It covers Rhodesia from 1966-1980, where the white-led government sought to come to terms with Rhodesia’s black majority, while resisting Soviet and Chinese backed rebel forces. To quote the back of the box copy:

In The White Tribe you are the Prime Minister of the illegal settler state of Rhodesia (today’s Zimbabwe), which broke from Britain in 1965. Your job … is to defeat a guerrilla war—and overcome the obstacles of party politics, tribal resentments, and racial extremism to stitch together a working coalition of population groups that can finally turn Rhodesia into a multi-racial democracy built on compromise. Can you thread the needle in building a new nation that protects the rights of all its people? Or will your new nation be overwhelmed by a Chinese-backed Marxist-Leninist guerrilla terrorist army that seeks to make the genocidal tyrant Robert Mugabe dictator-for-life?

Rhodesia awoke to a shock this morning as Prime Minister Ian Smith, leader of the Rhodesian Front and primary driving force behind Rhodesia’s Unilateral Declaration of Independence, was pronounced dead following an aneurysm. After a period of infighting among the Smith cabinet, dark horse candidate Charles Foster Kane was elevated to Prime Minister. Prime Minister Kane announced that he intends to work towards a multiracial government of Rhodesia, but that he will oppose the Soviet-backed Zimbabwe African People’s Union (ZAPU) and Chinese-backed Zimbabwe African National Union (ZANU). 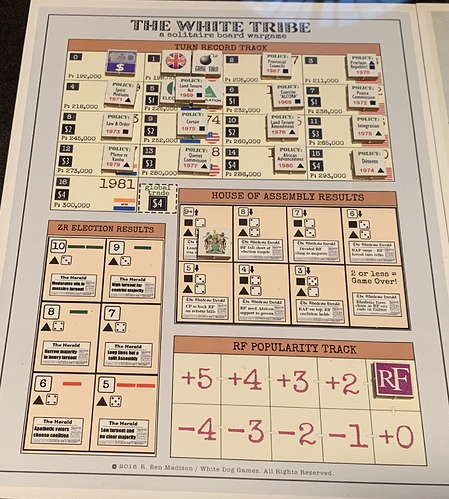 In the last election, the Rhodesian Front, a party representing the interests of the white settler class, won all of the seats in the House of Assembly, guaranteeing their control over the government. As a result, conservative policies will be easy to pass, and liberal policies will be quite difficult.

Polling after Smith’s death shows that the Rhodesian Front is only mildly popular (+1 on the popularity track). However, elections will not be held until 1970 (Turn 5), so there is plenty of time for Prime Minister Kane to improve the government’s popularity—or drive it into the ground. 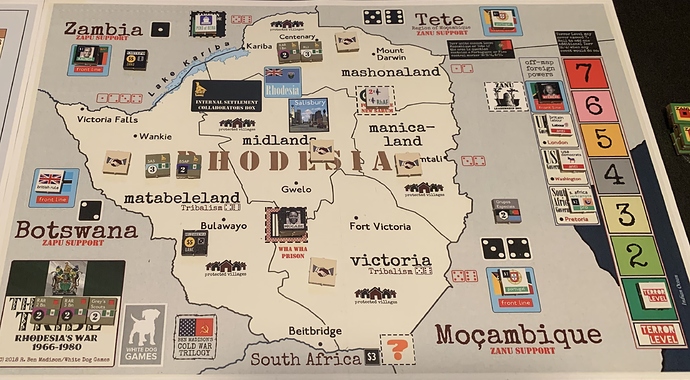 Rhodesia is stable in January 1966, as both ZANU and ZAPU are lacking in resources (Terror Track at 1). Race relations are generally positive (represented by the hand shake icons in each territory).

Rhodesia’s neighbors are also mostly stable. Botswana is under British rule, and will not tolerate ZAPU militants. The Zambian government, led by Prime Minister Kaunda, is generally supportive of Rhodesia, though ZAPU militants are organizing in their territory. Mozambique is currently ruled by Portugal, with a substantial investment in border security (ZANU militants may organize in Mozambique, but may not cross the border into Rhodesia as long as Portugal maintains control). Portugal also provides financial support for Rhodesia ($1 for each Portuguese control marker on the map, so $2 currently).

Rhodesia is not favored on the international scene, however. Both the British Labour Party and the United States Democratic Party oppose the Rhodesian Front. Prime Minister Nyerere in Tanzania likewise opposes Rhodesia’s white government. (None of these countries will provide funds for Rhodesia). Perpetual pariah and apartheid state South Africa supports the Rhodesian government. (South Africa provides $3 per turn, and an additional $2 because the current government supports Rhodesia).

Each turn in The White Tribe has six primary phases:

In order to win, the player must succeed where Ian Smith and the Rhodesian Front failed, and create a viable multiracial state. Points are scored for race relations (handshake markers), RF popularity, Population growth, certain politically sensitive units being deployed, election results, certain policies, and having collaborators. You add a single die roll to the total, and then subtract the number of Terrs in Rhodesia. 23 or more points nets you a victory.

Now that we’ve covered setup, turn one will follow.

I was playing it last night, looking forward to see how your game went.

There is no policy on the first turn. Prime Minister Kane could exercise visionary leadership, but I don’t think that I want to pull any of the policies forward. Upcoming is the proposal for “Provincial Councils,” which would essentially form tribal trust lands into mini-states, pushing 6,000,000 black Africans into half the country’s territory, leaving the remaining half for the less than 300,000 white settlers. I am going to not take action on this policy, which will have some small negative impact on the popularity of the RF. Following that is a vote on the Rhodesian Constitution. I will likely try to pass a liberal constitution, which will require me to hold some snap elections to decrease the power of the RF in the Assembly House, in favor of left wing parties. Too little popularity is dangerous, but we should be able to hold on to enough power to form a government in 1968 and hopefully pass a liberal constitution, making reforms easier going forward. So no action this turn.

On the whole, this turn was probably good for the Rhodesian Front. While the airforce was damaged, and the RF’s propaganda was mostly ineffective, the Tory victory in the UK and substantial population increase gives Rhodesia a strong base to raise funds for future turns.

Thanks! I may not have turn 2 onward until Monday, as tomorrow as very busy. I’m hoping to give people some insight into how the game plays, because I agree with Bruce that it is fantastic.

I never thought I’d ever pick a solo title. Ever.

I don’t play board games these days for various reasons (e.g. no one local to play, time and space to set up a game, etc.) and I usually wargame on my notebook on planes and in hotels on business trips. But this replay has me interested…

It’s really fantastic and worth it, Jeff. A gem.

Great to see this, @CF_Kane! This is a game that deserves a lot of attention. It’s so good!

You can order direct from the publisher, as they print on demand. http://www.whitedoggames.com/thewhitetribe

Sometimes history repeats itself, but rarely this soon. I rolled the same set of random events for 1967 as I did for 1966, but this time some of the results are a bit different.

No elections this turn, as the political situation abroad is relatively quiet. Although pressure for independence from British control in Botswana continues, the British maintain control.

The state of the board at the end of turn two:

Please note that the $ marker is wrong in the photo (I did not record the $3 I spent on Troopies), but I have corrected it before turn 3. The $5 I have remaining is plenty, however, as I should be able to fill up my coffers from international support and population alone, even if sanctions come in. Next turn will be the moment of truth, as we see if Prime Minister Kane can build a coalition in the RF to pass a liberal constitution, or will be forced to settle for a conservative document.

You can order direct from the publisher, as they print on demand. http://www.whitedoggames.com/thewhitetribe

Does anyone besides the publisher even stock this game? I thought that was the problem with print-on-demand – the margins are so thin that it wipes out the wholesaler cut.