I lived in Germany three different times, at three different ages, from an infant to a working adult. Signs that had pictures of tanks on them for weight limits, bridges set up with demolition points, highways with convoys of armored vehicles, all that jazz. In Berlin, my last time over there, I remember one exercise they did where I was walking down the street near a base and in a random parking lot I saw a mortar carrier loosely disguised with junk and trash to look like a dumpster.

Of course, I also ate my lunch sitting outside on a radar-type tower as the East German helos flew by a couple hundred meters away across the wall, with their binocs and sometimes machine guns trained on us. Which was nowhere near as disconcerting as the horrible smells from the men’s room on that base, where the local contractors had installed the pipes from the toilets with zero downslope, so stuff just sat there until the sheer pressure of it pushed it down the pipe. They did fix that, eventually, but man it was stinky for a while.

I was a young soldier in the Fulda Gap (just east of Hanau) just after the fall of the Wall. It was an interesting time.

It’s funny, i actually just bought the old versions of the original CM trilogy from GOG as they were on sale. I essentially bought the first one because I wanted to replay the Chance Encounter scenario from the original demo 20 years ago and then decided, what the heck, why not get all 3? Anyways, after doing a quick bit of modding of the BMPs so that they look a little nicer I started playing the scenario as the US. It was just like I remembered it twenty years ago! I still remember when it came out, it was absolutely light years of anything that had come previous. I advanced on the town fairly rapidly and my Shermans took out the German Stug 3s in rapid succession and then started firing on anything that moved with their MGs. I thought to myself, “This game is a lot easier than i remember it being.” I captured all the victory points except for the one on the left flank in the forested area on the German side. I rushed a couple of rifle squads and an HQ over to the forest and took cover. I thought I would ambush any Germans that happened to move forward. But by that point my Shermans had moved up and were mowing down the fleeing soldiers. So I thought what the heck, I’m just going to rush this point and that will be the game. So i ordered them to advance on the flag and then hit the end turn button. When I watched the playback I saw to my horror the the forest was teeming with German soldiers! My squads fought well but eventually became pinned and then panicked. They had 9 and 15 kills respectively before they bugged out. I received another platoon of reinforcements and immediately rushed them forward in support thinking that I had pretty much bled the enemy dry but still they kept coming! The whole battle was taking place deep in the forest where my tanks couldn’t lend support and grenades were flying everywhere. My troops were even being attacked from the rear by some submachine gun squads which I’m not sure how was even possible considering how I was dominating them up to that point. My reinforcements were totally ground up and eventually it came down to my half strength HQ and depleted rifle squad engaging in CQB with the remnants of a German HQ. We finally came out on top after taking out some remaining Volksgrenadier units but i had come close to losing two platoons in that forest. We had about 50 casualties to the enemy’s 200 but almost all of ours came in those last few moments of the battle. It really brought back to me what amazing games the originals in the series were.

Battlefront are at least more forthcoming with information than Matrix usually are. The scheduled release date is April 2021 and it will release on Steam the same day as Matrix/Battlefront.

I’m still not sure, but I’m two and a half games in (one was interrupted by my having to start cooking on Christmas), and all two and a half of them have been delightful. See the folded battle report (reposted from another forum) below:

And a quick summary GIF:

Nearly everything we use is 3D printed, and the rest is cheap (a pack of 200 coffee stirrers for marking boundaries, string for measuring distances, the occasional book we already have). Lately, I’ve taken to putting Warhammer battle reports on as background noise at work, and there’s some amount of enjoyment to be had tallying up what a 2000-point army costs and realizing it’s more than the 3D printer and all the filament I’ve purchased to date.

Here are the rules we’re playing under. They’re Wells’ originals (everything under the Basic Game heading, at least), along with some as yet untested amplifications later on.

They have even done a video!! The marketing deal with Slitherine is paying off.

Cool. Looks a lot like the CM set in WWII that my brother and I used to play the heck out of via PBEM you go-I go style. Hope it’s still playable that way.

It’s funny, i actually just bought the old versions of the original CM trilogy from GOG as they were on sale. I essentially bought the first one because I wanted to replay the Chance Encounter scenario from the original demo 20 years ago and then decided, what the heck, why not get all 3? Anyways, after doing a quick bit of modding of the BMPs so that they look a little nicer I started playing the scenario as the US. It was just like I remembered it twenty years ago! I still remember when it came out, it was absolutely light years of anything that had come previous…It really brought back to me what amazing games the originals in the series were.

The day the CMBO demo came out I was lucky enough to get it downloaded before the servers crashed. When I fired it up and got to about the third or fourth turn when contact was finally made, and my StuG edged over a ridge, took fire and immediately reversed out of LOS of its own accord my mind was blown and the next year or so of my gaming time was set in stone. I haven’t bought anything else from BTS/Battlefront since CMAK though, for various reasons. I did try the CM2 Normandy demo but bounced right off it.

I did pick up the GoG versions of the original three CM games, I still have em on disc but its nice to have a download version so I didn’t have to go looking for the discs lol.
I played Chance Encounter first too, and then a CMAK scenario. Gameplay is still excellent, but the graphics were hard on the eyes, and I hate to say that as I am a gameplay over graphics guy most all the time.

Turn 7 orders are in for the Operation Sealion Kriegspiel, and awaiting resolution over the weekend. Safe to say it’s a critical moment (fuller AAR to follow once I’m sure there’s no risk of giving the enemy valuable intel).

The Germans launched a two front attack on Day One, one in Suffolk (the north of the Thames Estuary) and one on the south coast. The northern attack, despite much reinforcement by them, has stalled thanks to them not seizing an intact port, leading to what we think, based on prisoner interrogations and slacking artillery fire, them being on their last few dregs of supplies.

The Southern Front has been slower to develop. Their attempts to seize functional ports having mostly failed means that they’re finally driving north towards London in strength from Brighton up via what would later become Gatwick airport, which ran slap–bang into our attempt at a counterattack. Knife edge stuff now as they’ve got 3-4 days before their supply chains run out (we think - genuine fog of war thanks to an independent umpire) and our line south of London is under heavy attack of at least two panzer divisions (not heavy by Barbarossa standards, of course, but given the British army post Dunkirk). We’re doing some dirty tricks to delay them - a commando raid took out the commander of 8 Panzer Division, but I don’t think I’m giving away any secrets to say it’s the crux of the battle now.

It’s really good fun - each team has its Whatsapp group where we plot the next turns’ orders, under the loose command of one player who plays army commander (coordinating reserve deployment, etc.) and each of us commands a corps.

Whatever happens, it’s going to be enjoyable syncing up with the other side and trying to figure out some of their more… inexplicable decisions.

My ongoing play of World in Flames has reached July/August 1943. Overall, the Axis is ahead, but the Allies are finally making progress. Japan just had a reverse half-Midway in the Pacific, sinking two American fleet carriers. Germany still holds Stalingrad, but the Wehrmacht is in full retreat in the south, and the Stalingrad salient is becoming increasingly untenable. The Americans and British have landed in both Italy and France. Here’s a look at both beachheads.

After D-Day in France, in which the Americans took losses, the Allies have captured Bordeaux and Bayonne. But they are hemmed in by Vichy troops to the east and Germans to the north: 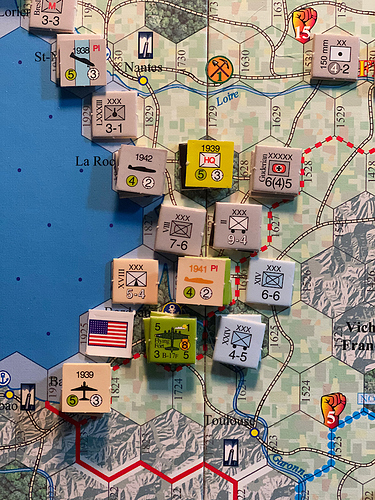 In Italy, the Americans landed next to the port of Civita Vilecchia, just north of Rome. A furious Italian counter-attack destroyed one of the two invading American corps, leaving the other alone, as here: 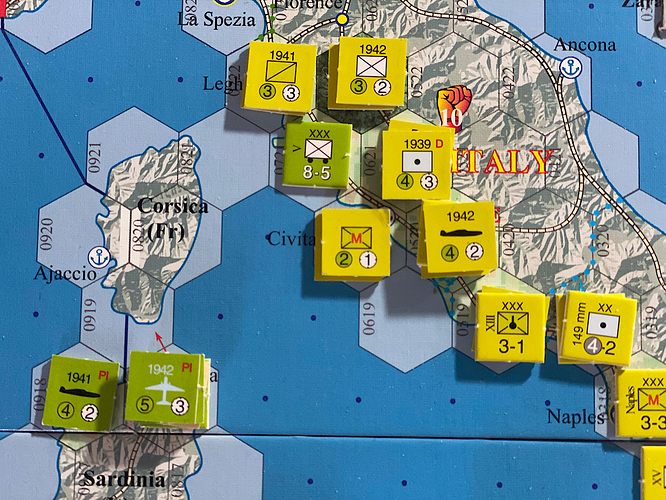 But since then the Americans have landed Gen. Clark and an infantry division, and that stack of 3 units managed to take Civita Vilecchia. Now both sides are rebasing in aircraft.

Everything about this is awesome except for the unclipped counters.

Thanks for taking care of that for me, B.

If a VASSAL module shows up, I’ll run a play-by-forum game here.

Count me in, if we get a VASSAL module.

Ok, so we do have a module. And I repeat my offer to run the game (but I would not play). Any more takers? 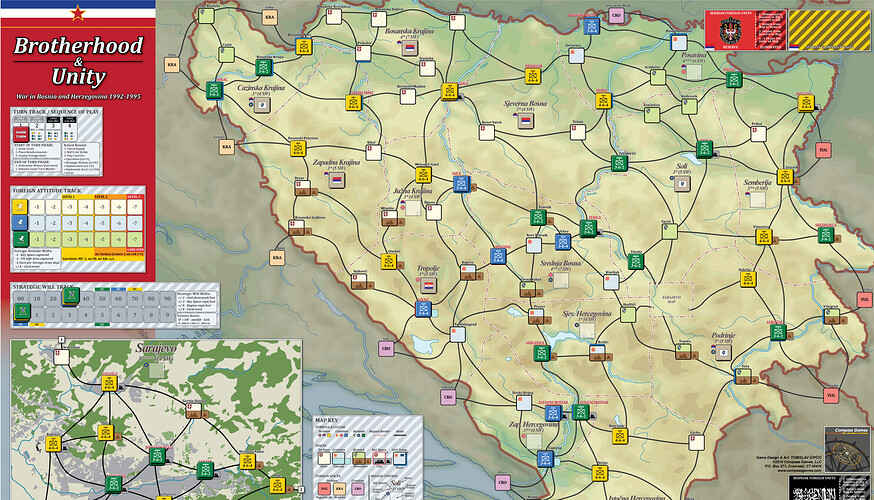 Ok great. Do we have a third? 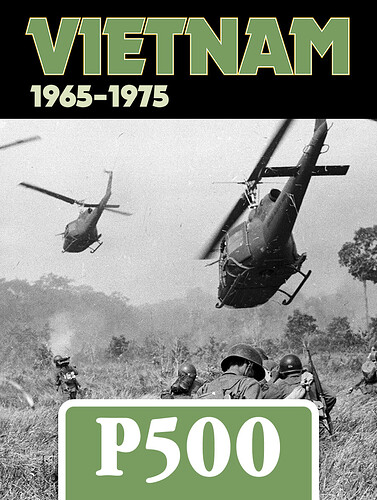