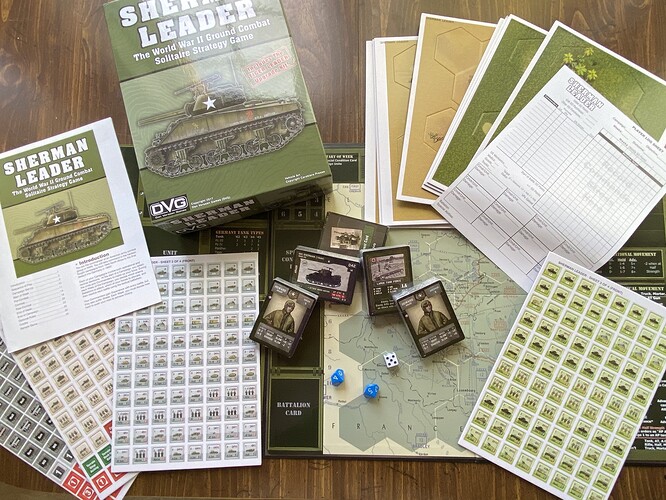 It’s got a Hollywood style solitaire combat system where 1 effective hit on a German unit kills it, but US units can end up taking a good 5-10 hits and still function. Realism tossed to the winds, but as a game-play mechanic it works out fine. 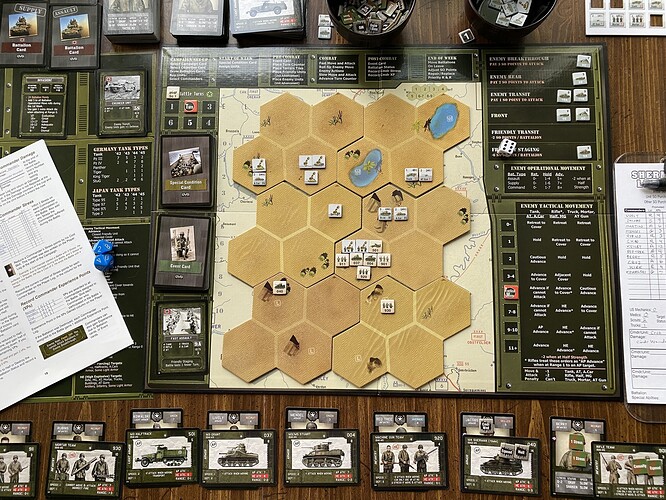 And the game certainly has a backgammon feel to it, so I think Tom’s RNG criticism’s are justified. You can make good moves and still lose, or just slam into the enemy and get better rolls and win. You’re consistently playing the odds, but I feel like there is enough strategy and ways to mitigate damage that I’m enjoying the strategy element to playing. 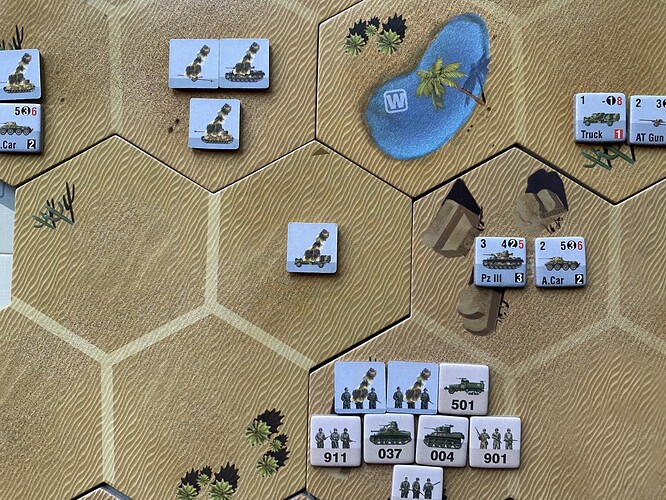 Most of all, it feels like a game that generates fun stories. In our first battle, Sergeant Cruz’s anti-tank gun got pinned down by German armored cars while some German rifle squads advanced on their position. The German’s pounded their position. Cruz ended up wounded, their cover got torn apart, and by the end of the battle Cruz’s stress rating was through the roof. But they held together long enough to take down two of the German armored cars and swing the encounter in our favor. 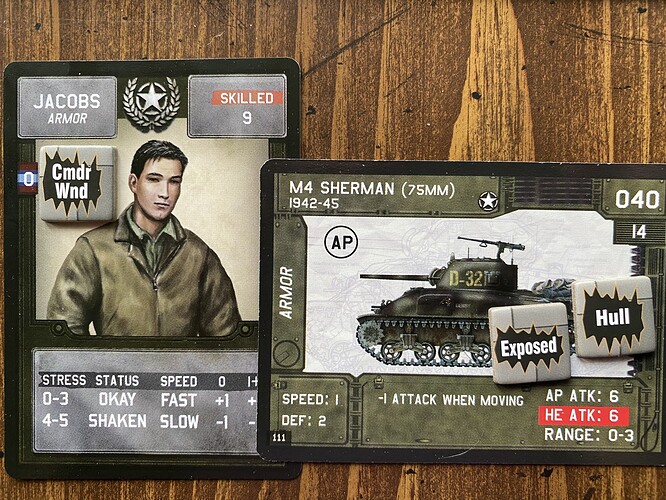 In our second battle, Lieutenant Jacob’s Sherman was a star, knocking out a Panzer III, a Panzer IV, and an armored car to stall the German attack. Jacob was wounded and their Sherman’s hull suffered extensive damage from a Panzer IV shell.

Oh, I also wanted to mention: Kudos to the designers for the diversity in their commander cards. It’s nice to be able to select people of color to lead your units.

We’re now heading into the second week, but we’ll need to pick up more victory points this week to have a chance at a solid victory.

Finished up the introductory campaign with a “good” result. It spanned six battles and by the end I started to get a feel for some tactics that were producing more consistent results. (Basically, push your expendable riflemen forward with crappy commanders to draw fire away from your experienced commanders in their hard-to-replace tanks.)

I do wonder about some of the German AI movement mechanics, as it seems like they make it challenging in many cases for certain types of German units to successfully engage with our units. Then again, it’s possible I was interpreting the rules incorrectly, because…

I realized I was doing the “to-hit” mechanic incorrectly. I’m not sure it would have changed the result much, but I’m interested to see the difference in how the game plays in the next campaign.

In any case, fun way to spend a few hours on the weekend.

WarPlan seems like a game I’d enjoy, but I like my grand strategic games to be global. Is there a global version of WarPlan, or does WPPacific integrate with base WarPlan?

Or, should I instead try to convince myself to try Strategic Command Global Conflict, or whatever it is called?

The plan is to make a global WarPlan game, but not for a couple of years probably (the Dev said he wants to make a new WarPlan2 engine before that, as well as making a fantasy wargame).

Strategic Command: World at War is your current best bet for a global game. That or HoI4.

I see now why I was confused after Googling. There’s also an old War Plan Pacific game. Not to be confused with WarPlan.

This confused me as well. I don’t think I’ve ever even heard of this WarPlan game which just shows how out of the loop I am. This is one of those games which I enjoy in theory but one that i would just get bogged down in and never actually play. So it seems to be somewhere in between SC and Gary Grisby’s WiE?

I would put WarPlan at about the same level as SC.

A coworker got Atlantic Chase so I will have a chance to play it in a few weeks. I can’t wait.

Got an email that Empire of the Sun 4th ed has made the P500 cut! But now they have to get to 700 orders to actually print the game?! Like what is this secret extra level? Why not call it P700?

Got an email that Empire of the Sun 4th ed has made the P500 cut! But now they have to get to 700 orders to actually print the game?! Like what is this secret extra level? Why not call it P700?

GMT has a fairly long queue- the more pre-orders, the more it jumps up.

Yep, I got that email as well! Happy days!

I think that making the 500 number just means that it’s definitely going to move into production. I’m hopeful that with a popular game like Empire of the Sun that it’ll pick up steam and make it through the process faster than most games. I’ve noticed that as games get closer to printing, etc., that orders for the game tend to accelerate.

TL, DR: I’m hoping that Empire of the Sun arrives at my door in time for Christmas.

A coworker got Atlantic Chase so I will have a chance to play it in a few weeks. I can’t wait.

I noticed that it was Sold Out already on their website, too. That went fast!

I wanted to put out a quick post just saying that I’ve been having a great time exploring wargaming over the past couple of months. It’s been particularly fun because I feel like I’ve got more than two decades of games out there that I’ve never played. Everything is new to me.

In any case, thanks again for the support and guidance (and patience) from everyone here!

It really is a book. 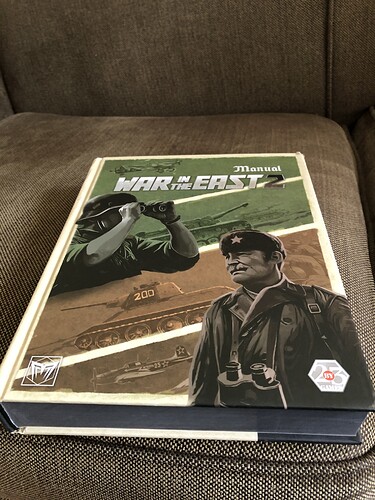 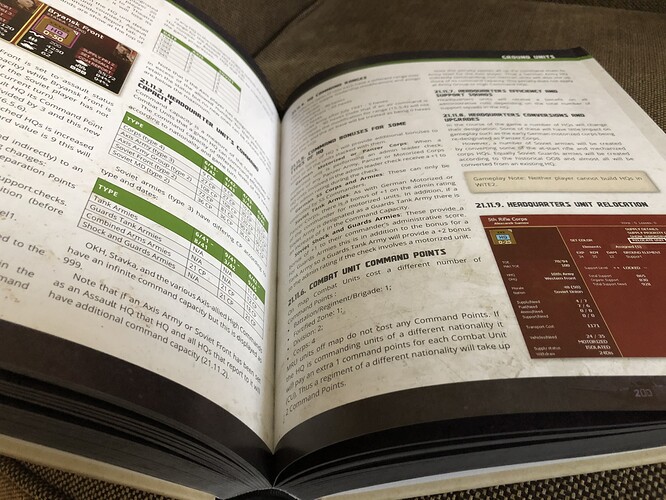 I noticed that it was Sold Out already on their website, too. That went fast!

Starting the process soon, but the process takes a while. You can still find it in online stores and FLGS, I’m sure. It’s just that GMT sold all their stock of it.

Yeah, it looks like some retailers still have some. Amazon shows 3 copies left here in the US.

It’s up next for me, once I get my Shermans out of the Philippines.

Castle Itter looks fun, thanks for sharing. It reminds me a bit of the Lock 'n Load series, but more story focused on one particular event. I’ve added it to my wishlist for a time when it goes on sale. :)