Just read on twitter and csw that Rick Barber passed away last week from a heart attack. Seemed like a nice guy online, and made some really nice looking maps.

Some of my favorite maps ever. But opinions vary. Was very sorry to hear the news. Still has maps upcoming from several games, but a great loss. I have posted this though elsewhere, but his ‘Summer Storm’ has one of the best maps I’ve ever seen. Of course he has done variations of his Gettysburg maps in numerous other games.

I could see how some might not like his style. It reminds of older maps in some civil war books.

Any thoughts on World in Flames vs. A World at War ?

I’m playing WiF solitaire now. I have it on a table that’s about 12’ x 6’. Personally I think it’s more fun solitaire than the Third Reich series, but I’ve never really given AWaW a fair shake, so I’m not sure. WiF is a pretty big commitment, though. It’s taken me 6-8 months of active play to get to Nov/Dec 1944. I’ve loved it but I’m ready to be done with my current game, which the Axis is winning. Italy is still alive and kicking. The Allies have invaded France and are poised to take Paris, but the Luftwaffe is intact and it’s slow going. The Russians are behind schedule, just now approaching Kiev, and still haven’t regained Leningrad. The US is making slow progress in the Pacific. Here’s a recent photo: 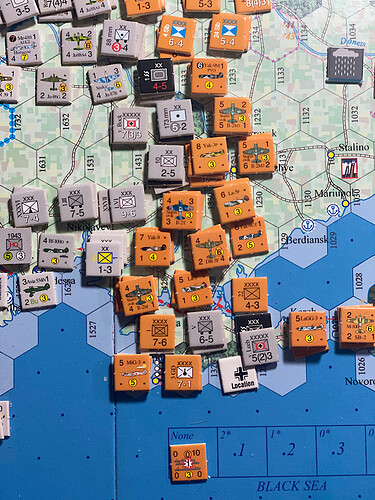 Garg! I had slid this idea to the side but … your post. Honestly, that sounds like such a fun winter project. resistance crumbling

EDIT: Is that the Deluxe edition you’re playing? Looks like there are two versions of the game, Classic (1600 counters) and Deluxe (with all expansions, 4900 counters)?

Mine is indeed the Collectors Edition Deluxe game, which now sells for $269. Yep, it comes with most of the expansions. It omits a couple expansions that I didn’t really want anyway, like Factories in Flames, and it doesn’t have a separate Africa or Scandinavian map, but I haven’t needed those. One does have to get used to a slightly abstracted system of sea-zones around the abbreviated Africa map that comes with the game, but it’s not that hard.

Yes, WiF was a great winter project – really a great pandemic project. I was stuck indoors anyway, so why not play a monster game? But now that the weather is nice, I’m finding it harder to get to the wargaming table. :)

Really nothing in WiF is conceptually difficult; it’s just that there’s lots of everything! Lots of rules, lots of counters, lots of map space, heh.

Learning the rules is the biggest challenge, and it’s not that bad. I’m pretty sure you can download the rulebook for free, though the online version doesn’t have all the pretty pictures in the printed rulebook. Those illustrations really do help, as mostly they’re useful examples of play. I like the conversational tone of the rulebook. It’s much smaller and easier to learn than, say, Advanced Squad Leader – I know that’s not saying much, lol. The hardest thing about the rules is that WiF innovates in surprising ways. Major powers can’t do everything every impulse; they choose an Air, Land, Naval, or Combined (“a little of everything”) action. Naval movement and warfare centers around a brilliant system of sea-boxes within sea areas; these boxes represent time on station, fuel, etc. The land game is the most familiar to traditional grognards, but even this has its surprises.

For me, the coolest thing of WiF is seeing how what’s going on in the Med impacts the Far East and vice-versa; deciding which front to send troops to; stuff like that. The worldwide scope is awesome.

I don’t want to push WiF too hard, because I’d hate for you to spend all that money and then never get past the rulebook. I’d suggest downloading the rules and browsing through them casually, to see whether it’s your sort of thing. 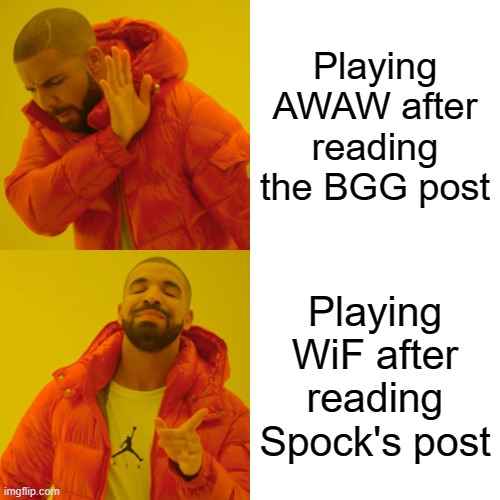 Thank you much for the thoughtful response, Spock. That’s super helpful.

I spent some time tonight spot reading the rules and watching a bit of a Let’s Play on the game. It looks like exactly what I’m looking for. I ended up pulling the trigger on the Deluxe version (found it for $229 on Compass Games site) after reading up on the differences between the two versions.

I also rationalized my decision because there are so many scenarios in the game. It’s really like 20 games in one, which means it’s not really that expensive at all. :)

I’m thinking I can play some of the smaller scenarios to learn elements of the game, then shift into a full-scale playthrough in the winter.

Congratulations! I don’t think you’ll regret it. Yes, a common way to learn is to fire up a smaller scenario first – Barbarossa, say, to learn land/air, and then maybe Guadalcanal to learn naval stuff. If you have rules questions, please don’t hesitate to post them here.

I want to ramp up homeland production over the summer to support the effort. We can’t support the war with our current infrastructure. First step is addressing table issues. I’ve found preliminary table-construction intel that I think we can adapt, but still looking around for more ideas.

Excellent! Keep us posted as you level-up your table-construction intel level. :)

Have you looked at GMT’s Unconditional Surrender ? I missed out on the physical version but I have been playing it a lot on boardgamearena.com. I would happily set up a game with anyone interested here. It is not the huge monster that WiF or AWaW is. Think of something along the lines of Advanced Third Reich.

Wait, UC is on boardgamearena? Set it up!

Do You Want Total War?

Sean Lansbury is a typical high school student with an atypical hobby: he likes to play "Totaler Krieg", a boardgame which simulates Worl...

That’s definitely interesting. Have you read it?

Wait, UC is on boardgamearena? Set it up!

Ok, so can you answer the implied question there? :P

Ok, so can you answer the implied question there? :P

Please note the implication of the quotation marks used in the original post :)

Does that mean it sorta sucked, or totally sucked?

I would not recommend it. At all.

What if I needed to prop up a table?