I’ve noticed MMP has been putting up some asl stuff on wargame vault. Did something change with licensing deal?

I have to agree with @Rod_Humble. I heard great things about this game, and had even tried the first iteration of the system with Rule the Waves. I considered getting this but the DRM actually convinced me it simply was not worth my time. The protection scheme goes beyond security into the realm of actively harassing me as a customer. No sale, no way.

Not sure. The partners hired a full-time business manager about three months ago, so I think they’re just tightening up and expanding their practices a bit. Sale…new outreach/format efforts, etc.

I haven’t investigated personally, but I suspect it comes down to interest more than effort.

I wonder if it would install on a VM?

Dunno, its custom drm that I think it generates a validation using the harddrive serial number then tosses it in an obscure registry entry. Not sure if VM would ignore that kind of scheme.

In the ideal case, you’d activate it on the VM, then put the VM onto a USB key or something for portability.

It’s possible they wrote it to detect that possibility, I suppose.

RTW2 is not uncracked, but as I understand it the crack was a total pain in the ass and I think whoever worked on it gave up so the last cracked version is pretty out of date now.

I just emailed him and asked for a second unlock code to play on my laptop. He was happy to provide. I can play on both machines without an issue.

(It is kind of a nutty approach to DRM though).

I just emailed him and asked for a second unlock code to play on my laptop. He was happy to provide. I can play on both machines without an issue.

(It is kind of a nutty approach to DRM though).

Thanks, I may do that. He is a great guy, if he is the same person who runs the nws store a really great guy, I have been and will be a repeat customer. But yeah its a crappy drm system :)

Its one helluva a game though. Damn I am having fun. Its 1905 and my Chinese Navy I had specialize in torpedo tech , light attack craft and submarines. Amazingly its kinda working, I am at war with france and just tippedthe balance of power in the pacfic by my destroyers torping a french battleship.

Meanwhile a French commerce raider met my patrolling cruiser. I love this game :) 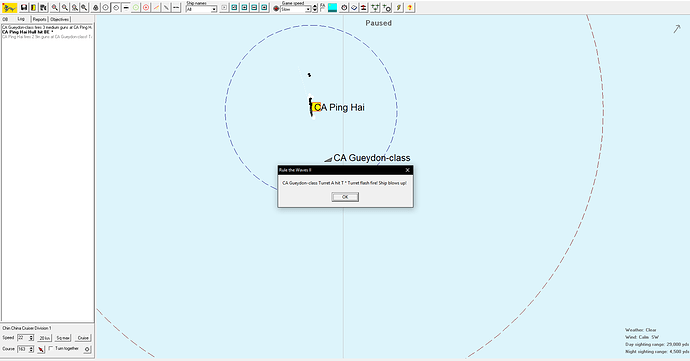 After losing a war with France and getting fired on my last run my new game has me playing China again. This time the big bully is the Royal Navy.

However the British Empire just got a bloody nose and have agreed to a humiliating surrender. My Chinese submarines with unrestricted warfare tore apart British merchants crippling the UK’s food supply. The social unrest was the perfect kindling for the British revolutionaries I had smuggled in who seized power and agreed to whatever I wanted in the surrender terms. I took Singapore and Hong Kong.

We have taken advantage of the interwar period (Sino British war of 1907) to invest in more submarines and destroyers :) 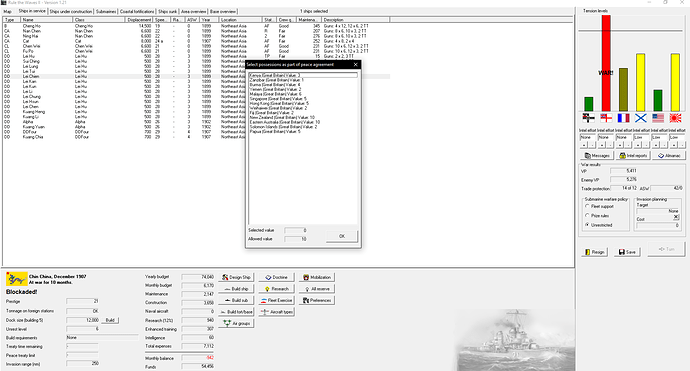 Speaking of naval games, has anyone played Fighting Flattops?

Got this email from John Tiller Software 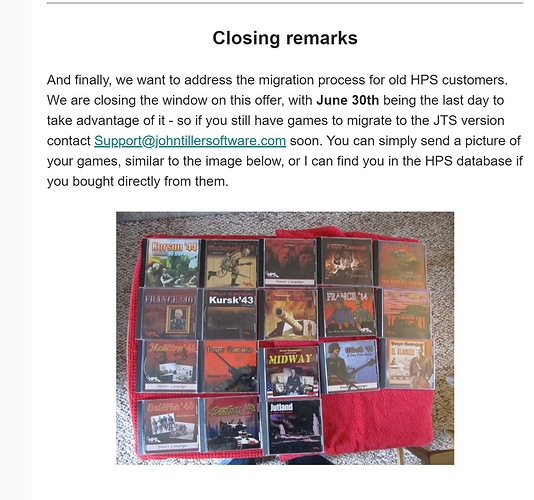 Yeah, that was a wonderful offer on their part. Allows you to get access to the updates that have been done to some of them. I was able to get my copies of Shiloh, Gettysburg, Stalingrad, and Waterloo updated to JTS store versions.

I got updates to something like three dozen games. Very slick, very nice, very appreciated. Not that I will probably play any of the games, again, but still.

This is a neat little sailing toy that Tim Stone has mentioned before. I took it for a short spin this morning. Sailing is not as simple as games make it look! 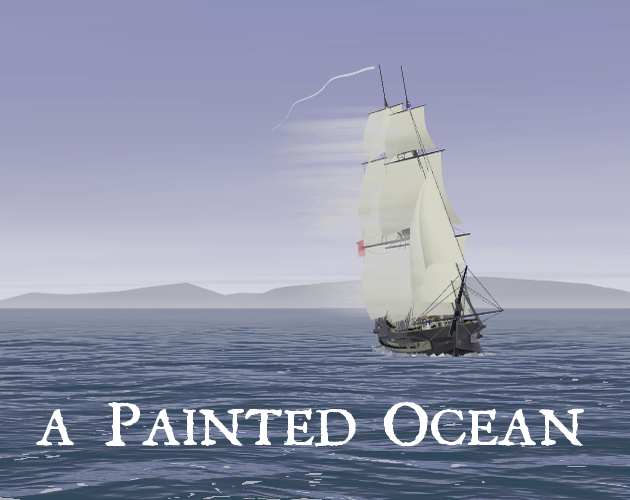 A Painted Ocean by Neil Thapen

Here’s a little thing I did a week or so ago providing Strategic framing, the Operational situation, and how those are translated into game mechanics for A Hot Dry Season: Operation Attleboro in War Zone C, for anyone interested. 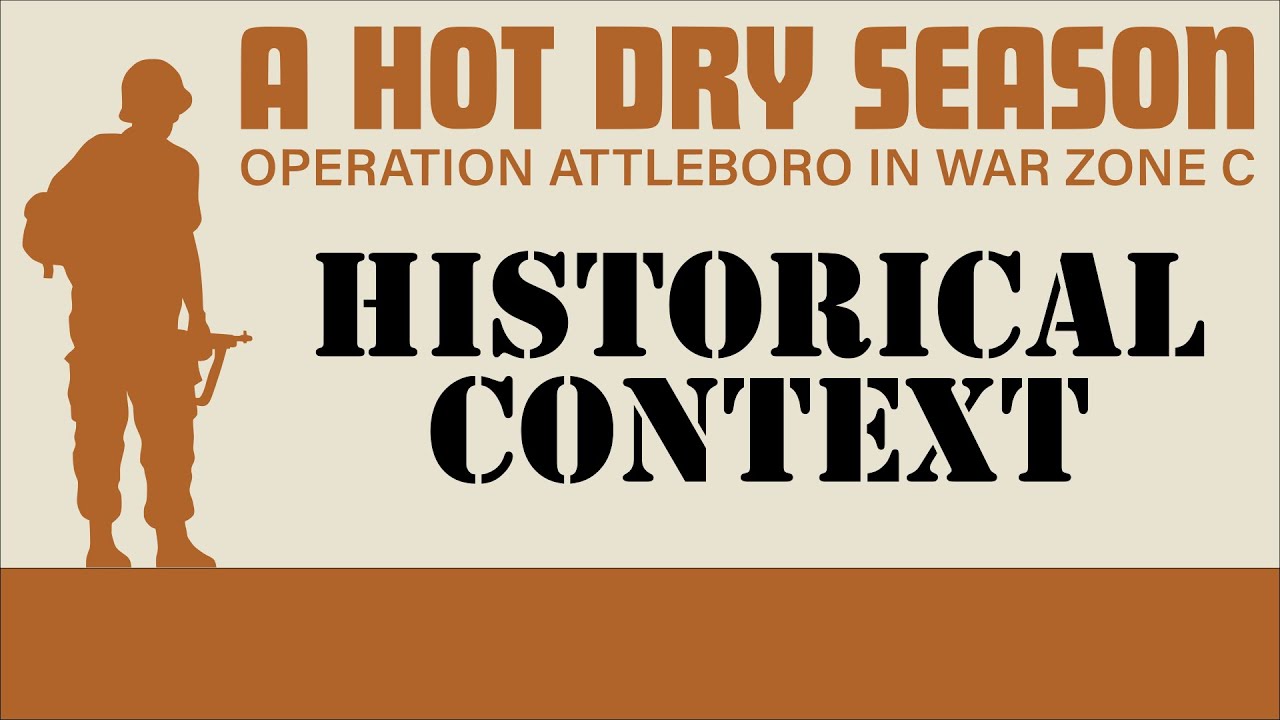 So… Imperial Struggle is trending #1 on BGG. Any (good) impressions yet? I’ll wait for the reprint if the game is as entertaining as TS.

Hmm, are people receiving theirs already? I was charged on 5/20 but mine hasn’t shipped. My expectations are certainly high.

I want to get IS but my sealed copy of TS is staring at me.

Hello all. First time user on the forum. I enjoyed reading reviews for The White Tribe and following the Westphalia game here. I wanted to know if anyone here has played or an opinion on Tornio ‘44 from MikuGames?

Oh mighty Grognards. I am looking for something you can help with:

For example, the new Lock 'n Load Tactical Digital sets on Steam fit 90% but are missing the critical part: they are not moddable. The older Heroes of Stalingard (2013?) allowed modification, but the engine and editor were a bit clunky.

I know Combat Commander and Conflict of Heroes are modern, squad-level tactical games, but they don’t seem to have good computer versions that are moddable.

I would like to use a squad-level computer war game as the basis for a creative project, but I can’t seem to find one that fits this criteria.