I have not but I can welcome you to the forum @JeremyLJones2.

Hello all. First time user on the forum. I enjoyed reading reviews for The White Tribe and following the Westphalia game here. I wanted to know if anyone here has played or an opinion on Tornio ‘44 from MikuGames?

Welcome! I have not, but it looks fascinating. If you happen to get it to the table, please let us know how it goes.

Maybe Tigers on the Hunt?
https://www.matrixgames.com/game/tigers-on-the-hunt 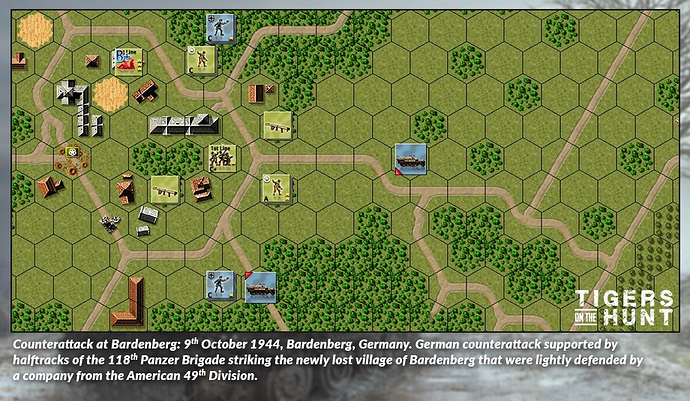 There’s a map and scenario editor, and the game is moddable - to a degree. I guess it depends exactly what you want to mod! There’s a stack of user content.

How “tactical” is TOAW4, though? I mean, it models everything from entire wars to single battles, so I am thinking it’s probably not the best choice for squad or platoon level stuff?

I wish TACOPS was still around and being worked on. That game had a lot of really cool stuff for a modern tactical game.

@milspec, JTS Simulations Squad Battles fits some of the requirements you mention. Most of the JTS games allow for extensive modding within the game system structure; they’re not sandboxes, but you can change data, images, etc. and some rules parameters.

Maybe Tigers on the Hunt?
https://www.matrixgames.com/game/tigers-on-the-hunt

There’s a map and scenario editor, and the game is moddable - to a degree. I guess it depends exactly what you want to mod! There’s a stack of user content.

If we are looking at ASL “reinterpretations”, take a look at the upcoming Second Front:

I don’t know how moddable it will be (at the very least there will be an editor), but the UI seems to be really good (and it’s very close to ASL, changing some of the SOP in ways that make sense for the medium).

Thanks for all of the feedback so far!

TOAW4: No thanks. Its operational-scale, not squad. I want terrain about 50m per hex, with infantry having a few hexes range on weapons. So “ASL like” has been good.

Tigers on the Hunt: Great! I recall it now from QT3’s scathing front-page review. :-) I picked it up, playing around with it. So far, so good.

JTS, for example Modern: Looks good, will test that next.

Keep them coming! And fingers crossed that LnL Tactical Digital releases an Editor at some point. Its a nice, easy rule set.

You can make the scale in TOAW4 whatever you want - no problem making it squad level with 50 metres hexes.

So I did not know until right now that Sekigahara had an online implementation at Yucata.de . Has anyone tried this? I have the actual physical game but have not had a chance to play it yet. I would like to finally learn this one because everyone I know that does actually play the game likes it a lot. I don’t have the rules down just yet so I am not going to inflict a totally unprepared game on any opponent but I am curious if anyone had experience with this.

I missed this but a number of us (me and @Dave_Perkins - probably a few others) have played on Yucata and it works well. They actually have some additional optional rules that helps streamline the game further which I usually turn on. Happy to play a few games on it if you’re interested.

Armored Brigade is just above squad-level, but it’s modern-day, technically real-time (you can pause and issue orders at any time). Modability doesn’t appear to be a thing, though.

You can make the scale in TOAW4 whatever you want - no problem making it squad level with 50 metres hexes.

Yes, in true Koger fashion. IMO, that sort of flexibility (squad to corps) means none of it is handled well. I’m not a fan, but YMMV.

Armored Brigade […] Modability doesn’t appear to be a thing, though.

Well, it depends on what you want to mod—there’s a database editor in the game, and a map-editing mode too.

No modding in the plugins/extending game functionality sense, though.

JTS Squad Modern seems like a good fit so far. Thanks for the tip. I did not try and mod it yet. I did not see an Editor included. Do people make scenarios by editing files directly?

JTS Squad Modern seems like a good fit so far. Thanks for the tip. I did not try and mod it yet. I did not see an Editor included. Do people make scenarios by editing files directly?

It has been a while since I fiddled with these, and don’t have any installed right now. I did work with some of the individual game designers for the battalion level Panzer Campaigns and Modern Campaigns games on a few things, and those certainly do have editors. IIRC, the editors were installed in the same directory but I think had a separate executable maybe. Otherwise you can ask JTS support, and I’m sure they’ll help out.

Thanks, found it … or them. There is a separate exe to mod each part of the game (units, stats, maps, etc) all in the root game folder. Luckily there is one PDF per exe that explains that part of the editor. Time to experiment!

Thanks for all of the suggestions. Special thanks to @TheWombat for letting me know about JTS Squad Battles. I had a distant memory of the HPS releases, and have now caught up on JTS. Squad Battles: Modern War has worked almost perfectly for what I needed.

I used it to create a Virtual Table-Top (VTT) RPG designed around a modern, squad-based military simulator. The setting is current day but with a post-apoc, sci-fi theme. Most RPGs evolved from Chainmail, the 1970s medieval fantasy wargame, but what if they evolved from Squad Leader, the 1970s WWII tactical wargame? This RPG recreates small-scale modern combat (instead of small-scale fantasy combat) with a role-playing system that allows players to make hard decisions about weapons, equipment, movement, cover, range and survival while abstracting the math by using a proven computer military simulation that has evolved over 20 years. It takes the teams from Lone Survivor and Black Hawk Down and drops them into the worlds of District 9 and Terminator.

To do this, I modified Squad Battles to better handle single unit combat. For example, I cranked up the weapon lethality by x3, turned on the “alternate firing density” optional rule to lessen the effect of fewer units in the target hex, and tweaked a few of the weapon stats. I then added a very light RPG layer where the “class” is based on the weapon being used, and for example Infantry have M16s and move fastest, Grenadiers have M4’s with M203s with a shorter range and slower move, Snipers have M24s and zero Assault defenses, etc.

I have a small alpha test with friends in about one month. I will report back if we find any fun. :-)

That sounds really cool! It’s the sort of game I would have loved when I was active in gaming clubs, in college and grad school. It sounds sort of like some games from that era, like I think it was called Commando, by SPI?

Commando allows players to play small unit raids in eras from WW1 to the cold war. Each unit represents a single man each with his own statistics for a roleplaying type game. The game has rules to play it with a gamemaster. NOTE: This item is also...

Great tip, will check it out.