Yeah Battlefront have just got around to putting games on Steam… User friendliness is not on the top of their list of priorities.

Even better it was Matrix/Slitherine that talked them into going onto Steam. What a change 15 years makes :)

Well my copy of A Distant Plain arrived today…I set it up and went through the tutorial and then carried on playing 4 handed solo just so I could carry on working out the faction options and the implications of each of them, coupled with the mental brutality that is the turn order decision making.

That first learner game I played at Unthirl really, really helped me though…

And now after 6 hours my brain is in meltdown.

However there are the first inklings of understanding of how the different factions operate and might interact in a proper game, and then the first glimmerings that this really might be a gem of a game…time for bed my brain needs the rest…

Well my copy of A Distant Plain arrived today

A Distant Plain and Andean Abyss are, what I think, the best of the COIN series. There are a lot of them I like but those two really use the system and the situation perfectly. With all the COIN volumes now there is an amount of rules bloat in some. But those two are nice and elegant.

A Distant Plain is my favorite of those games. I think about it fairly frequently even if I haven’t played it in months. Cracker of a four player game, too.

So I tried Absolut War today face-to-face. Spent most of the day. Very interesting.

Interesting in a good way? I think I have that one coming my way Monday.

I’d be curious to hear, too. I’ve read through much of the rules and the 6 pages of combat rules were a bit of a surprise. Wondering how that will play out.

Eh, the Germans didn’t deploy the full measure of their depravity on their own people in general,

I don’t know if you thought about the German jews in this statement or not. The German jews were no foreigners, they were the “own people”. Of course the antisemitism made it look like they were not part of the people.

I don’t know if you thought about the German jews in this statement or not. The German jews were no foreigners, they were the “own people”. Of course the antisemitism made it look like they were not part of the people.

Good clarification; although as I understand it there were rather few Jews in Germany to begin with compared to those in the Pale, they indeed suffered horrifical treatment from the Nazis. And while the anti-Semitic parts of the population may have viewed them as non-Germans, we would definitely see them as being part of the German nation. My idea though was that, in comparison to how Stalin much more thoroughly terrorized Soviet citizens, most of the German atrocities were committed in Poland, the Ukraine, and in other areas they occupied. I certainly was not intending to imply that they didn’t also do horrible things at home, only that their focus all along was on applying their racial ideology across the breadth of Europe.

Well by September 1939 approximately 280,000 Jews had migrated from Germany and a further 117,000 from Austria, despite the increasingly crippling taxes levied by the Nazi government on Jewish migrants and the reluctance of nations including the UK and America to accept them.

Really the only reason the number of German Jews killed in Germany was relatively low was because a majority of them had left Germany by 1941.

Played a game of Empire of the Sun against a friend and tried the CBI blitz with an unsuitable hand, this was the result: 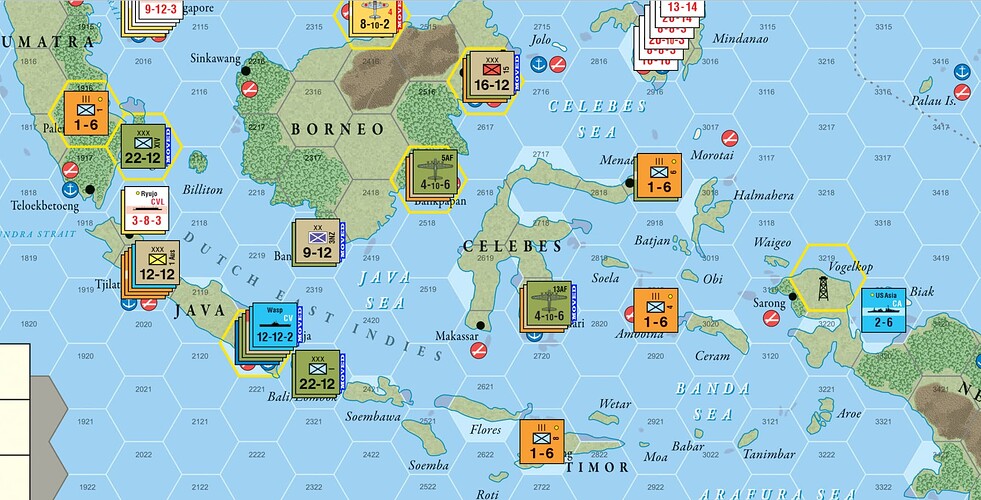 What turn is that?

Really the only reason the number of German Jews killed in Germany was relatively low was because a majority of them had left Germany by 1941.

And sadly, many ended up in countries subsequently taken over by the Germans anyhow. Which in some ways is even more tragic–imagine thinking you were safe because you made it out of Germany into, say, Denmark or France.

Turn 4. I chose the CBI blitz approach and had India cut off but leaving the British in Soerabaja let them take the Indomitable and Hermes to India and open it back up, after which point i conceded when i saw i had a very weak hand for turn 4.

I think I’m gonna write this one up in detail. I like the way he solved two (historical) problems in Absolute War that existed in No Retreat.

But not so much with Absolute War? I make the mistake of going between reading that and Fall of the Third Reich. FotTR has been winning a little bit recently so thats the manual most recently read. So I only have cursory grasp of Absolute War right now.