@tomchick, I would think, once I restarted it, in game time it was probably around 30 to 40 minutes to execute a day so around 3 to 3.5 hours to get that far? That’s not including a lot of standing over it with a bowl of cereal in hand or some such just pondering the actions I might take during a turn.

The first turns possibly a little longer the latter turns a little less but on average around that. The majority of that time is executing allied reserve placement and activating the Allied AI which is undoubtedly finicky with lot’s of “If not this, then this”, but like all these things once you get into the groove it becomes a bit easier.

Things like “proximate to” and “in danger of surround” involve a lot of hex and movement point counting just to work out what is and isn’t a valid hex to place units in. One of the best player aids I have is a bunch of different tiddlywink counters just so I can mark out possible qualifying hexes as I go through the process. I also suspect it’s a very, very difficult game to play perfectly to the rules given all the exceptions and qualifiers embedded in the rules.

On the other hand I would say that the combat is ridiculously well done, easy to execute and with some real tension present and meshes with the Allied AI very nicely.

In case anyone didn’t know the game comes with an Allied Solo and a two player mode as well as the German solo game, all with their own maps and the Allied Solo comes with it’s own custom German AI as well, including cards, charts etc. so there is an awful lot of bang for your buck in the box.

There’s a guy on youtube with a ton of different videos which look top quality, and then (and I really don’t recommend them) my own few turns of a game also on youtube (before a personal family matter stopped me in my tracks) where I attempted to give a flavour of what it takes to get into the game. They were my first foray into publishing a playthrough on youtube and the learning curve is painfully present!

my own few turns of a game also on youtube

Link plz? Unless it’s for personal consumption only, in which case I would encourage you to make another video for us in the thread!

No problem, I put it up to get some feedback, any you have would be welcome!! 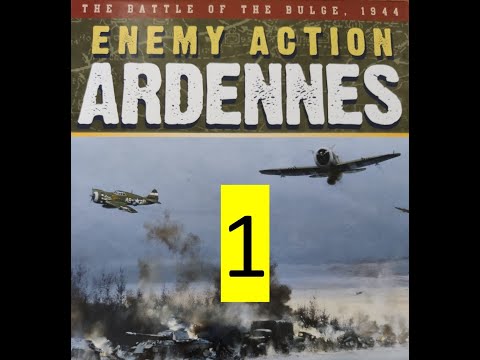 Thanks, I’m stoked to watch this. And if I may so, you have an absolutely bangin’ voice!

I will give this a watch when I have the time…watched the first five minutes or so, and it seems on the high end for wargaming videos, so good job. As Tom noted, great speaking voice, too.

I’m in the middle of a move, but this one is right on the top of my pile to replay as soon as I’m settled. Your posts have certainly helped in my enthusiasm.

Wow, those are incredibly kind words, thank you!

I agree, well done, and great voice! I own the game but have never mastered the solitaire rules. You’ve inspired me to try again!

Garg, that’s potentially an expensive sentence. But I’m not diving in there until I spend more time with EA:A. Really appreciate the AAR, fun to read and gives a good grounding in what learning the game entails too.

@Spock Thank you! I think it’s probably the best solo game I’ve played in terms of the crossover between accessibility and the challenge the AI gives you. I haven’t got to grips with EotS’s solo mode yet though, and I love Fields of Fire but it isn’t what I would call “accessible” and when I started making the videos there really wasn’t much out there beyond the inevitable unboxing videos, as I started publishing mine a different guy did exactly the same, only much, much better! So as the gap was filled and my personal circumstances changed in that period I kind of let it slide and packed all my kit up.

Also, I suspect the game I show is riddled with errors which I made as I was trying to narrate on the fly as well as enforce the rules. I know early on I was miscounting the maximum chit draw and I apparently missed a few roadblock checks and bridge demolitions according to some comments so definitely do not treat it as gospel on the rulebook!

@Zilla_Blitz It’s been on preorder for a while, so there’s plenty of time I reckon!

Also, I suspect the game I show is riddled with errors which I made as I was trying to narrate on the fly as well as enforce the rules. I know early on I was miscounting the maximum chit draw and I apparently missed a few roadblock checks and bridge demolitions according to some comments so definitely do not treat it as gospel on the rulebook!

I think errors are unavoidable and largely accepted, to be honest. I’ve started adding a “Known Errors” section in the description of my videos and then populating it with corrections or clarifications if/when they come in.

Every once in a while, I’ll get a perfectionist who points out a minor mistake and tells me to remake a video, but I think most wargamers are quite understanding.

@Godzilla_Blitz It’s been on preorder for a while, so there’s plenty of time I reckon!

I was poking about on BGG last night, and there are post about various release dates over the previous year+, so yeah, it seems like something that’s been in the pipeline for a while. Their Holiday catalog says “early 2022” for what it’s worth. I’m going to dig into EA:Ardennes more before I add another game to the backlog. :) 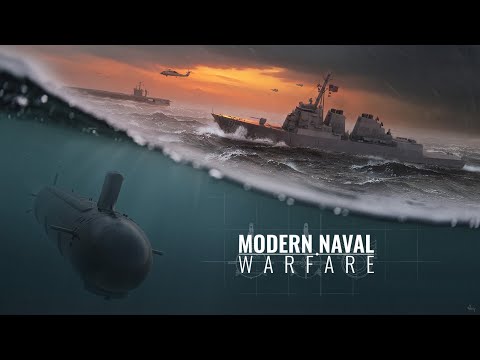 Xmas pressie sorted and clipped. Soon be getting this on the table I think.

My Christmas gift to myself has been a 3D-printed storage system for ASL counters. I like my RAACO boxes, but they are not very practical for travel and this is very compact. 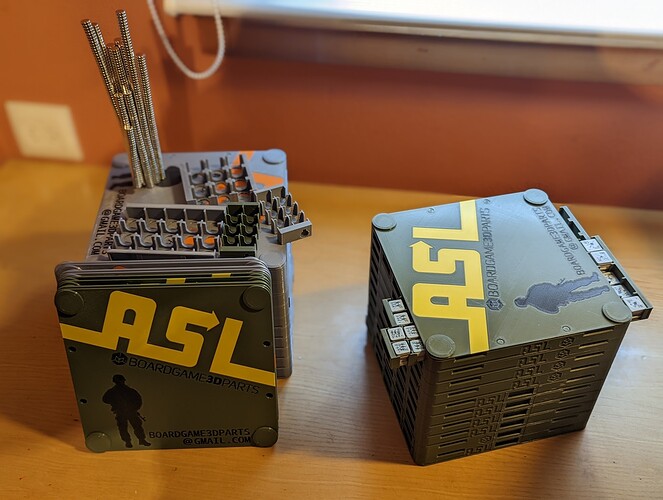 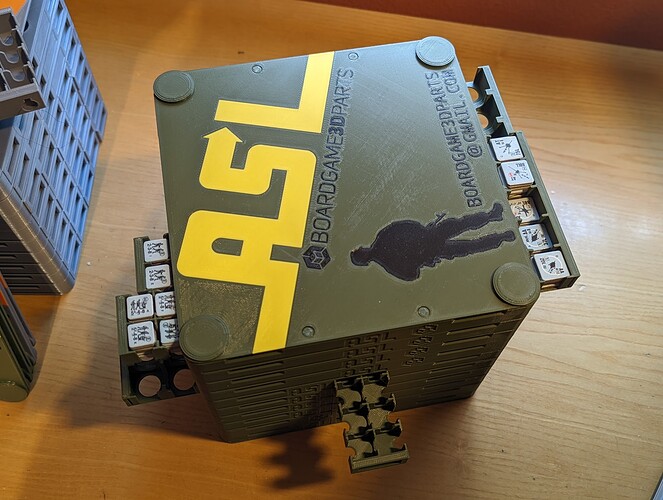 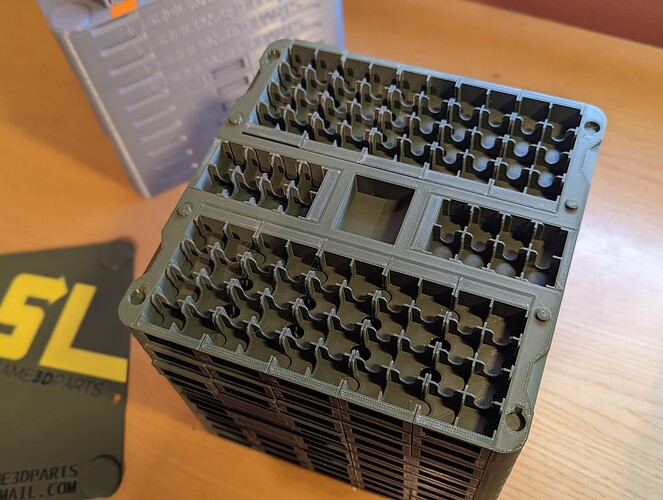 Everything is held by very strong magnets and I have several lids per box, so I can split them up in very thin cases. Here with some 15mm miniatures to get an idea of the scale: 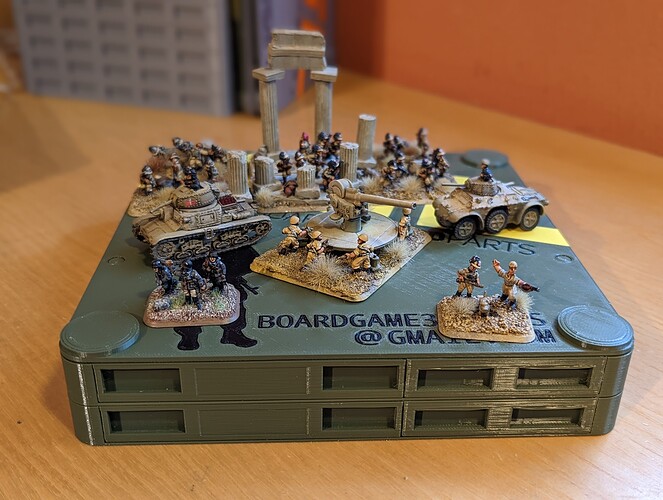 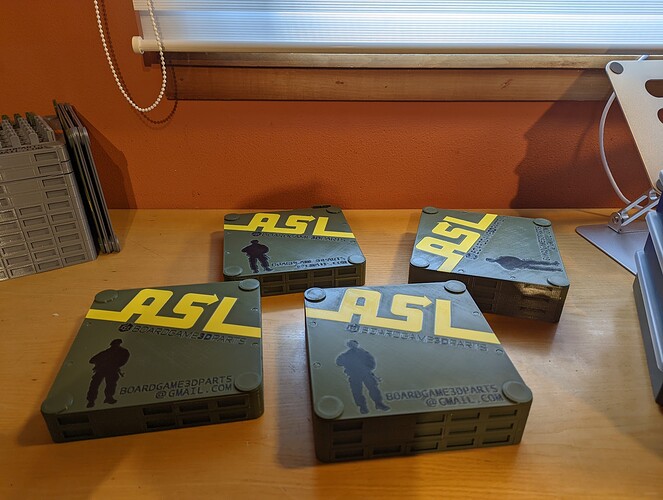 This is next to a stack of RAACO boxes: 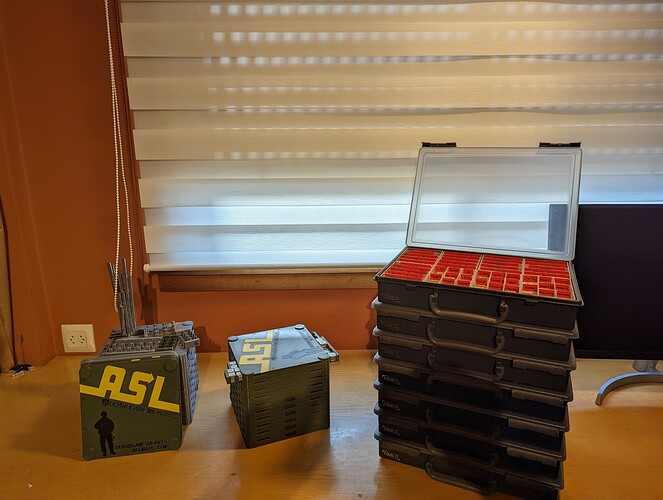 I have not played ASL since, well, pretty much when it came out originally, but those boxes are fantastic! Maybe the best counter storage thing I’ve seen. Very nice work.

They are indeed awesome…

Those are amazing. Do you use the micro-magnets to hold the pieces together?

Yes, it’s all held together with magnets:

To give an example, my German OOB has moved from one RAACO to three trays: 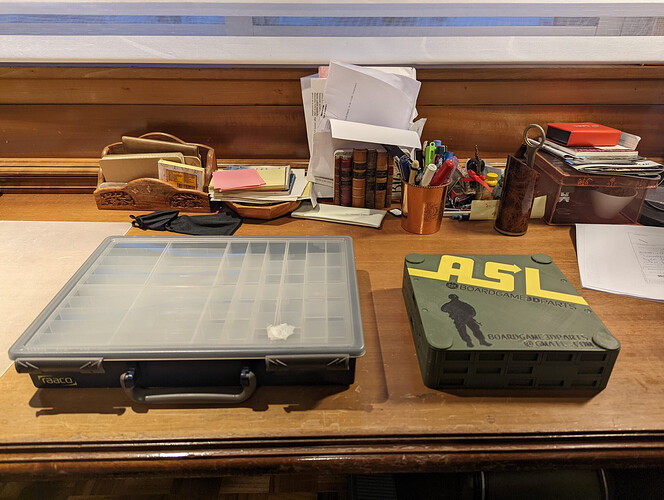 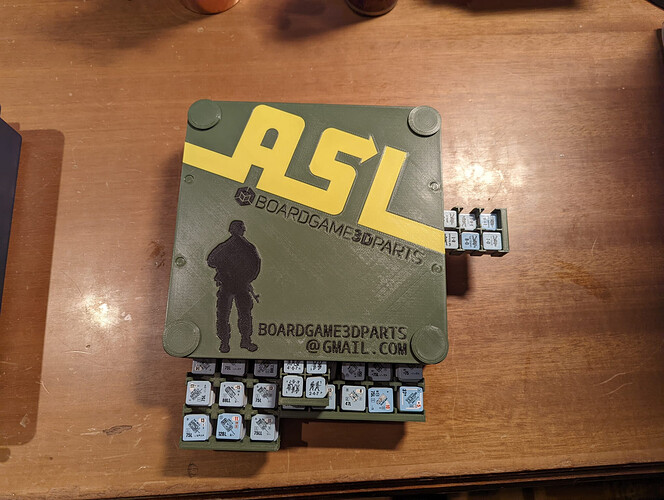 They look like they use space so much more efficiently than anything else I’ve seen, and the organization possibilities are really strong. Thanks for sharing those.

@David_Yllanes, can you talk a bit about how you’ve got the counters organized in those boxes? How do you know where to go for which counters? Or what’s in any given box? I’m not seeing any sort of external labels.