PA is liking it too

Yesterday I did a few more silly runs (one where I obtained the legendary item, Dual Edge, that gives you +1% dmg done and +0.2% dmg received per kill very early was interesting, although eventually it killed me), and finally in a better run I got to the final boss. Which killed me. or to be more exact, some random enemy appeared and applied a slow, that was what killed me.

Then again, the game gave me an incredible run where lots of scrolls and ascensions and weapons synergized so reaching the boss was easy! I unlocked the Talisman in this run, which as you may know, it has low damage but it flies with some auto-aim to the enemies and it hits the weak point doing CritX damage.
In that very same run I had the legendary scroll that multiplies CritX damage but reduces normal damage (a non factor for the talisman!) and two extra scrolls (lone ranger and lone shot) and one talent that increased dmg/critX if I fought from afar (which I could easily given the autoaim) and some other good stuff like Penetration Bullet , and a tiger build focused on Fatal Current which also sinergize with damage dealt from afar.

So all together, I was one shotting normal enemies and two shotting the more tanky ones with the Talisman, from a far and without even needing to aim well.
In the end, I lost because my inexperience with this boss, not because lack of damage.

Some other thoughts:
Frenzied Shark is the worst weapon.
Once you got all the permanent ammo improvements (and you are not playing dog who consumes more ammo), there are 4-5 scrolls to gain ammo that are worthless, the game gives you plenty ammo boxes by default.

I also unlocked 3 weapons (Scalpel, Pupil and Laser Gloves) and 4 scrolls at the same time, nice.
In fact I was starting to notice a repetition with the scrolls, despite having more than 100, on the third act you have a good amount of them so chances are, you will have several you had already on the previous run.

I can see why I have read this is the ‘real game’, as it unlocks some more stuff: 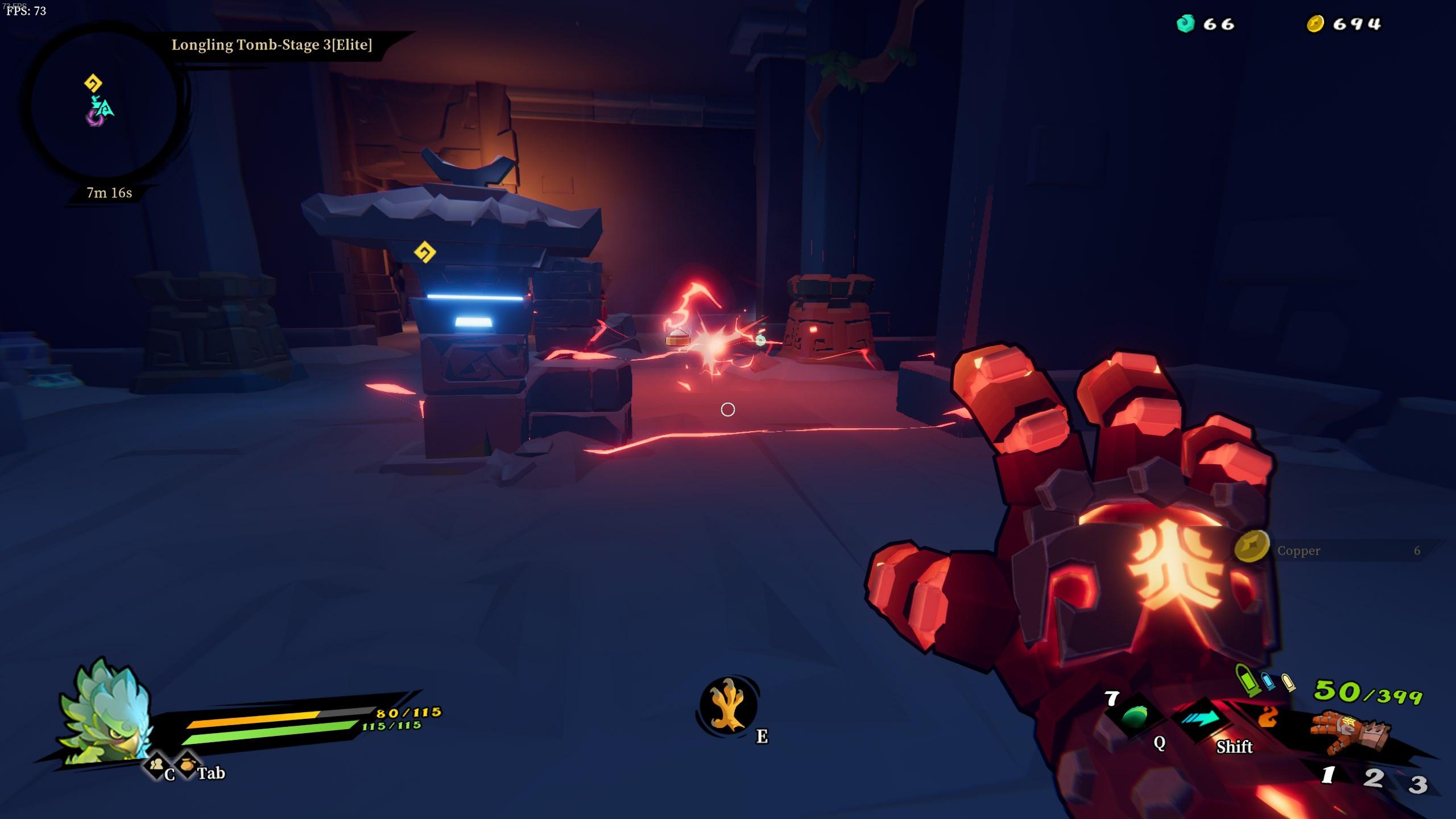 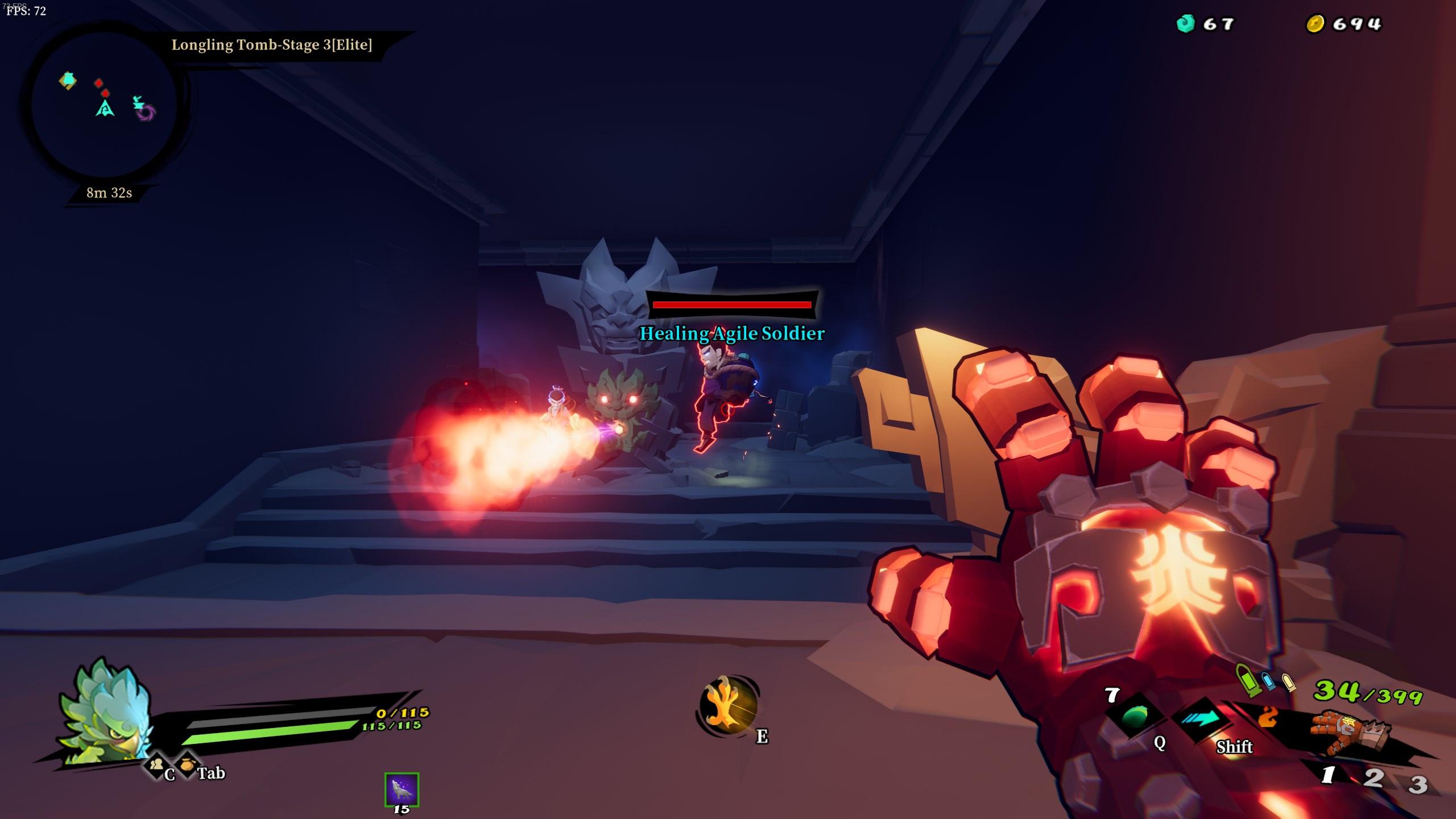 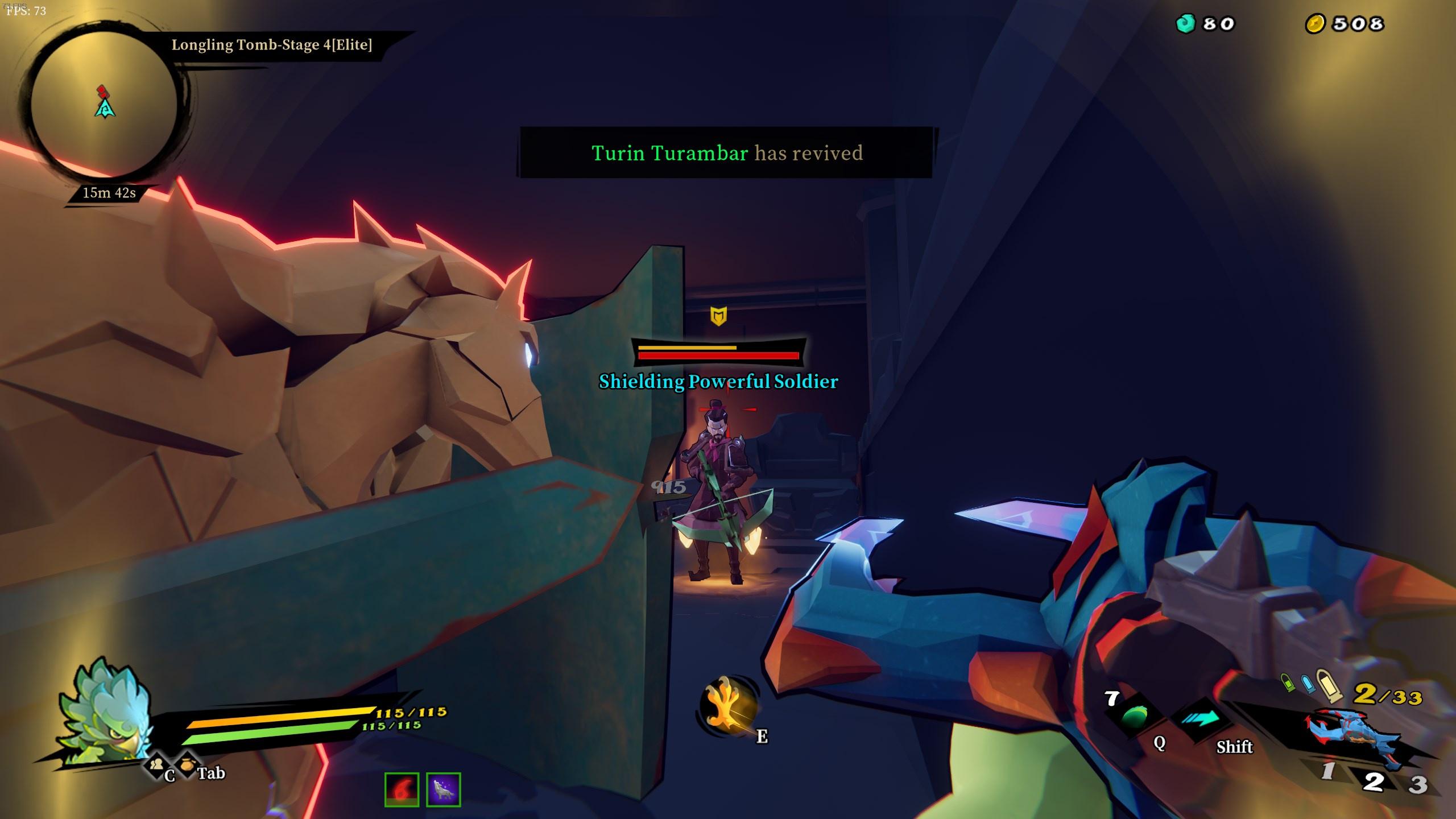 Difficulty wise, I would say it’s around 40%? harder, which is a good difference from Normal, enough to challenge the player again and continue in the hamster wheel… I mean unlock more metaprogression, apart from requiring more from him like element mastery, without being too big of a gap, turning the game into a frustrating experience.

27 hours in, I uninstalled it…

because I don’t want to burn myself when the 1.0 version is still eight months way. But it’s going to be a great game!

I picked this up because my friend who’s a new dad wanted to play it and I want to try to give him some enjoyment in the one hour a week he gets to play games. I like it a lot, but it’s hard. I have yet to get to even the second boss. I don’t like how stingy it is with the character unlocks, the Ascensions don’t feel as good to me as, say, Hades boons, and I really don’t like how unspent essence or whatever it’s called doesn’t get banked. I’ve had unlucky runs be totally worthless because I couldn’t afford an upgrade. I also think the Elite enemies and bosses can be a chore rather than fun and the Longbowmen are total bullshit. Seems like a lot of good lessons from recent games have been ignored, and in many ways the game seems like an artifact of the past rather than an evolution of the genre.

All that said I am enjoying it, and I do sometimes even play on my own.

Played this a lot this weekend! Really fun.

Interesting - I’m the total opposite. :)

It is hard (I too have yet to reach the second boss) but I feel like the ascension system, combined with my own improving knowledge of the game and skill level, means I’m slowly getting further with each run…and consistently too.

I also love that unspent essence isn’t banked. I know roughly the minimum I need for a run to be able to buy another level so if I exceed that and die, the choice to revive or not actually has some meaning ie bail now and know I can get another level up, or revive, take a hit on my essence balance, and risk that I might not earn sufficient essence in the remainder of the run to still get a level up. In some case, the revive ended up earning me a ton more essence ie the risk paid off.

You’re right that elite enemies can be a bit of a chore, but I also appreciate that they offer some early game obstacles where you’re really pressed to move and shoot in the most efficient manner to avoid your run ending.

Longbowmen (those are the ones with the ‘heat-seeking’ missiles, yes?) are fun. Engaging them from distance and ducking behind intervening cover so that the missiles fizzle harmlessly is a great little mechanic. They usually only appear on the longer rooms so they push you to keep one eye (and ear) out for them while engaging closer enemies.

I can certainly see where you’re coming from with all these points though. It’s a fine line between challenge and aggravation!

This is definitely a bit hard for me, but I don’t mind, it’s fun difficulty.

It’s perhaps, too strongly supported by the metaprogression. This is, the game is too hard at the start yeah, but eventually once you unlock everything, it’s actually too easy on Normal mode, except maybe the last two levels.

Speaking of, there is a upgrade that allows you to bank the otherwise ‘lost’ essence. Obviously, give priority to unlock it. The first level allows to bank 100 essence, which is more than enough to not be a problem. Some elites are a bit a chore in that they have too much HP, in fact fighting them can be a mistake if you don’t have the correct weapons/abilities.

Longbowmen (those are the ones with the ‘heat-seeking’ missiles, yes?)

Last update. Rebalance of the last hero, some new routes for maps 2 and 3, weapon upgrades are slightly cheaper.

When is the next content update? Not soon enough :/

The next major update, which includes a new hero, a new boss, new weapons and more, will be released this summer. Please stay tuned.

Hoo, that one was tough. On to Sports Car and Sky’s the Limit, I guess! 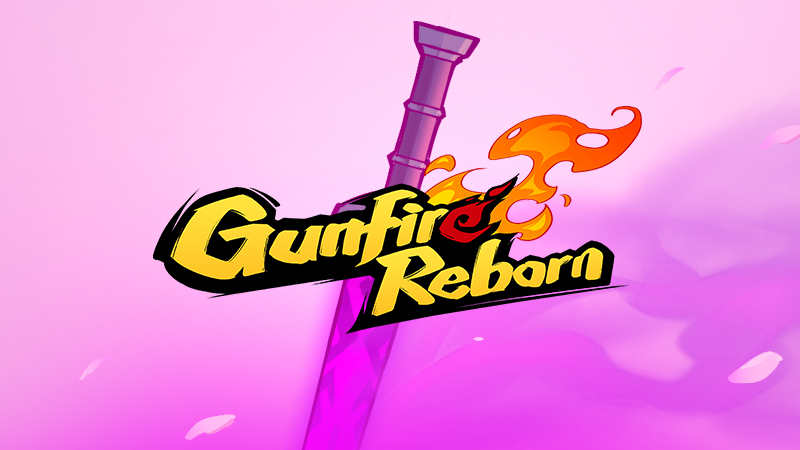 With summer just around the corner, the scheduled 2021 Summer Major Update is soon to be available free to all players. Based on the current development progress, we decide to release the major update in mid-June. The new features in this major...

Based on the current development progress, we decide to release the major update in mid-June.
The new features in this major update include: a long-anticipated heroine, a new random boss in Act 3, new weapons and adjustments to some legacy weapons, new occult scrolls and Talent 2.0. We’re still tweaking and adjusting the new content, especially the new talent system.

Game is on sale, less than 8€ right now.

Am I missing something or does the game not support a resolution higher than 1280x1024?

E - AH, you have to change the aspect ratio to get additional resolution options. That’s kinda stupid.

I was real close to refunding it.

The new update is here 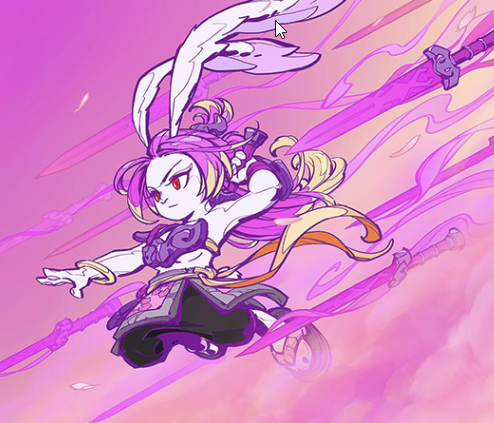 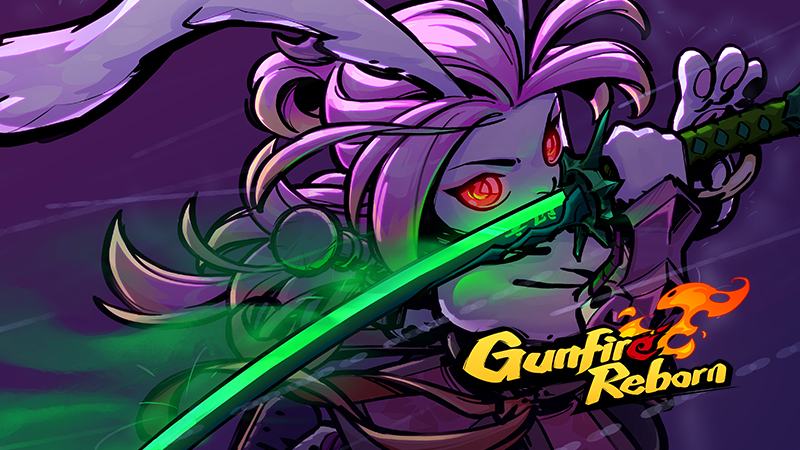 Gunfire Reborn - The First Female Hero [Tao] Meets You in the Summer Version...

I’ve been playing a few public coop runs, it seems with the update there are more people online.

The game is, surprise, easier in coop. In fact I just have beaten the game easily in Elite, and before I hadn’t even reached the Fjord stage.
In coop there are more enemies and they are more tanky (they also do more damage? not sure of this part), but with several players you can be revived, you have an easier time against enemies with shields, and obviously you can use elemental combos constantly. This three features compensate easily the higher enemy difficulty.

And as a bonus, you gain a bit more essence because there are a few more enemies.

Oh, by they way, the game has sold now 1.5 million copies.