I beat the game! Well, thanks to a random dude in 2-player coop. 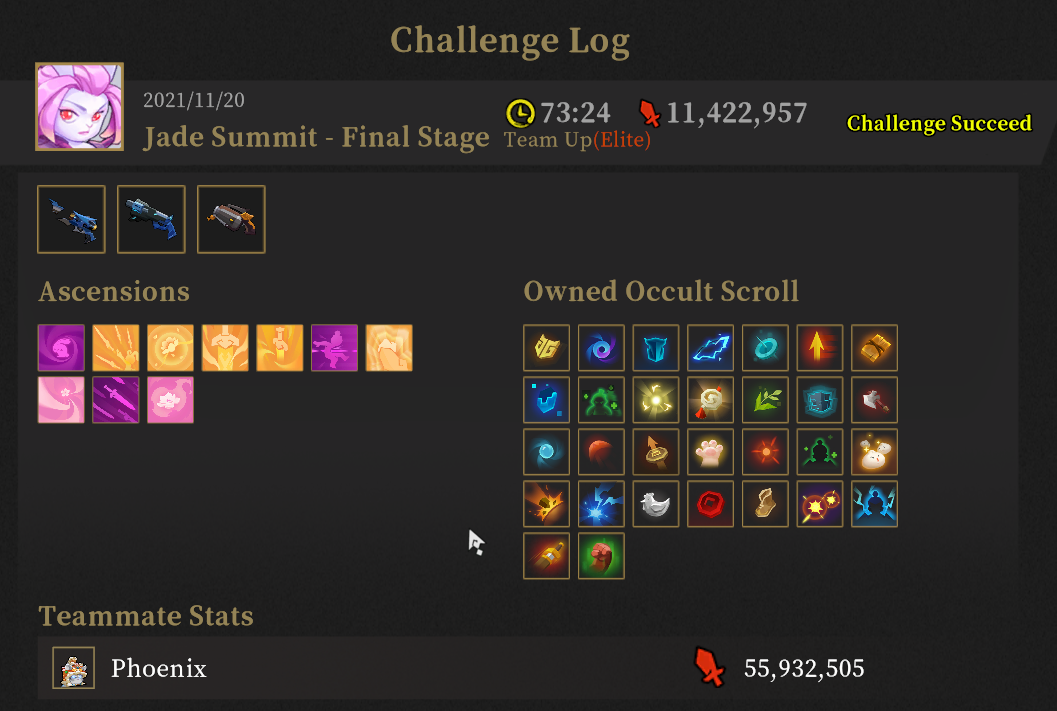 I thought I was doing it pretty well for myself, I would melt enemies if I focused properly on them, but I see now he did way more damage than me O_o
Well, I know at least I helped, I had to revive him a pair of times.

Coop makes grinding Essence much easier. You get more Essence per fight (because there are more enemies?) and you advance stages a bit faster so overall you get more essence/minute too. In coop the game is easier, because you can revive each other, you can apply more elemental combos, and there are bigger chances that one of the player gets a broken build (as there are more players) so you have higher chance of winning or getting further into the game, which also means more Essence.

So I recommend playing coop to the people who still have things to unlock.

The bad part is the matchmaking. I think most people play solo or just with friends, so the public matchmaking sometimes won’t find anyone to play (add to what I’ve said the fact there is not drop-in/drop-out, and the matchmaking is divided in between 11 difficulties).

Yeah, it’s a fun game but it often feels developed by people who missed out on the last five or ten years of game development, and the no drop in coop is definitely one of the things that makes me say that.

I wouldn’t say that much, it’s only the online part where things are iffy. For example, you can notice the lag with 4 players. Not having drop-in isn’t ideal, but then again, it’s a roguelite where games are 60-70 minutes long. And with the aggressive player power curve, new players wouldn’t be able to compete against enemies if they join a friend’ game during the mid part.

The rest of the game is very well designed. Well, the translation also could be better…

A bit of game design discussion:

Gunfire Reborn is a game with a tendency for glass cannons. And it isn’t in the player classes, it’s embedded in how the progress work

The way the game progresses, enemies gain extra hp and extra damage as you advance through the stages. This power curve is pretty steep, in 1-1 they barely can dent you, you don’t even need to avoid them, but already in 1-4 the same shot of the same enemy takes a sizable portion of your shield, and in 2-3 the equivalent enemy can screw you if you aren’t attentive.

You also gain power, in three ways:
-You find more powerful weapons/upgrade your weapons
-You get new scrolls
-You get new ascensions

And if your build is good, you gain power in ways that are not even in linear but exponential, you really can go off the rails and get insane damage numbers. And in fact, that surely is what is going to happen, because from the three ways you gain power, the first one only increases your damage, and a good 2/3 to 3/4 of all scrolls and ascensions are offensive oriented. They do more damage either directly, or indirectly (increasing rof, lucky chance, critX, decreasing cooldowns or reload times, etc). There are a few scrolls and ascensions that for example make you recover a bit of %hp or trigger the shield recharge before normally, but they are less than offensive things, and if you think about it, there are very few things that directly increase your shield or hp amounts.

So what happens is that the game in stage 3-3 plays pretty differently to 2-1. The enemies supposedly gain more and more hp… but like it doesn’t matter. You have gained even more damage at that point, so you almost instant delete enemies on 3-3 despite being theoretically a tougher stage, while in 2-1 they feel more tanky, you usually have to maneuver around, retreat from the fat guys, take care of the shielded lizards, etc. The danger in 3-3 still resides in that, while you kill them easily, they can do the same to you, thanks to their high damage. The fact your defensive perks only have improved a bit (because what I discussed already) but your damage power curve is exponential, it turns you into a glass cannon usually, even if you don’t plan for it. You have to do a very conscious effort (and some ‘luck’) to make a tanky build.

It’s funny, but I have a harder time learning the enemies in the late stages of the game because they die so fast!

I finally beat Elite in Solo, after doing it three times on coop. I’ve been close in the last two days, usually choking in stage 3 by some silly mistake, but this time, honestly, it was easy. In fact, I had a build so good that it was a pity I wasn’t playing in Nightmare or some Reinc, because I also would have beat the game on that difficulty with this. 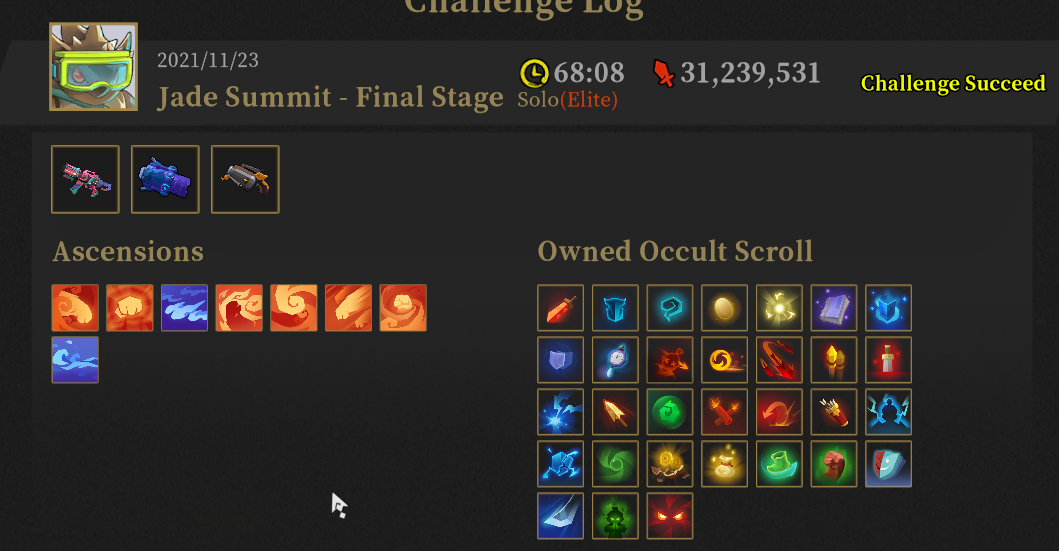 For defense, I had Lightless Shield + Phantom Skin + Reinforced eggshell + Overwhelming shield + Paranormality. They all synergize to boost or recover my shield or nullify damage.
For offense, and synergizing with my punchy build, I had Dual Edge, Energy Storage (2 uses of active Shield), Magic Watch (33% chance of not using a charge of active shield), Spirit Bible (120% skill dmg), Surprise Bonus (chance to double skill damage), double sec. skill ammo, mid Air strike (+50% dmg when jumping), Vindictive Nature (+40% skill dmg when being hit) , Enduring Caster (+skill dmg proportional to your hp/shield), and Sucker Punch (+30% skill dmg if enemies have more than 70% hp).
For mobility, I had Tactical Reload, and Strategic Advantage.

Funny thing, I scrapped by mistake my +16 rainbow arch after the third boss, but whatever, I guess, most of the rest of the game was solved by punches.

Oh by the way, we have to do a shout out to the wiki of the game, which is very complete and informative:
https://gunfirereborn.fandom.com/wiki/Gunfire_Reborn_Wiki

Is there any quick comparison for how Gunfire Reborn presents its difficulty and control-over-a-build compares with, say, Wizard of Legend?

Is there any quick comparison for how Gunfire Reborn presents its difficulty and control-over-a-build compares with, say, Wizard of Legend?

I finished successfully Gunfire Reborn on the first two difficulties. I cannot say the same for Wizard of Legend, which was too hard for me. About build control, you usually are offered 3 scrolls or 3 ascensions to pick one, and there are plenty of dropped weapons, so control is pretty decent.

I like how all of that sounds. Thanks for the impressions!

68 hours in, I can now beat Elite with regularity (and even feeling it’s easy if I have a good build). Time to go for Nightmare. I want at least reach Reinc1 as it unlocks some new build options.
Also, I just finishing unlocking all scrolls. And I have all weapons except one.

After playing this much, I’m reaching the typical point where you start noticing more flaws to the game, which were there from the start, but only now I see them.

First, the enemy spawn is way less random (is it random at all?) than I supposed at first. Funny thing I needed so much time to see it. Not the most important issue in reality, the fact I hadn’t noticed until now means isn’t that big problem.

Second, the ‘meta’ of the game is, once reached a stage of the game, to choose one of the two main weapons and pump the weapon level with upgrades as far as you can. I would prefer if using the two weapons (because ammo considerations, enemies with armor or shields, long vs short range, etc) would be maintained more time, ideally until the end of the game. But right now, upgrading a weapon to +12 instead of +5 increases the damage enough that it doesn’t matter if you are firing an enemy with the wrong damage type (-25% dmg). Each weapon level increases damage by 15%, btw. Having one weapon at level 12 is way better than having two weapons at level 8.
I’d prefer if each weapon upgrade of a weapon would cost more and more, promoting using more the two weapons. Of course, they would have to rebalance the entire game, as the final weapon level you would reach would be inferior than right now.

Turtle rebalanced (Battle Adrenaline is nerfed, but other three talents are buffed)

Dog is buffed (he needed it, beyond the gimmicky build nades)
Tiger is buffed too.

Sunder and Argus have changed somwhat.

Final boss slightly buffed (which is ok imo, if you reached the boss stage, you usually had a build to give him a whopping).

A bunch of balance changes for Reinc players.

Added unlockable frames for each hero. Each frame for each hero comes with a unique challenge for you to complete.

And finally a fail in the bug fixing section. They fixed 68 bugs. They had to fix one more! :P

And finally a fail in the bug fixing section. They fixed 68 bugs. They had to fix one more! :P

So I’m quite enjoying this so far. Solid gunplay, interesting build options, and I like where it’s going.

I defeated the first boss, entered the second entrance area, and needed to take a break. Is there any way to save the game? I couldn’t find anything, so I quit assuming it would save my progress. Well, that didn’t go as planned! Oh well.

So I’m quite enjoying this so far. Solid gunplay, interesting build options, and I like where it’s going.

I defeated the first boss, entered the second entrance area, and needed to take a break. Is there any way to save the game? I couldn’t find anything, so I quit assuming it would save my progress. Well, that didn’t go as planned! Oh well.

Yes, you can quit in the ‘in between’ world 1 and world 2 scene, where the well that recover your health is.

Yes, you can quit in the ‘in between’ world 1 and world 2 scene, where the well that recover your health is.

They really need a better highlight on that. I looked around but didn’t see anything obvious to interract with.

I don’t have any evidence to back it up… but I think the first time you reach that area, a text popup shows and say it. Surely you dismissed it without reading it?

I just reached it again and the well looks like any other background object, but when you get close and aim at the bucket you get a button prompt. I would probably have discovered it eventually but it’s pretty easy to miss.

It’s possible that I clicked through a popup the first visit though, but still it could be a bit more obvious. A little sparkly glow for example.

If there was a pop-up I missed it too.

I’d probably done a dozen or more runs into the second world before I got fed up and googled to see when they were going to add a mid-game save option. And that’s when I discovered the well…

You know, this game is pretty good! The second area is where it comes alive. I mean, the first is satisfying, but the second starts to show its potential off in a big way. It is one of those games where progression makes the game better, combat gets better, movement gets better, tactical combat options get better. Now I want to get the first area over with as fast as possible so I can get back to the desert, but you can’t go too fast, you need those upgrades and scrolls. I can see player upgrades will make it easier to get the weapons you want faster, once you unlock those options. It’s an old trick, but it works.