Tough to recommend specific boons, since odds are you won’t get them (unless you use a specific trinket, maybe), but deflect dash is pretty righteous and would help against Meg immensely, I think.

Thanks for all of the suggestions and as it turned out I just needed to follow the law of Qt3 - Post that I’m having trouble, play one more time and succeed :-)

Turns out that unlocking the Aegis Shield improved my survivability greatly and I was able to take her out.

I still wasn’t able to reach Elysium again, but I’m doing good progress on the metaprogression. 19 tries in 7.5 hours, and I have unlocked all the weapons, have 4 new aspects, 7 or 8 keepsakes, and all the cheap reforms (<100 gems) are bought.

So, impressions. No that are needed anymore but still, I like to write them.

-Art is beautiful and distinctive. The line style and how the animations and effects are done makes me think they carefully considered the legibility factor, important in a fast action game like this.
-The combat is fast and flows so smoothly, it’s a joy. Enemy variety is good, with more than 30 enemies.
-I like how they try to make the environment as something more interesting than plain combat rooms. You can make enemies trigger traps, bring down columns, pushes them to lava, etc
-An aspect of the game that didn’t convince me at first is the weapons (weapon number exactly), however that’s because I didn’t understood at first how much the boon system can change things with different modifiers applied one on top of another, and we also have the infernal aspects to unlock. In fact they are well designed, sometimes I am surprised how weapon X make some encounters easier than in my previous run, but other types of encounters are harder too. There are tradeoffs always, and each weapon feel distinct.
-The boon system is plenty deep, I discovered yesterday that there are duo boons too? and it seems there are legendary boons obtained in special ways. The in-run decision making is well rounded up, as we have to add things like hammers, gold, pom of power, hearts, etc.
-It has an interesting ‘curse’ system, offering special bonus for the rest of the run if you can play x rooms with a random negative modifier. In fact i like it more than the one in Dead Cells, there is more variety to the curses themselves and it’s more forgiving than 1 hit = dead.
-The metaprogression is super solid, in between short term goals, medium term goals (getting all keepsakes and leveling them up) and long term goals (like leveling up infernal aspects), there is a difference too in between things that improve you (the mirror) and things that potentially improve the run itself (the reforms).
I also like how there is put alternative character upgrades in the mirror, that way there is more variety allowing more builds while still constraining how powerful you can be, as you has to choose between type A or type B for each.
-The game is challenging but still have difficulty options like the god mode, and the hell mode for veterans searching a challenge. It repeats too the custom difficulty system (here, only once you beat the game once) of their past games, where you can apply a mix of custom modifiers to make it harder, and in exchange obtain new bonuses too. 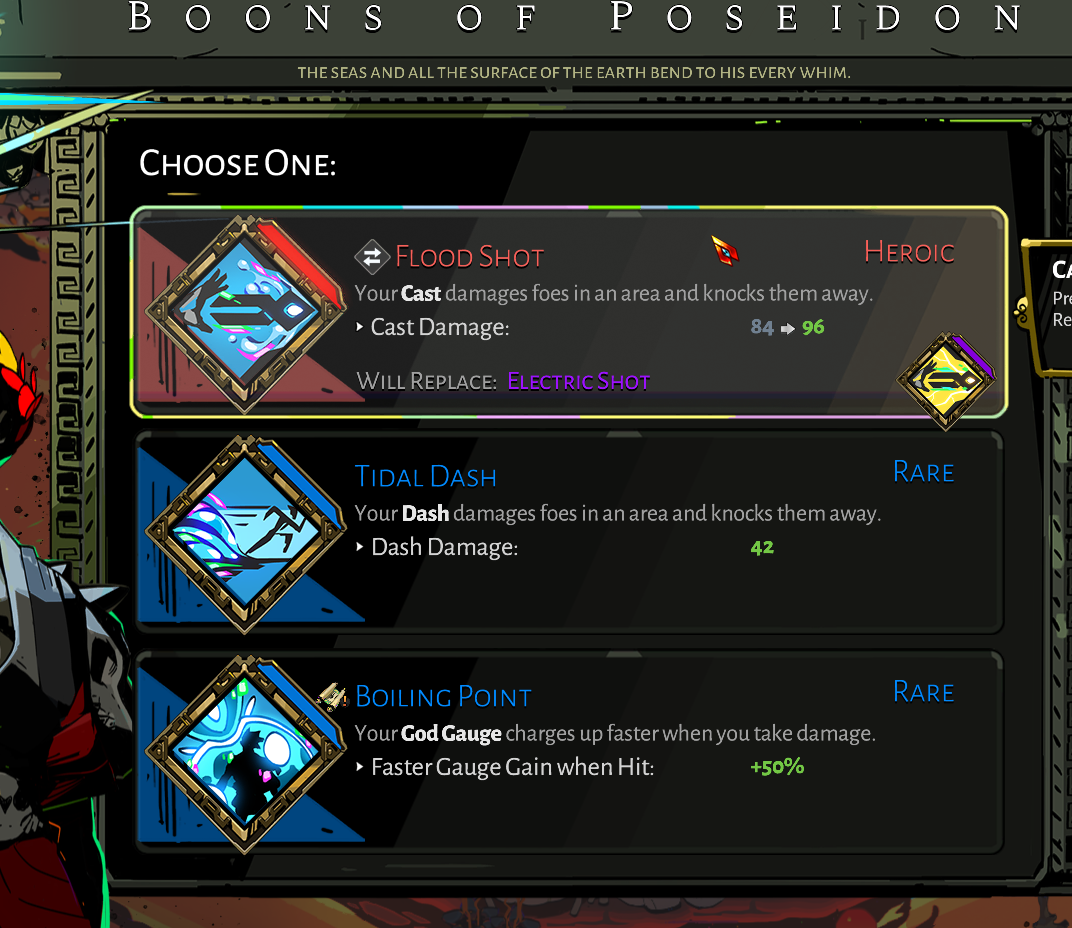 I definitely took more than 12 attempts to finish the game - and that was back when the game only had Tartarus and Asphodel. :o (I think it was overall a bit more difficult though since it lacked many weapon & mirror upgrades and boons that make survival easier these days.)

and it seems there are legendary boons obtained in special ways.

The Hades wiki probably has an answer on that one, but I guess the prerequisite for a Legendary boon is already having a few (maybe 2?) boons from the same god/goddess. The rest is down to chance.

My first win!!! And to make you guys who thought you’re bad at this game feel better, I did it after… 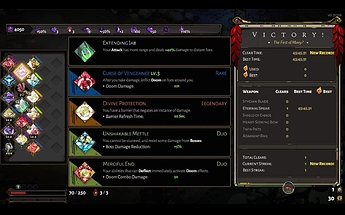 … 38 attempts! I didn’t activate God mode and wasn’t realized about what it does until like 20+ of sessions. It’s one of those few games that I didn’t feel bad about losing badly nor I felt my time was wasted. All the enemies have recognizable attack patterns and you just need to learn it while patient in timing your attack. I think I could have finished off Hades way earlier if it wasn’t for the latest update that varied the boss fights attacking patterns and new enemy types that I haven’t learned to deal before.

Tips if you’re struggling: You’ll always do better and better. The best boon for you is always from Athena. Heck, I dare say Athena’s Divine Dash is The Best of All Boons in the entire game. It works against all boss fights so what I always do in the game is to equip Athena’s trinket to ensure I’ll always get her boon before starting the climb. With 2+ Dashes and Divine Dash, you’ll find yourself reaching Elysium 100% of the time.

Pick a weapon that suits your play style. For me, spear may be the worst weapon for others but it’s good for defensive player like me. It’s great in crowd control and decent in range attack. It may not be a fast weapon but it doesn’t matter to me since I don’t have the dexterity to play fast weapons anyway.

Don’t forget to get boons for every mode of attack: Attack, Special, Cast, and please make sure to get a Call before the boss fight in Elysium.

Other notable boons are ones that give you Impervious. Ares and Poseidon’s Calls are the best calls in the game for noobs as they deal heavy damages while giving you decent period of invincibility. Best Cast boon IMO is Dionysus’ by which the hangover effect is great in disorienting the mobs and bosses while dealing 100 DMG to all enemies within a good range of blast radius.

I’m eager to play this again by using different weapons and boons. It’s still in EA but safe to say it’s my GOTY of 2020 easily.

Yep, it’s resets every room. It’s something that confused me at first.

Yep, it’s resets every room. It’s something that confused me at first.

Does it lose anything when you get hit? Each time I’ve looked at it, it barely has been filled.

The Call accumulates if you hit or receive damage. There are 4 slots but you can trigger it once the first is filled. However, triggering a full meter has way better effect since it lasts longer. And yes, the meter is reset after every encounter. So if you think you’re nearing the end of an encounter, don’t hesitate to end the battle quick by using your semi filled Call.

Tips: Hermes has a boon that auto accumulates Call meter but I don’t find it useful for myself. If I’m not mistaken, there’s a boon, possibly from Ares, that will fill your Call meter faster when you get hit. OTOH, in Elysium boss fight, save your Call (100% will be filled since it’s a long battle) to unleash it on Theseus as he’d also trigger his own Call once his health is below 40-50%.

I’ll have to pay more attention to the meter and try to make use of it. Thanks!

It’s one of those few games that I didn’t feel bad about losing badly nor I felt my time was wasted.

Yeah, even a run that doesn’t work gets you some more interaction with the cast, which is cool.

Don’t forget to get boons for every mode of attack

I use my special so infrequently on every weapon. Possibly a flaw in my play style. I also kind of hate casts mostly and would probably never use them except I have that trait or whatever that makes me deal 10% extra damage when I don’t have any on me, so I try to get rid of them as quickly as possible and refrain from picking them back up.

I use my special so infrequently on every weapon. Possibly a flaw in my play style. I also kind of hate casts mostly

Ouch, I just cringe for your Square button!

Me, too. This game is probably gonna kill my controller.

When did they add god mode? I’ve been tempted to buy this on EGS before, but I don’t think I will ever get past Meg, lol. Looks like back in December. Hmmm

It was added in second last update. Tip for fighting Meg: Athena’s Divine Dash (all her projectiles deflecting back to her), lol! Have you tried the Eternal Spear? I thought it’s the most friendly weapon to use. You could just spam Specials on her and Hydra boss fight.

Additional tips: pillars and walls are your good friends. They block every form of attacks and the collapsing rubble around them damage everything but you. When you start to see land mines in higher levels, battle around them too because each of it deals 600 DMG to everyone including you after trigger but it can easily be deflected if you have Divine Dash.

Appreciate the tips. I don’t have the game. I never bought because I know I will be horrible at it, but I love watching people play it.

Have you tried the Eternal Spear? I thought it’s the most friendly weapon to use.

I cannot relate to this comment at all. I want to love the spear, but I kind of hate it instead. It and the sword are the only weapons I haven’t beat the game with. I consider the fists the friendliest, probably, followed by the railgun.

I thought so too because of my bad experience with roguelite or platformers like Spelunky, Hollow Knight, etc. nor I have the dexterity to be competent in any fighting games. Supergiant Games are clever in Hades game design where expert players would find a decent challenge in the game while average players like us have a decent chance in winning as well because the Boon system allows different player profiles and play style to flourish.