@Kolbex I just fired up the game to check where the heck I can upgrade the Aspects and I felt like an idiot. So it’s to be done at the weapon rack all along?

@TurinTur I find Elysium boss fight being the toughest fight in the entire game because you need to watch out for two guys at once. By the time you reach the last boss your skills in this game should be matured enough to outlast him. It took me 3 runs to figure out the final boss fights whereas I died like 10+ times against the Elysium duo.

I died in my latest run experimenting with Adamant Rail. It’s too slow and too weak for me. Not too mention the constant need to reload the rifle is tedious to play. I’m shelving it.

Yeah, you equip a weapon and then interact with the purple lightning ball it leaves behind to change aspects.

Attempt #30. I got to the Hades fight. I beat the Theseus fight with this Rocket + Cluster bomb combo.
I only got Hades down to 50% hp before ending up dead. But it’s nice that encounter unlocked a few new enemies and the goddess Demeter.

Am I crazy or the Rail is very polarizing weapon?
I am able to make it work in three ways:
-get the hammer to change the primary fire
-focus on the special shot
-get some very specific boon to modify the primary, like the one that gives it autoaim.

But I can’t make it work firing it in the standard way, even with two boons that give +% damage to primary fire with a pair of upgrades. It’s too little DPS once you reach Elysium.

Attempt #19, finally made it to Hades, using the spear. Knocked him down once, but when he got up again, that was the end. Oh well, gives me hope for the next run. The spear with the 3 spit upgrade was helpful.

I think some of that kind of constitutes a spoiler. I know when that happened the first time, I was fuuuck, oh man, of course. Very unpleasant surprise that should not have really been that surprising, I guess.

Man, I hate the Rail. It just can’t make those numbers.

Knocked him down once, but when he got up again, that was the end

You’re almost there! To me his second stage fight is easier than the first because you’ll be fine as long as you’re staying away from those gropey hands.

The best Hammer upgrade for the spear to me is the one that does auto jabs by just holding the Attack button. @Kolbex controller was crying for that upgrade.

The Rail was my first victory. I think I got the delta chamber for it about halfway through? I can’t recall now.

I watched a walkthrough-guide run in youtube, and while I still have to improve in my skills, what I learned is that the big difference is my lack of knowledge in the game. The dude was going for specific god boons that were good for his weapon while avoiding others, and then going for a specific duo boon that he knew it was excellent for his build, getting first the complementary boon, and then picking a specific god keepsake and rolling again the doors until he got it. In the end he used self-guided blades that melted enemies in two seconds. I was watching it and thinking ‘Not picking things randomly? that’s… that’s… cheating!’.

I joke, but really, building a correct build, rpg style, is a more important factor than I believed at first. I guess because the game is solid as an action game it fooled me in that regard.

The key was to use the shield as a…shield and block damage with it. Innovate I know. Well the real key was the ‘charged shot’ modifier, allowing me to block damage and also prepare a decently amount of ranged damage, piercing too.

Well, you guys really seem to like this… I hope they announce a console version sometime soon.

So after the latest update I noticed a drastic reduction in the availability of boons. Prior to the update I would routinely make it to the final boss with the amount of boons I’m seeing in the final screens I’m seeing posted here. Now though? I’m struggling to even get a boon on all my powers much less the amount I’m seeing here. Has anyone else noticed anything like this? My room choices have gone from almost always having at least one god boon to lots and lots of gems/purple crystals/keys, etc. I’m wondering if I might have accidentally picked an option that reduces these?

How to use the ambrosia? You have to use the nectar in someone several times before? The wording in the wiki is slightly confusing.

What’s the easiest Heat 1 modifier, in your opinion?

@agapepilot I don’t think there is a way to modify that, even if you wanted.
But you make a good point, in the runs you have to choose between bonuses that will help you try to have success in the run, and resources to improve (slowly, after the first 15 hours) the hub and won’t help in that moment. So it’s a bit punishing, because as usually you have to pick 1 of 2 or 3 options, by picking advance a 2 or 3% if your current metaprogression goal, you are actively hurting your chances in the immediate gameplay (the run).

The only heat 1 modifier I’ve gone with so far is the one that makes traps hit harder. I think it might make the lava in Asphodel worse, too, which is…bad, but the other options all seem worse to me.

As far as ambrosia, the game says as much as you have about it, so that’s my understanding, too, but I have yet to be able to use it. Just stockpiling for now.

Made it to the hydra (I think that’s what it’s called), but it killed my a couple times. It seems doable though. My last run I had the spear, and with Jab it was pretty amazing. Pretty hefty range on it. I think it was the fastest I killed the whip lady.

How to use the ambrosia?

You need to build relationship with NPCs, once you reach high enough relationship or complete their favor quest, you will be able to gift ambrosia to them. Also certain NPCs has secret stash gift which can only be upgraded by using ambrosia. (The easier one IMO to get secret gift for is from Skeley)

This reminds me of those roguelite deck builders in which you only add cards that synergize with each other, scale it and avoiding bloating your deck. But in Hades, you can always accept the boons from the Gods you don’t enjoy playing and sell it later at the end of each level for good money or replace it when you see the boon you actually want (Replacement always result in getting boon of higher rarity). Correct me if I’m wrong. Oh, and congrats on your first win! 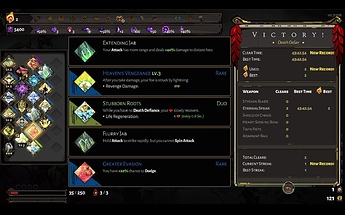 My second win with Middle Management enabled. It was a battle fought to the tooth as Hades could finish me off with just one more hit. I think I can handle Middle Management with my current skill level, just additional elites for mini boss fights, which means a prolonged battle without additional damage buff for them and this can easily be handled by Athena’s boons. I know I know, I’m such a fanboi of Athena.

BTW, Athena’s Divine Strike is just god damn useful against Theseus. Every Theseus’ javelin throws can be deflected as long you’re facing towards him while spamming square button on him.

I wonder how people build the bow. And I mean real bow builds, not picking the bow and then focusing on casting or weird dash builds. I tried to focus on straight damage on one run:
-I had a starting boon (or hammer upgrade? can’t remember) that that does +100% damage on an easier to execute power up shot
-I got a attack damage boon at level 8 (!) and an another one at level 4 (thanks to the boon of 'pom of power applies twice).
-I got a damage keepsake.

The burst damage of a single arrow was pretty good, but still, the overall DPS wasn’t enough, in comparison with other weapons at the same point in the game. Why? Because you lose time repositioning yourself a lot, aiming and releasing the arrow, that’s why the real DPS (think total damage every 10 seconds) wasn’t good. I get that ranged weapons should do lower damage than melee weapons to compensate being safer to use, but it wasn’t really any safer, not being able to move while holding up the aim is already big enough of a con by itself, now add that the low DPS means encounters were 33% longer than with other weapons, that meant more time to make a mistake and being hit.
I’m still learning the game, but it seems to me the bow needs a buff.

On other news, I discovered a nice synergy between two Poseidon buffs. There is one that does +300% damage when you push enemies into walls, and another that does aoe damage + push in your dashes, once leveled up both it’s funny to just dash around and seeing people die hitting walls.

My so far sole bow victory was when I got the hammer first thing and selected (though I was tempted by the one you chose) the upgrade that removes power shot and lets you fire continuously by holding down the button. Literal game changer.