This is a thread to track the choices in an Arena match for Hearthstone (Credit to Trung Troung who after reviewing a deck I drafted said it would take way more than him to give my any help).

I will create a post for each choice in the drafting portion with what I would choose. Hopefully some other (much better than me) players will post their choices. Once a consensus is reached I will pick that and post the next. After all is said and done I will then proceed to win at most 3 games with the deck because I am horrible at this game. I would like to make several picks a day (31 in total, 30 cards, 1 hero) so hopefully it won’t take over a month.

Here is the first choice, which hero do I go with? I haven’t played much rogue and I’m not too confident in druid, so probably would choose paladin? What should I pick? 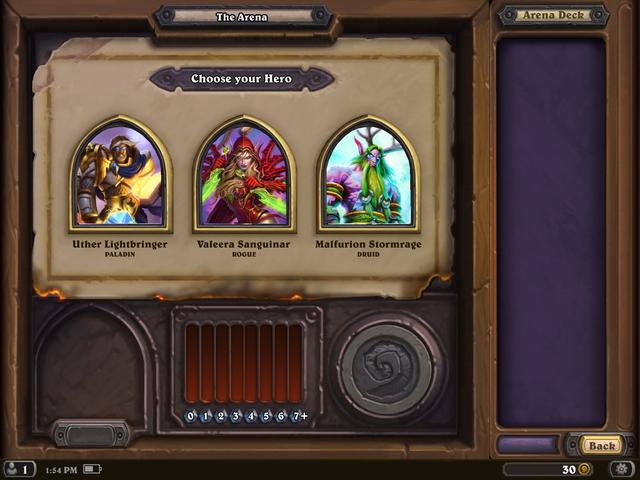 Why don’t you pick Paladin, then, so that you can chime in as best you can? That’s my vote!

Quick suggestion for things such as this: set a schedule and stick to it; otherwise people will get discouraged and drop out. Just a suggestion.

Agree. Go for Paladin and let’s go from there.

I haven’t seen either of those before, thanks!

Not sure if others have better experience with it, but even with solid-seeming decks, I don’t seem to have the kind of success I expect. So my suggestion is Druid.

Both Pally and Druids are great because of easy access to AOEs. Those are usually 2 for 1 if not more so they are extremely important if you want to be consistent.

OK, seems Paladin is a good choice. I’m interested to see what you guys say is a good pick here. 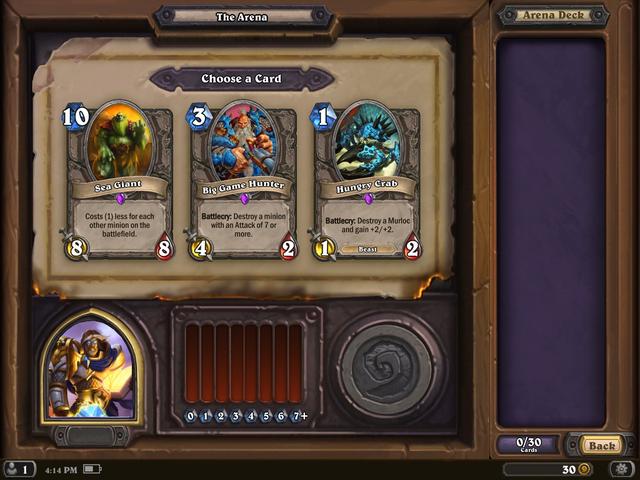 I would go with the Big Game Hunter I guess. I’m trying to talk myself into Sea Giant because the paladin can create lots o little guys, but… If I see anything that says “Murloc” I don’t even consider it.

Edit: One reason I’m not any good, I don’t read cards. I though the Sea Giant ability only applied to your own minions, I guess I would go Sea Giant now.

Definitely Sea Giant for me. With your ability and the uncertainty on your opponent’s ability to remove creatures, you should be able to get it cheaper.

Also, it’s a big scary critter and a good finisher.

Never seen one before! I want.

I would take Sea Giant too. BGH is nice when it can kill something big, but you also can end up in situations where it’s just a 4/2 for 3 mana, which often trades down. Sea Giant is another way to deal with your opponent’s big creature and you can almost always find a turn to play it where you get great value out of it, especially with classes like Paladin and Shaman who tend to have a lot of guys on the board.

Sea giant. It’s easily my favorite of the giants for all-purpose decks. Big Game Hunter is good and would be a solid pick as well. But I think Sea Giant is probably a bit better.

The crab is generally not good unless you’ve already been building a crazy murloc deck. And even then, it may not be as good as the other two.

Sea Giant it is…

Next pick a little harder for me. 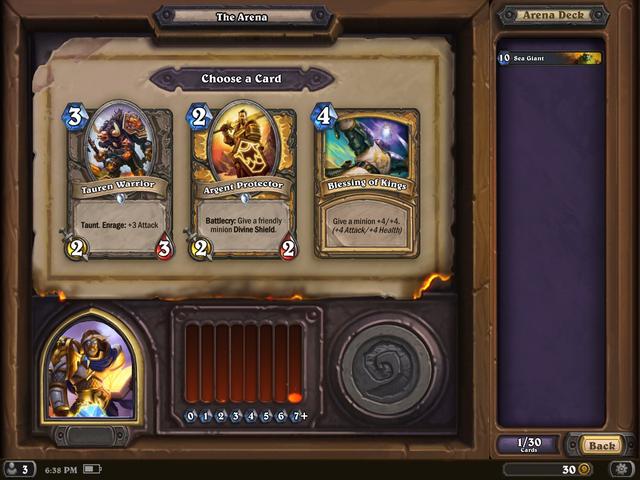 I think go for the Argent Protector, although Blessing of Kings is nice too. Thoughts?

I’d go with BOK. You know that measly 1/1 squire of yours that your opponent left last turn? It is now a pretty impressive 5/5 that can attack right away. Always a spanner in your opponents plans.

I think both are great cards. Argent Protector is usually an insta-pick for me, so that’s my vote. If you think about having an empty board, then Kings is a dead card but the Protector still has some value (though I doubt I would play it on an empty board, unless really desperate).

Argent Protector, hands down. He lets you make a suicide attack minus the suicide, or he can add a layer of protection to something that needs to live another turn.

Depends if you think you’re going to cast the AP’s shield on anything less than a 2/2 minion. On a 2/2 or bigger the AP is usually the better choice here, but then again I prefer more bodies instead of the all eggs in one basket strategy.

Argent Protector is more likely to give card advantage either from having to attack and break the shield or blowing an extra removal spell and is never a dead draw. Giving it my vote.

I like Argent here, mostly because Paladins have so many good 4 cost class cards already and I’d expect to easily fill out that slot in the rest of the draft. It’s also a bit more reliably useful, as mentioned, Kings can occasionally be a dead draw.

Yeah, they’re both good, but but AP gets a slight edge.

I like Argent here, mostly because Paladins have so many good 4 cost class cards already and I’d expect to easily fill out that slot in the rest of the draft.

Yes, this. I hadn’t thought about it but you’re going to want to pack as many Truesilver Champions and Consecrates in your greedy little pocketses as the RNG will give you.

Edit: Oh, and to make things a little bit faster, if you want, you might ought to pick without consulting us if your choices are, like, Truesilver Champion, Wisp, Thrallmar Farseer. The tier lists don’t tell you everything you need to know about drafting, but when your choices are a top- or near-top-tier versus two turds, there are basically no situations where you want to get out the poop shovel.