I just wanna plop out some Iowa’s not hand design an Iowa and it’s variants.

Yeah, I think one of the great advantages of WW2 as a setting is that a lot of your playerbase has built-in knowledge and understanding of the equipment in play. Also, seems like it should be a good source of the types of asymmetry that’s popular in big strategy games.

Anyone taking a stab at the latest DLC “By Blood Alone”? Focus Trees for Italy, Ethiopia and Switzerland, along with improvements for the air game.

Playing a couple of runs as Ethiopia sounds like alot of fun, makes it tempting. But Victoria 3 is coming out soon so hmm…

Not yet. Kind of sucked into Warhammer 3 at the moment. If that starts to fade before Victoria 3 release then I’ll dive in then, otherwise it’ll probably won’t be until the holidays (unless Vicky 3 sucks or is horribly broken).

I’ve been waiting for an Italy tree rework since the first expansion so I’m looking forward to it!

I need to figure out more of the existing stuff still. Is it just me, or do individual countries have mechanics that don’t give you much of a hint on what you’re expected to for what results, and then punish you for doing poorly?

Either way, there’s a very long list of patch notes in an open beta, and some are very wtf.

Hello there generals! You might have already seen two forum posts made by our Game Director and Tech Lead, about how to assist you with common issues. I have made this post to cover all of that in one single place, and to also invite you all to...

And some seemingly bad air design balance. Vicky 3 must have eaten into it’s launch window, because it isn’t baked.

They have a new lead with this one as well.

What’s the general feeling on By Blood Alone?

I still haven’t really gotten around to learning it, but am thinking of trying the new Italian focus trees.

I do have:
Man the Guns
Waking Tiger
Toether for Victory

Any other must-have DLCs?

I picked it up but haven’t had a chance to do a playthrough yet. Too many other games taking up my time at the moment, including Victoria 3 with its recent release. I hope to be getting to this one sometime over the holidays, I’ve been waiting for a new Italian focus tree since the first expansion!

The feeling online seems to be that they broke the game with BA.

I also watched Pravus’s run in By Blood and he didn’t seem to have too many game breaking issues.

Wow. People are not happy with this DLC. I’m not sure I’ve ever seen such a united force of players say, “this is just awful” with such clarity. 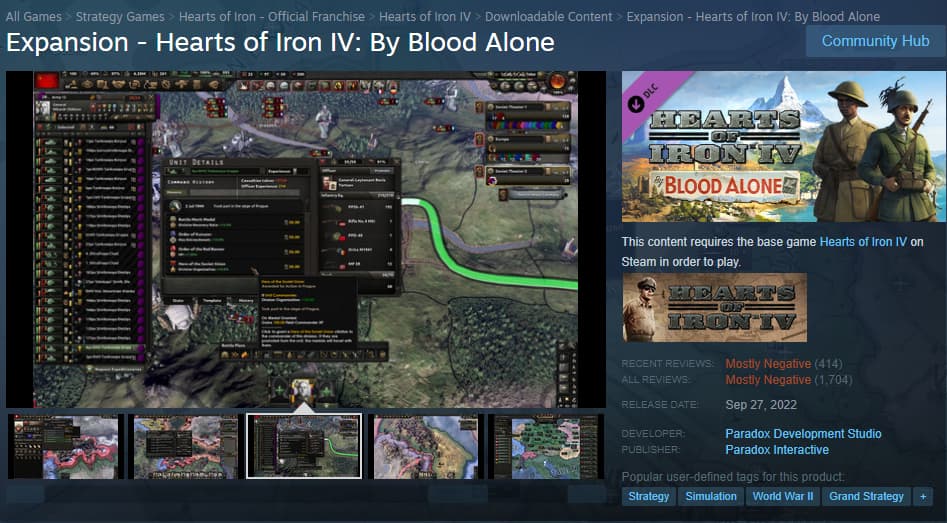 This is quite possibly worse than Leviathan. This is so bad that I… I don’t even know where to start.

They broke peace conferences, for starters.

Yes. The thing everyone hated, they made orders of magnitude worse. Want to de-Nazify Germany? Too bad, you ran out of the now finite pEaCe pOiNtS and while you were able to create a puppet Germany, you ran out of points, so Hitler still exists and is in power in Bohemia. You can do nothing about this.

The new focus-trees? Mediocre. Who cares. Barely qualifies as enough for a free-update.

I legitimately have no words. I can’t even think straight. There is so much wrong that it’s like trying to focus on one pixel on a static-screen, I can’t pin down thoughts.

Air-wings? They are now hard-limited to 100. Aircraft-carriers? They no longer automatically upgrade the aircraft. You have to manually delete the carrier-wings and replace them.

Generals? You can now no longer just promote one like an admiral. You have to promote a division commander. How much does this cost? 100 command-power.

Embargoes? You can only embargo a nation that has generated 15 world tension. This effectively means the only nations anyone can embargo are Italy or Germany.

Just… don’t buy this. Not even a patch will fix it. The devs have stated a lot of these absolutely despised, garbage, incompetently made systems and “mechanics” are working exactly as they made them to.

Honestly, consider just ditching the game. I’m not sure it can be saved. It’s in such a horrendous state that it would take months of patches just to bring it back to pre-BBA quality.

I don’t want to give up hope. I loved this game. But it has been the absolute worst managed Paradox game, of all time. It is the single greatest waste of a community, of potential, that I’ve seen.

Man this is sad. I have 2000 hours into the game. It is been almost year since I played it last.

Honestly, No Step Back with its supply system only slightly less complicated than Shadow Empire , pretty much killed the game for me. By Blood Alone didn’t even sound that interesting to me, other than the Italy focus tree. But this reminds me of what happened to Surviving Mars, the new studio DLC broke it and took a few patches to get working again.

HOI IV, was surprisingly good at release, but still had bugs some QOL issues, AI and several missing area. The first 3 large expansion were all worth gettng, and I think HOI IV hit the top of Chick Parabola.

Man the Gun greatly added to the complexity of naval warfare, but the AI never learned how to design ships, so I think it was a net negative to the series. La Resistance, added spies, and added a lot more things to have a check on. It really was out of place for a grand strategic game. So now two and run that made the game worse, or the very least greatly decreased the speed that you could play the game.

WWII is an evergreen topic, it is like dragons and orsc. There will always be demand for games on the subject.

Doing one every 5 years or seems like a much better idea than adding increasing complexity.

The conference changes are in the base game, thought right?

Is it me, or are Naval Invasions just… weird? I am trying to invade Armenia as Italy:

I press the “activate order button” and months go by and … nothing happens.

I’ve been stymied a time or two wondering why the invasion wasn’t happening and wishing the UI was more clear as to what the problem was, but your bullet points covered everything I was going to suggest to check.

Naval invasions do take some time to prep. If you’re sending 10 divisions, it’s going to take around 70 days, if I remember correctly. You mention months went by, though, so I’m assuming this is taken care of as well, and I believe you should see the days counting down.

It’s been at least a couple years since I played and the last few campaigns didn’t involve navy, so my memory is really fuzzy on the details.

Well, I once had an invasion that didn’t go because the country hadn’t actually joined the war…

Here are also some screenshots. The only thing I can think of is it won’t let me declare war even with a justification

What does that “Division Still preparing -10%” mean? 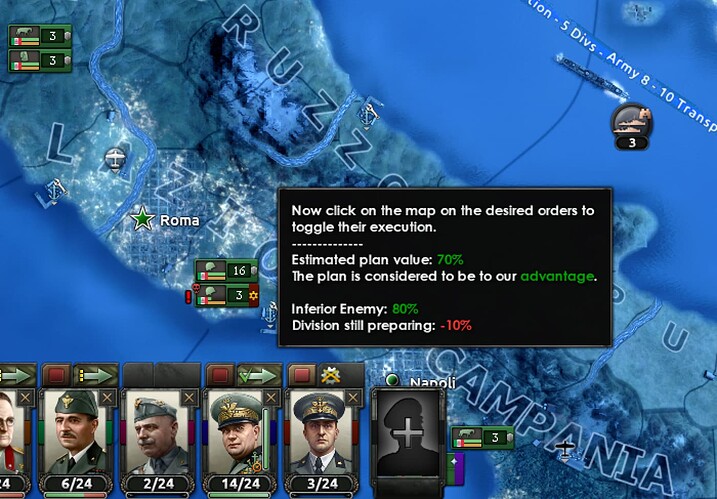 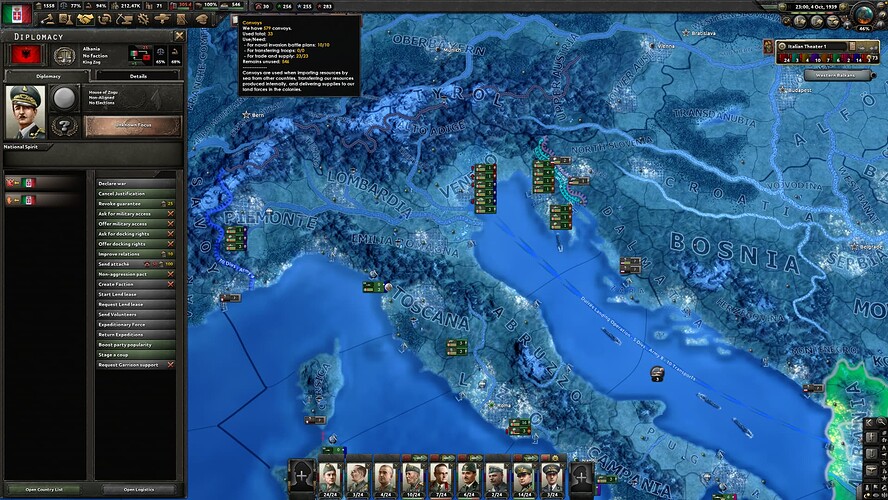 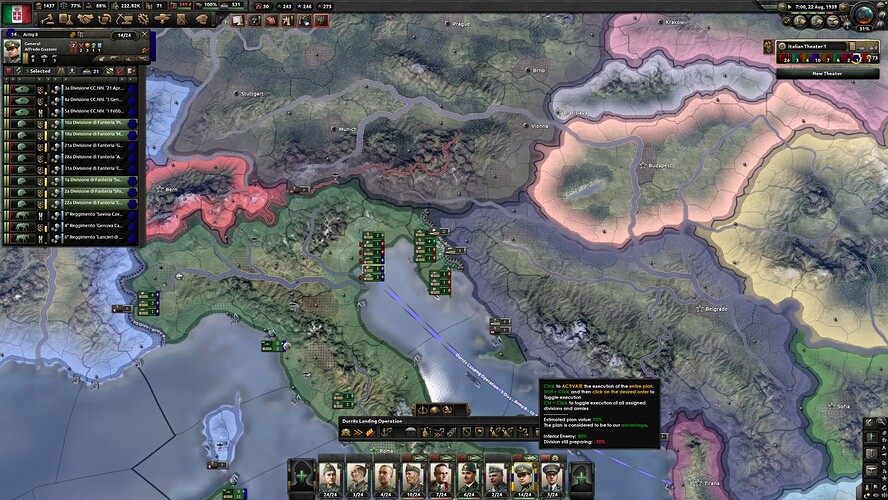 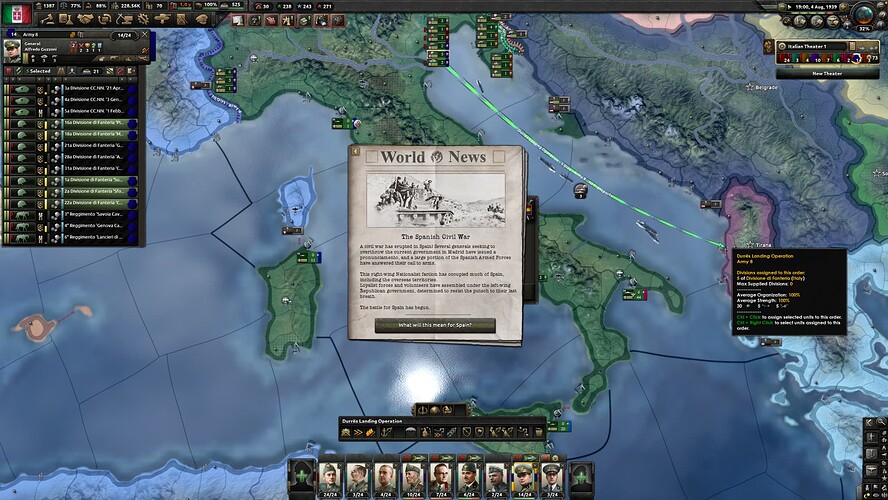 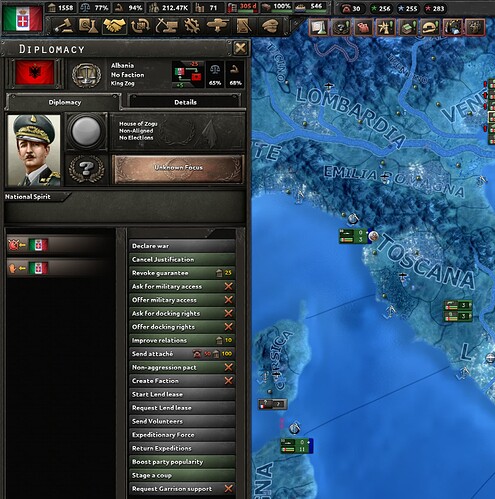 From the screenshots it doesn’t look like you’re at war yet. It appears you’re currently creating justification for the war (“Cancel Justifcation” as the second option on the right, with “Declare War” greyed out).

Once that action is completed, you should be able to declare war and head on in.

Ok, that’s what I thought.

How long does that take? I’ve let it run for a fair amount.

It does take quite a bit of time. It should show it somewhere on a tooltip. Maybe try hovering over one of those two icons in the diplomacy screen: 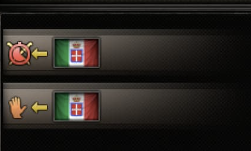