Hegemony III - It's not Total War, it's totally war

Glad to hear they are making progress.

Decided to jump back into some Hegemony III recently on a whim. Still as enjoyable, to me at least, as as ever. Predominantly, been playing through the Pyrrhus of Epirus campaign again and trying to rewrite history. Though, the Romans and their allies and no pushovers so it has taken some careful strategising to keep loses to a minimum, since Rome still has the manpower supply advantage. As fun as the various sandbox modes can be, personally I love the handcrafted narrative campaigns the most (e.g., Philip of Macedon and Pyrrhus of Epirus).

Started up a sandbox campaign as Syrakousai on the full Italy and Sicily map today and made a bunch of progress.

Time for a quick mod recommendation for anyone looking for some new content to spice up their game and to highlight some of the great mods out there.

Want a change from Italy? Then may I suggest the Iberia v0.6 mod that transports the sandbox game to the Iberian peninsula and introduces the Iberian tribes. Then for people with ‘The Eagle King’ DLC you can also subscribe to Iberia v0.6 Add-On on the workshop to get additional content, like two new scripted historical campaigns dedicated to following firstly the exploits of the Barcids in Iberia and secondly Scipio’s invasion and conquests during the second Punic War. 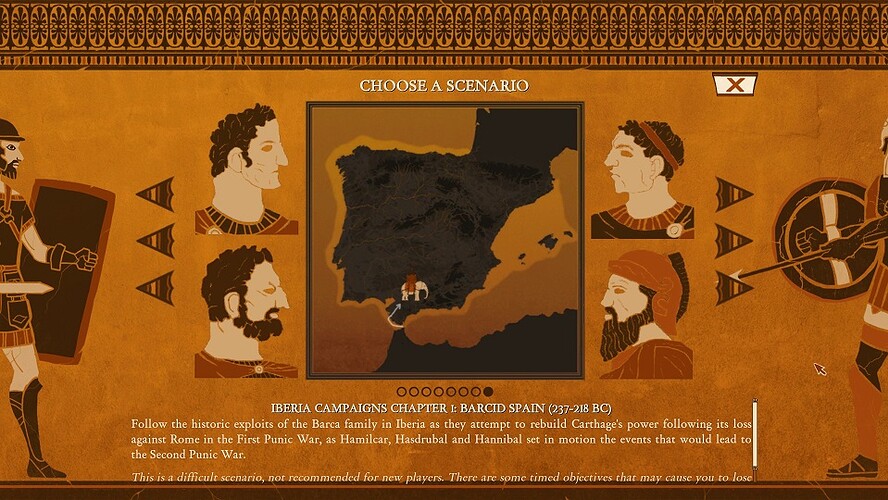 You have some serious gold income issues there… I mean >2000 gold a week, assuming no cheatcodes apply - HOW DID YOU DO THAT? It seems it has to do with you not having many camps/bridges etc. but how can you store enough food for winter then without all that storage capacity? You didn’t even feel the need to exploit the resources on the northern islands. Heck, I suddenly feel underoptimized, underpowered and really happy that this game has no multi-player :-)))

The magic of a +45% boost to tax output in every city? Although not sure how the tax output boost of the Level II Markets (+30%) and Syrakousai’s faction bonus (+15%) interact on a mathematical level, so the effective boost to tax output could be a different number. Not to mention I captured that many slaves that it’s rare that my resource buildings aren’t operating with a full 40\40 slave workforce. Plus I went pretty hard into the economic techs, outside of investing enough into military to unlock unit retraining, siege weapons, and the ability to recruit phalangites.

Though, having every city on Sicily be of my native faction, after some extensive colonisation, sure helps free up some gold income by allowing me to be very efficient with my deployment of garrisons\defensive forces. Would have thought that would be at least partially offset by the cost of building and maintaining a navy to keep Sicily safe from seaborne invasions safe though. Perhaps Syrakousai has the potential for some potent snowballing with gold income considering capturing two cities in Italy effectively shot my income from roughly +1400 back above +2000 despite how much I invested into my military.

Same advantage of having numerous native cities also applies for food consumption, a lot easier to keep city sentiment\happiness at, or above, 100 with native cities and can therefore play with the food consumption slider to minimise food consumption if required. Food storage is pretty easy to explain with good use of baggage trains, for a negligible rise in micromanagement demands in my experience. They are free to create and maintain, therefore unlimited excess food storage capacity, and can transport said food in bulk to other places if need be. So, the real challenge is just ensuring that food production stays ahead of food consumption as my cities continue to grow and expand over time.

As a result, on Sicily, if a fort\camp cannot help produce food with a fishery add-on then I am not interested in spending my income on it. Throw in a bunch of supply route optimisation to minimise bridge expenditure and hey-presto, more income to spend on other matters. Necessity is the mother of invention, as they say, and fighting an extensive large scale war with the Elymoi and Zancle definitely asked for learning how to free up as much gold as possible for good military units. Which has subsequently carried over into every decision afterwards since the Samnites, Rhegion, and any factions feeling opportunistic aren’t going to be a cheap war to wage across both land and sea.

I probably owe a lot to the Pyrrhus of Epirus campaign as well, for nothing teaches you efficiency quite like fighting constant stacks of very experienced Roman legions on a limited budget of manpower, income, and time. Since Carthage eventually comes along to stretch those demands even further with the Sicily effort.

I might have to try Hegemony again in the near future. I liked the first of the series but it just seemed so grindy and slow.

I might have to try Hegemony again in the near future. I liked the first of the series but it just seemed so grindy and slow.

I loved the original Hegemony: Philip of Macedon, subsequently culminating in Hegemony Gold: Ancient Wars of Greece and the conflicts between Sparta and Athens. Would concur that sometimes the pacing could become a bit bogged down though. Some of that can be of the player’s own doing, like chasing after non-required (Hegemony) objectives, and some of that due to game actions sometimes side-tracking me from my main goals.

Nothing screams multi-hour detour in the Philip of Macedon campaign quite like me eventually having to invade the Molossians (Epirus) to shut down their annual several unit-strong invasions. With their being no way to institute an allied AI-controlled client kingdom led by Alexander the Molossian, naturally invading Epirus led me to directly controlling said lands and subsequently conquering the lands north and south of Epirus to better secure borders. As I have better things to be spending my limited money on than paying for eternal truces, a rather different story if people will pay me for said eternal truces though. Not that the Illyrians to the north were often too keen on truces anyway, the only lesson they know is dying by my blade apparently.

Would be interesting to re-imagine the Philip of Macedon campaign within the Hegemony III engine with the gameplay improvements and scripting opportunities the newer engine brings to the table. Would open up numerous elegant scripting solutions for better replicating history and improving the pacing, for those people who do not want to spend dozens of hours painting all the map purple.

The game would still have a certain ebb-and-flow style of pacing to the gameplay, inherent to the nature of ancient warfare and how the game attempts to captures those realities. Yet you could certain improve the pacing of the campaigns themselves by, for example, not having me need to obliterate both the Thessalian League and the Tyrant of Pharae to become overlord of Thessaly. Historically, Philip II of Macedon’s subjugation of Thessaly did not see him smash everyone off of the map, like I did in the game’s version of events.

Not entirely sure how I would further improve the sandbox experience since like most games (e.g., Civilization and Total War) the best part is probably the early to middle of the game. Hence, why I love the more narrative-driven scripted campaign content since there’s more to drive you onwards than just the, often satisfying, core gameplay loop. I would imagine there are certain steps you could take to spice up the middle to late game experience though to provide some variety to the gameplay loop and challenges posed. Or possibly just improve the mid-to-late game pacing for reaching victory with improved deeper diplomacy and refined victory conditions.

Hegemony III definitely the peak of the series for me so far with the additions of city development and such made along the way to flesh out the experience. Plus mods, with Steam Workshop support for a usually hassle free installation experience.

Not the campaign, but the devs have a mod on the workshop that recreates the Hegemony 1 map in the Hegemony 3 engine as a sandbox.

Steam says the last time I played this was 2017 so I booted it up and immediately started having a blast playing it again. Such a good game.

Nearly two years after release and Longbow are still working on this game. A paid DLC has been released, but what caught my eye in particular is the fact the developers have released free DLC which recreates the original (and excellent) Hegemony: Philip of Macedon inside the Hegemony III engine.

Heh my last post in this thread was about the exact same thing back in… 2017 when I last played it.

Yeah, I checked that out when I saw it. It isn’t a full recreation of the Hegemony Gold map but rather a detailed chunk of essentially Macedonia with some parts of Thessaly and such included as well. Otherwise I would be very tempted to embark on an ambitious Philip of Macedon recreation mod project. I guess I still could given the mod tools, but then I’d have to track down where to get a good height map and the like.

On the plus side, such a map would have some good reuse value for other historical campaigns like Rome’s Macedonian Wars. So, if I ever have sufficient time maybe I’ll investigate recreating the map of ancient Greece.

Well, even with the map in place, it would still be hard to recreate the original Hegemony Gold feeling. Some essential parts would probably still missing (unless I misjudge the game’s modding capabilities):

Possible I’ve still missed something, but this is what comes to mind right now.

Apparently a sale is going on at GOG.COM with 75% discount for

Hegemony III: Clash of the Ancients

For more than two centuries, Rome has slowly expanded her control over the tribes of anci

Any reason to NOT buy this from GOG? Must-have Steam mods?

Uhm, most mods should also be available either from ModDB or from the developer’s site. Most…, but not all. There’s a list on the Wiki where you can see which mod is available where (steam, moddb, dev).

thanks. If I’m reading that right on my phone, then the majority are not available if you don’t have the Steam version.

Yeah, I’d say it’s about 50:50, the biggest mods should be available though. But I understand if you want to have the full experience :-)

So the demo of this is quite fun so far.

Is the Hegemony Gold game worth playing or does 3 “obsolete” it?

If it is worth playing, should it be played first?

Both games are sufficiently different. HGold is set in Greece and the main campaign follows Philip of Macedon, H3 is set in early Italy and the focus is on the sandbox where you can play any faction there (doesn’t need to be Rome), unless you also buy the Eagle King DLC which features a campaign for Pyrrhus of Epirus in the spirit of the Philip campaign. H3 got many mechanical upgrades over HGold, but also lost some features of HGold - you’ll still notice its a hegemony game but in the end it just feels different - differently great :-) The order of play doesn’t really matter imho.

Thanks. Actually double thanks as your reply made me realize I was playing Gold & not 3. Duh.