Help Me Figure Out My Home Ethernet

Okay, this has driven me crazy for a long time.

All the rooms in my house have Ethernet ports, but they don’t work.

It appears the original owners had some kind of ADSL line back in the day, and had the house networked.

You can find this in the garage. 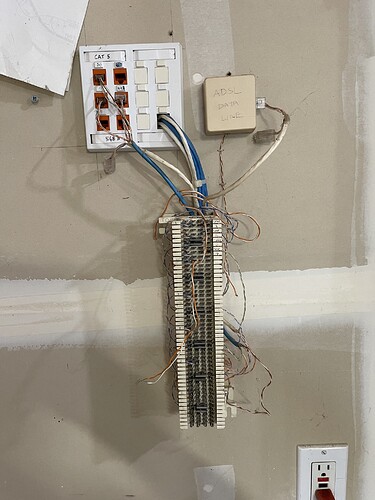 On the left side you can clearly see the Ethernet ports leading to all the various rooms.

What do I need to do to make them work? Connect them to a network switch?

The current wires running in to the ports on the left appear to be 4 wires each, which sounds more like telephone. Not sure what’s going on. Also what’s up with the bundle of wires coming through on the right?

In any case I’d test the room ethernet port to the garage with a tester to make sure it’s wired up the way you think it is. You can get something fancy that tests quality or just something simple like this for continuity:

Edit: I don’t know why that won’t onebox.

None of that should matter if the labeling is correct. All that wiring coming from the punch down block is likely for a POTS setup. My house was wired similarly and I just swapped it out with a switch. However my cabling was 5 and not 5e so I am lucky to get 10Mbps.

If it’s actually cat 5 (hopefully 5e) and wired with the 586b as labeled then a switch is all you need. Plug your internet into the switch. Then patch cables going from the switch to the block labeled cat5.

Oh, and there is a chance they only hooked up 4 wires inside the wall jacks on one or both sides. If that’s the case, like it was for me, then you have to redo it with 586a or 586b. But since you are already labeled with one of the variants hopefully you are good.

I’m thinking it’s Cat 5, mainly because the house was built about 25 years ago.

Use those wires to pull cat 6. Unless it was done when the walls were off, then they’ll probably be stapled onto a stud every so often

You can always test just 1 line. Then if it works, invest in the switch.

Or just use wifi. :P

Use those wires to pull cat 6.

What’s in that picture makes my old telco self weep tears of blood.

Also, it’s entirely possible that big bundle would be what’s actually going to any RJ45 jacks on wall plates throughout your house. Those terrible, bad, no good, WTF were they thinking? discrete ports, if they’re for ADSL, would IIRC be going to RJ11.

Use those wires to pull cat 6. Unless it was done when the walls were off, then they’ll probably be stapled onto a stud every so often

I’m pretty sure it was done when the walls were off :/

It was for me, I use it for rock solid streaming to multiple devices around the house and as a backhaul for remote Unifi Wifi APs as well. Shit load better than mesh.

I would always rather have classic ethernet speeds rather than almost but not entirely reliable wifi. I do want to upgrade to cat 6 but I am nervous about pulling cable. What I have now works and I was not waiting on downloads for anything other than my desktop and games, so I ran cat 6 directly to it since I could cut through the garage.

Worst case you are out $20 for a cheap 8 port ethernet switch.

You can always pull one from a jack in a random room and see how much play you get. Usually they’ll be attached right at the jacks so if it doesn’t go anywhere then you’ll know right away.

I also have no idea what that long thing in the middle is.

A 66 block is a type of punchdown block used to connect sets of wires in a telephone system. They have been manufactured in three sizes, A, B, and M. A and B have six clips in each row while M has only 4. The A blocks have the rows spaced farther apart and have been obsolete for many years. The B style is used mainly in distribution panels where several destinations (often 1A2 key telephones) need to connect to the same source. The M blocks are often used to connect a single instrument to such a ...

Yeah, pull out the jacks in a couple of rooms and check what wiring is connected to the keystones, and what wiring standard. Learn what 2-wire or 4-wire phone looks like vs 4-wire ethernet vs 8-wire ethernet. And you can check the cable jacket into the jack and check if it’s cat5 or whatever.

A cheap RJ11/RJ45 ethernet tester may be useful, but look for a “toner” if you need to trace which wires connect to what.

I’m pretty sure it was done when the walls were off :/

You can still do it, in theory. They are just in the drywall. What you want to do, I theorize, is open the jacks up off the walls with a flat head screwdriver (most likely), and snip the cables at both ends. Tie a spool of Cat6 cable to the end of the one, and pull it through until you have pulled the old garbage cable and left a trail of Cat6 running from point to point. Then cut and crimp them to all new wall jacks. Get yourself a decent network switch, and configure the ports and patch from the wall jack over to the ports, and you’ve got a good home network. In theory - I don’t know if this would work, but I think it would.

My own house was wired similarly - but it was run like garbage, with no thought to running unshielded network cables across power and the interference coupled with super cheap patch paneling at the termination point just completely useless, so I just run cable through the ceiling where I want physical.