I’m not talking about the infamous tubgirl, or the even nastier goatse.cx. (If you haven’t seen either, consider yourself lucky.)

No, I’m looking for another picture. I ran across it about half a year ago on some site that had a test, some kind of “Do you think this is gross?”-test. It was a large site, with lots of various tests, but I can’t recall which site it was.

The picture is a close-up shot of some guys teeth and gums. At the base of his teeth, wedged between his teeth and gums are several thick nesting maggots, apparently fly larvae. It is gross. Very gross.
In the picture byline, or something like it, it said that this picture was taken in a Palestinian clinic where this man walked in after having fallen asleep outside. It didn’t say for how long he slept, but I guessed that the guy was an addict of some kind and had been out for quite some time.

I’ve tried to look in all the usual places. Could someone please help me find this picture again? 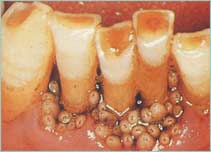 Alternately, you can just take a screen grab of one of the fifty different “diseased toe” banners that have been appearing on Qt3 of late. Good god, those things turn my stomach. And recently, it seems like there’s about a 50% chance of getting one every time I load a page.

I agree with the toe fungus things. disgusting

You guys need the Firefox tool “RIP” (Remove It Permanently)

I did away with QT3 banners a while ago.

Note to Tom: This is a lie, I look at every banner very carefully.

I’ve seen a picture of a guy with his gums infested with big maggots, and it’s not the one from the BBC. Unfortunately I can’t find it.

Nice, but it needs to have more of a ring to it, like Brawl Hall. But, since that’s taken, I have a few suggestions with help from conflictNo, an old pal (McMaster may recall these, some were posted on PH) back when we were trying to come up with a name for caltrops. Take your pick, I think they’re all still available!

And my personal favorite:

I mean, that about sums things up, I think.

Could you now help me get this egg off my face… :)

Of all the combinations I googled for, I didn’t try that one. Embarrassing. :oops:

It’s the right picture, and the site was the bbc site. Thanks!

You guys need the Firefox tool “RIP” (Remove It Permanently)

I did away with QT3 banners a while ago.

Note to Tom: This is a lie, I look at every banner very carefully.

I specially ask Adblock to click through qt3 ads for me!

What kind of world have we created when you feel the need to wipe egg off your face for not thinking to Google for “maggot teeth”?

Goddammit! If there’s one thing that sets me off, it’s an incorrect spelling of “whupass!” Whoop is a crane, it’s a yell, it is NOT kicking ass. Whup is short for “whuppin’” as in, “I’m gonna take my belt off and give you a WHUPpin’!”

Broken windows theory, as applied to the EE forum.

The other night while playing DoD:S I came across some of those player spray paint pictures and of course it was a lovely pic from Stileproject.

Broken windows theory, as applied to the EE forum.

I thought I understood the broken windows theory from the last time someone mentioned it here, but it’s late and my brain hurts, can you explain what you mean?

When a neighborhood shows visible signs of decay, such as broken windows that don’t get repaired, the decent people think “we can’t live here anymore” and move out. Housing prices start falling, and the neighborhood eventually turns into a ghetto of crime and poverty. At least that’s how I remember it.

Whoa, see that’s completely different from what I was thinking. Was it broken window fallacy? Is that what I’m thinking? Where someone breaks a window, and through all the work that is generated because of it for repairs and stuff people end up believing the broken window was actually a good thing.

Oh yeah, I’ve heard about that one, too. But I think the neighborhood decay version is much more applicable to this thread than the glazier economics version. At least I don’t see how anyone would profit, or think to profit, from Whittalinks. :P

I can do you a great deal on Choggle pants. Limited time only, two for the price of one.

Wholly- You are correct, that’s the fallacy. The theory is more or less as Christopher described.