A couple of comments:

@CraigM, explorers are selected at random from your pool during the New World Phase, so you may be stuck with the inferior Willoughby instead of Chancellor or Rut. The only exception to this is Sebastian Cabot, because he gets brought in by event specifically (so I have both Cabot and a random explorer from the Spanish pool).

@Panzeh, the French only roll one die on the Chateaux table, not two. You rolled a 6 on the first die (and have +2 from Milan), and so the result would be the same (8+), but wanted to point that out for future reference (Section 21.4 in the rules).

Generally, if people do not mind, I think it is a lot easier to follow if people say what they are doing in the chat on the move files–sometime it can be hard to figure out where the CPs are going, and it helps make it easier to make sure everyone is playing right. 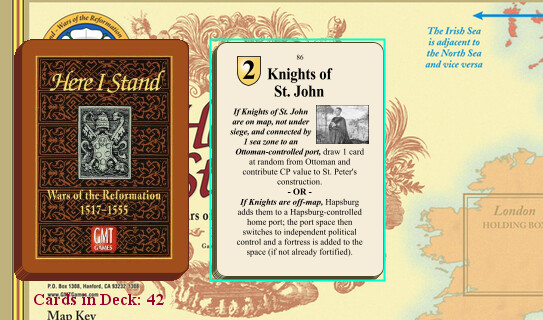 Editor’s Note: I hope the Protestants take that out of the discard and convert like seventeen spaces with it that was my best card grrrrrrrrr

that was my best card grrrrrrrrr

But, seriously, damn. I know that feeling.

So if the 5CP are added, it’s the Protestants’ turn. @Tom_Mc

I didn’t move your marker, FYI, I wasn’t sure if I could.

Yeah so the card is in the Papal hand there. It doesn’t look like it really needs to stop there but we probably should have the Papacy now play it for cp and dump them all in St Peters.

card played and CP moved. Over to @Tom_Mc

I was thinking about not using the Press but I went ahead and did anyway. Three more cities join the Protestants. Erfurt, Hamburg, and Bremen. File has been uploaded. 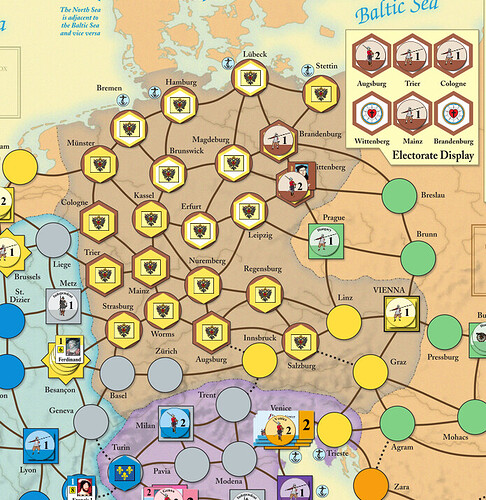 Well, at least SOMEONE got some use out of it.

Charles V, using his august status as Emperor of the Romans, joins Ferdinand in Besancon. The pair recruit a regiment of regulars (2CPs) and hire two of mercenaries (2CPs), and then march with 6 regiments (4 regulars, 2 Mercs) into Metz (1CP), placing the independent city under siege. 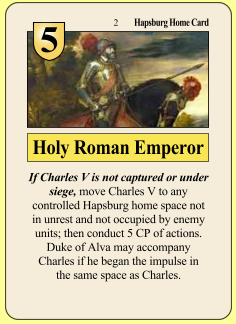 Very well. I shall return this visiting Saxon noble to her betrothed, and play Katherina Bora for 3CP

First I will assault Edinburgh. Rolls for attacker are simple. How do we want to handle the defender single die roll? @CF_Kane @Panzeh ?

I think you can roll the single die for the defender, as long as @Panzeh concurs (since he controls the Scots). I would propose that we each roll for independent keys we assault as well.

While pending Panzeh, I am thinking of my remaining actions (assuming successful assault). Given I would only have 2CP, colonize is out. Most of what I can do is either build troops, move troops, or build ships as I have already sent an explorer this turn.

Given that I am considering building ships. Generally speaking it seems they can transport troops or take place in sea battles. However I can also loan ships, which would be the reason to build more currently. That way if, say, Spanish shipping was imperiled I could, for an appropriate fee, send them some squadrons.

Is that generally accurate? Is there another use of navy squads I missed in my rules reading? Because if my intent is not to get directly involved in continental martial affairs, as it is currently, then being England navy for hire, seems like a more useful action than pushing little men around the board.

So that Scottish naval squadron is a problem.

Requirements:
• The active power must have placed the space under siege during a previous impulse. Fortified spaces that are empty also
have to be put under siege in one impulse before they can be
assaulted in a later impulse. (Exception: The card Roxelana
allows the Ottoman player to assault a fortified space in the
same impulse that the siege is initiated).
• The assaulting power has an LOC to the space.
• The power that controls the fortified space does not have a
naval squadron in an adjacent sea zone.
• If the power that controls the fortified space has naval
squadron(s) in that space, there is a greater number of squadrons from the assaulting power in adjacent sea zone(s)

I think you’ll need to move squadrons into the North Sea to be allowed to initiate the assault. I mostly remember things like this because they are very important in French-English wars. So if you’re looking for other things to do with those CPs might I suggest a naval move.

I think you can roll the single die for the defender, as long as @Panzeh concurs (since he controls the Scots). I would propose that we each roll for independent keys we assault as well.

Go ahead and roll for me. In the context of independent keys and undefended keys, i would go with this. Otherwise, i would allow the opponent to decide on response cards before rolling.

So that Scottish naval squadron is a problem.

This is an excellent point, and something to consider.

Also, noting this because it differs from land movement, a naval move activates all your boats on the map to move one space.

Also, building ships and mercenaries is useful, as they are often essential to make other agreements work.

Hmm I had misread that bit and only saw the part about adjacent sea zones.

That does rather simplify what my other two CP are then.

Also, building ships and mercenaries is useful, as they are often essential to make other agreements work.

Sure, but in this case it becomes irrelevant because I had misread the criteria about naval units in dock. So I have to spend 2 CP to allow it.

Anyhow the assault is successful. Not sure what happens to the Scottish squadron now.

@Panzeh file is uploaded for you

Also sorry for the questions and confusion. I did try and make sure to be following the rules on it, but clearly missed some things.

It will happen to all of us—there are a lot of rules, and it is easy to miss something.