Hey everybody. I’m seeking recommendations for a mid-range Stusserbeast to be purchased this holiday season.

Background:
For years, I’ve built computers for my best friend and his family. This has worked out well, both for me and for him, since it has (on one or more occasions) given me the excuse that “well, he needs a new video card, so I might as well get one, too, just to be sure that I can help diagnose any problems he might have.” I’m sure there are others on the forum who have similar experiences. We typically see these friends 2x a year, so new PCs or upgrades happen on those occasions if needed. This year, due to the pandemic, we won’t be seeing these friends. Layered on top of that, my friend’s daughter – now 19 – has asked her parents for a gaming desktop. Normally, I’d build something and deliver it over Thanksgiving, but since we won’t see them this year, my friend has asked me to recommend a pre-built.

The Need:
This PC is going to be used primarily for gaming (she already has a laptop for school, but it’s an older Surfacebook with the integrated GPU, so not so hot for gaming). Initially, that will likely be mostly shooters (Overwatch/Apex/Fortnite), and my anticipation is that it’ll be at 1080p, at least for now.

The total budget – PC, monitor, keyboard/mouse, etc. – is likely in the $900-$1100 range. One of the key factors is future upgradability; I’d like to be able to get her outfitted with something that will meet her needs for now but could take a future mid-range GPU, SSD, and RAM upgrade without requiring a new motherboard or PSU.

I am looking for recommendations both on potential vendors and any hardware recommendations (both stuff to look for and stuff to avoid!) My default on those rare occasions when I’m buying machines has been to just get a Dell (since they at least used to be about as generic as you can get, meaning easy to swap stuff out), but it’s been quite a while since I’ve bought one and don’t know if they skimp on the PSU, or do custom motherboards, or any of the other stuff that causes no end of headaches down the line. I’m not wedded to Intel or AMD for the CPU, but do want an Nvidia GPU due to past driver-related AMD trauma.

Help me Qt3-kenobi: you’re my only hope!

You could cheap out and go with a 3600 CPU if you need to buy right now.

My gut feel is to focus on the sales. When looking for a sub $1000 gaming PC the big question is going to be: “Who is trying to clean out stock on last gen Ryzens and last-gen 20XX cards cheap?”

I picked this up for my son a bit over a month ago because it was on sale for like $800 at the time and I felt that was a reasonable price for a capable 1080P gaming system.

Although that was a good deal you should still feel bad about those fans :)

Although that was a good deal you should still feel bad about those fans :)

I’m not the one who has to use it!

That’s really good advice, finding some sale on a prebuilt AMD 3600 with a 2060 Super or something. 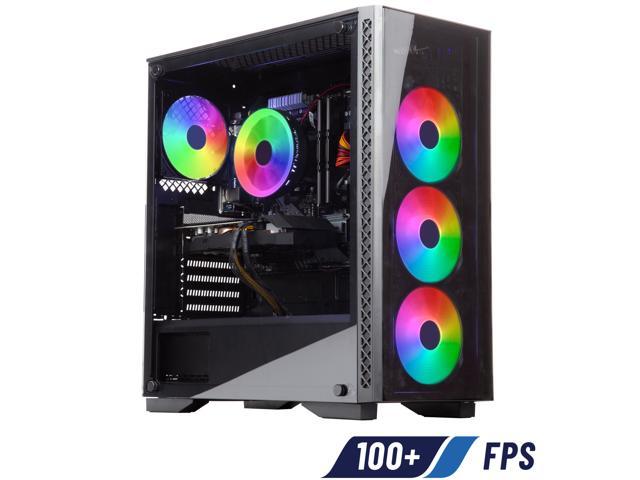 Microcenter has those as well and a bit cheaper:

They had a much better selection a few weeks ago, looks like they are getting snatched up. Though I only checked the 2 in GA so YMMV.

These are awesome suggestions. Thank you all!

The microcenter looks great too. 2060 non-super isn’t fantastic, but it’s fine for 1080p and you can upgrade the GPU in a year or two if necessary.

The Ryzen 5 3600 would be on a Zen 2 motherboard, right? So it, too, could likely be upgraded in the future to one of the more recent Zen 3 CPUs?

It’s a little crazy that putting this machine together on pcpartpicker is basically the same price as buying it prebuilt!

Yes, but some of the OEM motherboards are tricky so I wouldn’t bet on it without researching first.

I bought a Stusserbeast during the First Round back in like…2008? 2009? It was awesome!

I’d like to play Cyberpunk 2077 at 60fps at High settings, and be able to play the next-gen console games as well, at 1080p and ~High settings.

I really don’t like figuring out all the details; that’s why the StusserBeast was so good for me!! With that in mind, I just found an AMD entry level gaming build at PCpartpicker that looks pretty good to me. It’s < $600, which is just about right.

If anyone has any thoughts for something in that price range, I’m all ears!

1050Ti to 1650 isn’t much of an upgrade to be worth getting a whole new system (like 20% better fps I think?), and neither is that CPU upgrade, at least for gaming specifically where single threaded performance counts most.

If you want to stay in that price range (<450) I would buy a system with a better CPU (3600) but no GPU and then use your existing GPU until you upgrade later, or do the reverse and buy a better GPU now and put it in your existing system, and then purchase a better desktop/cpu later. I think the best bang for the buck is the 1660Ti or Super, at least on the NVIDIA side.

Awesome suggestions, thank you! I’ve just discussed with the wife and it’ll be a few months until I have any money. :)

You’ll hear from me more, soon!

FWIW my guess is Cyberpunk would get a big boost from a better GPU even in your older system, because it also has to run on the Xbox One and PS4 which have terrible CPUs. Other games may be CPU bottlenecked though.

I agree with most of what Quaro said especially with the prebuilt systems. They’re going to be more bang for your buck with the biggest risk for them being cheap cases and low powered PSUs. It’s still almost impossible to build what they offer at the prices they offer.

Upgrading to a new GPU, maybe even a used one once everyone shifts over to the bigger flagships, will be easy and a lot more affordable later.

Given your price constraints I would keep your existing system and add a RTX3070/RX6800 or RTX3060/6700. The latter aren’t even announced yet but should be around Q1.

the brand is a bit sketchier

I am curious why you said this @Quaro. This looks like a good value and I am considering buying it as I bought one of their machines but that was over 10 years ago. Has something happened to the company that I should know about?

The rumor on the street is they have problems with back ordered parts, so your system can be long, long delayed while they sell you something they don’t have and can’t actually get quickly. Occasionally machines arrive DOA, but I am under the impression this is often due to their packing, as in some parts can become loose or someone over there was just too lazy to hookup the fans properly. If someone doesn’t know how to check for that, and a lot wouldn’t because, I mean, they’re having someone else build the thing, this can be quite frustrating which leads to their other biggest problem, not the best customer service. All the problems above could be solved if their customer service was okay.

… but this can happen with Dell too. The last time I worked with them for my Alienware laptop, it was nightmare. I wouldn’t give them one dollar for their premium service after that.

Part of the reason I build my system despite not always wanting to deal with it is I know every part that’s going into it, and I don’t have to deal with some kid on the other line lying to me over and over again.

I am under the impression that the problems above are with the custom built rigs though not the prebuilts found on other sites.

I wish EVGA would build machines.

Dell and Lenovo are just a tier higher in terms of reliability and parts, especially for pre-configured system templates that you don’t customize. But as long as you buy from a store that makes it easy to return like Amazon or BestBuy I think they are fine, just give the system a good check in the return period and make sure everything is running well, temperatures aren’t crazy, etc. Typically any problems are there from the start and you should find them right away if you look.

If you live next to a BestBuy where you can just drive over and swap the system if anything is wrong, that’s probably the best case scenario.

Note that the $670 price tag is no longer available, you’ll have to find a similar deal.