How many times will you buy the next Trackmania?

I wonder if they’re trying to phrase it a different way in order to skirt around certain laws (tax or otherwise) somewhere out in the world that would apply to subscription services but not whatever it is they’re pretending to do.

Edit: Ooh, and a bonus. If you subscribe two months in a row they can claim they’ve sold two units.

“the action of making or agreeing to make an advance payment in order to receive or participate in something.”

Before Trackmania was on Steam, it was a mess to get it working because of the crazy paranoid DRM schemes that were in place. Not surprised about the continued denial of their customer’s dignity.
I hope people got to enjoy the game for the couple of years it was playable without having to bend over!

Pepperidge Farm remembers. When it was Nadeo and had StarForce.

I could never get into this series. There are far too many right angles contained in the tracks when compared to every other racing game ever. For example: 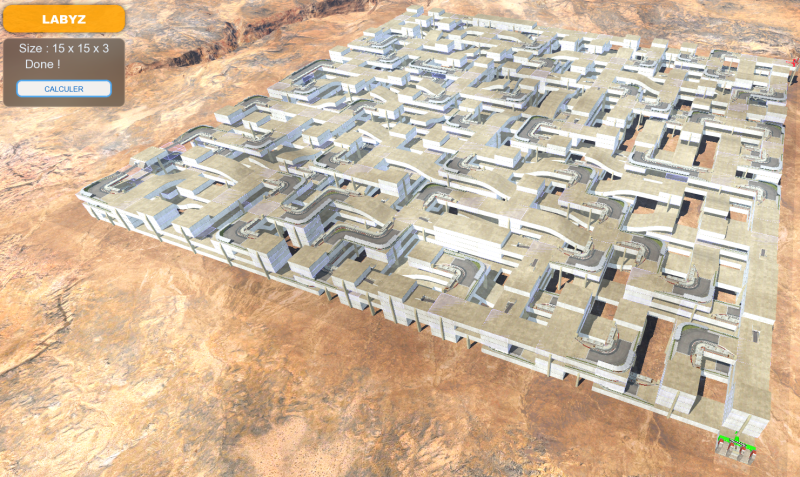 Splines on the other hand were designed to be relatively easy to use, yet the devs haven’t discovered them.

I can’t imagine posting that screenshot as a negative example. That shit is why Trackmania rules.

If only they were as obtuse about those as they are about their subscription model.

I’ll just play the one they gave away on Playstation Plus if I ever feel the need. That’s crazy talk.

Yeah, my kids and I love Trackmania because you can complete a race in about 90 seconds, but I’d never in a million years pay a subscription for it.

I have never played Trackmania and thought “I wish this had an iRacing-style subscription model.”

Yes it is subscription. And it's not the point. Read: tl.gd/n_1sr8s8e

To save everybody a lot of time: the point is that

I have worn the letters off the WASD keys on multiple keyboards playing Trackmania. I bought Canyon, Stadium and Valley when they came out, but I skipped the last one. I still have TMNF installed on two computers though.

I will be buying the new one 0 times from the looks of it.

If you’ve never played it, go download the free version TrackMania Nations Forever and give it a try. You’ll need a patch to get it running on Win10

Hotwheels. On your computer.

I still have TMNF installed on two computers though.

Hotwheels. On your computer.

There already is a Hotwheels game.

I wonder how much physics was cheated. 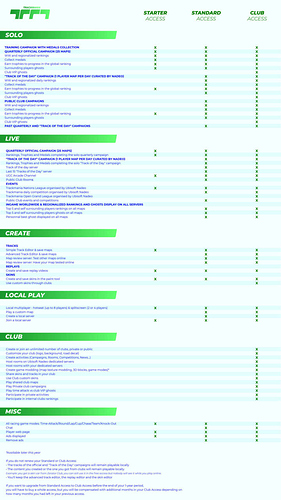 Jeeeezus. If you’re pitching a 50 point feature matrix for your video game subscription tiers, you fucked up somewhere.

This is Nadeo we’re talking about. If they didn’t have a 50-point feature matrix I’d be disappointed.

I don’t think they marketed this at all well (typical Nadeo). After looking into it a bit I realized you get 100 official maps + 365 tracks (1 per day) per year for 10 USD (that you keep forever after your subscription expires) which is very reasonable. It’s also a non-repeating subscription so you manually pay for a year and then will have to manually renew it when it expires.

First impressions:
I like the new flat look, it’s very clean and neat. Physics are awesome as always. I even like the soundtrack. I mean they’ve been remaking the same game since, what 2003 so they should be pretty good at it by now. It’s more Trackmania. If you enjoyed the others then you’ll enjoy this too.

Here’s the community version of the earlier matrix: 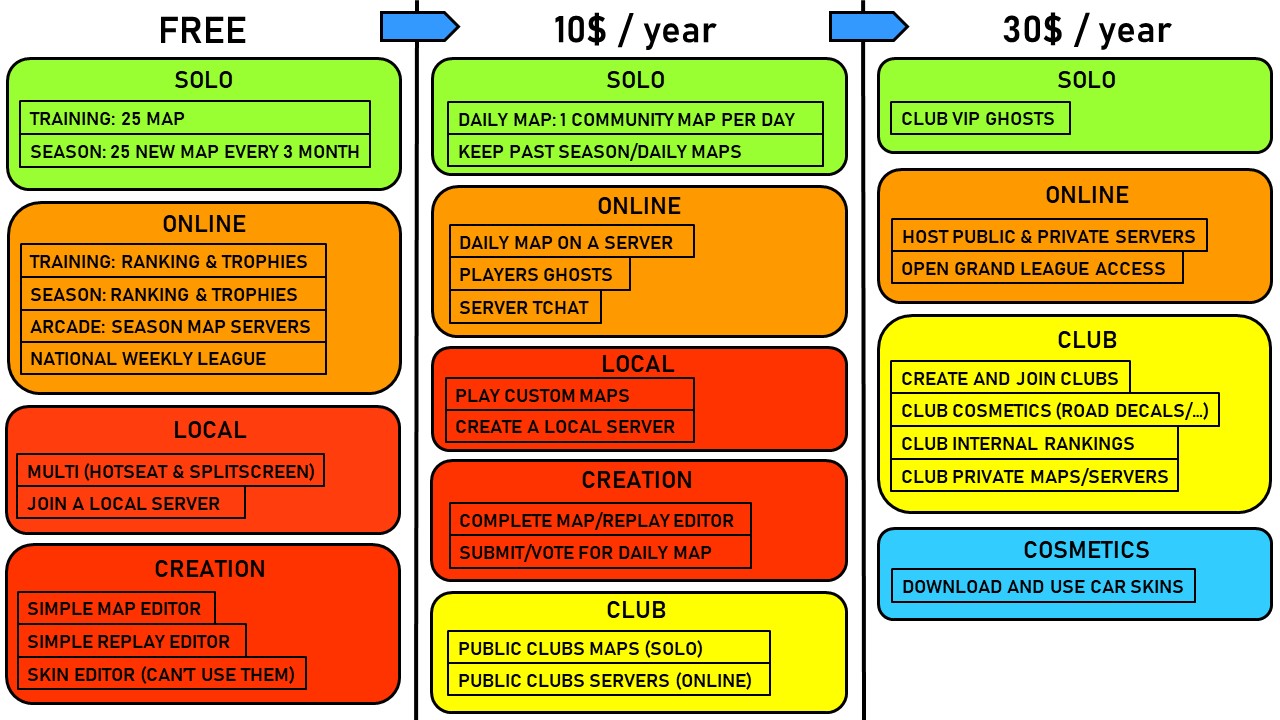 Jeff on GiantBomb said the game itself is the best yet, but the front end is atrocious.