I am happy! Nimbatus has also been on my wishlist for awhile.

Paradise Killer is a fascinating game and an award winner from last year. It didn’t end up grabbing me, but I also think I played it totally wrong by exploring everywhere before diving very deeply into the characters and mystery.

As usual, the big ticket games are YAWN for me.

Paradise Killer is likely the best game in the bundle. I already own it, so that’s not a deal for me, but Yakuza 3, Surge 2, Nimbatus? That’s enough for me. Some of the others look interesting as well. ADOM is definitely a good one, but again, own it.

Buying for paradise killer and a few other indies.

It’s really hard to justify spending $12 on this thing when the topline games are all of no interest and the one I want most is ADOM which is hiding down there in the far right of the third row. I guess that’s a somewhat regretful pause.

Paused so hard it could be heard in the next town over.

Seriously, the headliners are a Yakuza game that has been $10 recently and Surge 2, which is available for $3.33 as part of a 3-title $9.99 Build Your Own Platinum Bundle over at Fanatical. In fact, that Fanatical bundle for $9.99 is a better deal this month than the Humble Choice at $12.

Hammerting does look interesting, and I hear good things, but it’s also the kind of game I can wait on to see if it pops up paired with more interesting titles in another bundle somewhere down the road.

It’s really hard to justify spending $12 on this thing when the topline games are all of no interest and the one I want most is ADOM which is hiding down there in the far right of the third row. I guess that’s a somewhat regretful pause.

Obviously not worth it only for ADOM, but I don’t know what the position of it on the list has to do with anything. Again, I can pretty much rely on the second and third rows having the stuff I care about.

Paradise Killer was a bitter disappointment for me, given how much the few others who played it liked it. Be really curious to see what kind of a reception it gets from a bigger audience.

Has anyone tried Elderborn? The description sounded very intriguing. 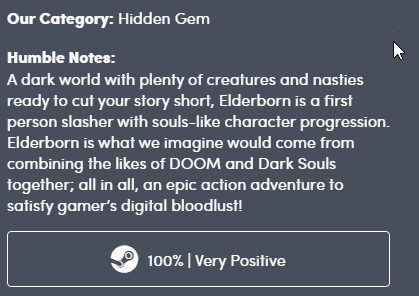 Has anyone tried Elderborn? The description sounded very intriguing.

That sounds incredibly generic to me, but hey, YMMV.

Elderborn is a lot of fun, and I typically hate Souls-style games.

Well, I basically play anything that gets compared to Dark Souls, because I’m just a huge fan of that whole sub-genre now. It came out of nowhere and knocked me upside the head.

ADOM is a wonderful traditional roguelike.

If you’re interested in the game, but don’t care for this bundle maybe buy it directly from Steam or GOG. That way Thomas Biskup and Co. will get more than a few pennies from Humble/IGN.

Yeah, having the first three headliners all be currently on Game Pass makes for a bit of an underwhelming bundle. Kind of interested in Paradise Killer, but don’t know if there’s anything else I would get around to here.

Too bad all the big games are on the pass and things I’m unlikely to play twice. I’ll probably still buy it though, for no rush to finish those. Kill it with fire and paradise killer were on my wishlist.

Dirt 5 looks really pretty with HDR. The night races under fireworks were great. Don’t go in expecting it to be like earlier diets. This one is more like motorstorm and gravel

If you’re interested in the game, but don’t care for this bundle maybe buy it directly from Steam or GOG. That way Thomas Biskup and Co. will get more than a few pennies from Humble/IGN.

Yeah, this is the other thing that’s stopping me from picking up the bundle. It’s fairly clear the “top tier” stuff gets the lion’s share of the cash and I truly don’t care about any of those games. So not only are the pickings slim, but the couple of small indie games of interest would really benefit more from a “proper purchase” even at a steep sale.

None of this is particularly calling my name. I have Yakuza 0 but have hardly played it. In contrast I’ve played quite a bit of Yakuza Like a Dragon on Game Pass and plan to finish it. I guess the turn based combat is the thing I’m liking, plus the goofiness of Ichiban as the main character.

The Surge 2 and DIRT 5 I could take or leave. I played a bit of the latter on Game Pass and it just felt like it had no soul at all, that it was more or less “extruded.” Elderborn looks like it could be interesting, and ADOM too for old school play. Paradise Killer’s art style kinda turns me off, honestly, although the game sounds intriguing if I didn’t have a bazillion games either owned or on Game Pass that I’d play before that one.

So probably another Pause.

It’s probably the difference between all the ratings vs steam- bought reviews.

It’s probably the difference between all the ratings vs steam- bought reviews.

No, not in this case. Rating for all purchases shows as 83% for me (82% for steam purchases and 92% for not purchased on steam).