Part of why I didn’t mind playing through Borderlands 2 so many times was that most of the dialogue took place over your radio, with very little actually happening “in-world”. It kept the game moving at a good clip, and you could always be moving along to the next thing. Borderlands 3 has tons of dialogue and character interactions that you need to sit and watch because you’re waiting on those characters to do something for you like open a door or reach a destination or whatever.

It grinds the whole game to a halt, and it happens all the time.

I’m very interested in Per Aspera but there’s really nothing else here for me. In particular, I already have and don’t particularly like Borderlands 3.

Hard to justify buying the bundle for just Per Aspera, though even on sale it’s still $15 on Steam so I’m conflicted.

That means it plays as a pretty great modern FPS, great shooting, you can slide, you can vault up some walls, the guns are “better”.

BL2 is a better game, the base BL3 you finish in spite of the story, not because of it, but the DLC is pretty good, at least the ones I’ve played, all good in their own way, I think the one I prefer is the Cowboy one, because of the Narrator gimmick.

I gather the writing is not as good as before because of the previous main writer leaving Gearbox due to some dispute or other, but what is so great about Borderlands 3 gameplay-wise?

An improved version of the same.

So it was a good month, as we expected, to accompany their new storefront app (at this point I’m not only collecting games, but storefronts!). BL3, Per Aspera, I heard interesting things of Black Book, I don’t know Everhood but the reviews are very positive, Before we leave looks decent.

I wonder what the “Before we leave” is referring to here. It’s a City management sim that takes place before everyone leaves the planet? So a very temporary colony?

One of my friends put Everhood in their top five games for 2021, but it was also in a Fanatical build-your-own-bundle very recently, so I already have it.

I got an email about the new Humble app, so went to install that.

By default, it wanted to put the program files themselves in my User/Appdata folder? So I tried to install it to a different spot and… the install is totally haywire, including an error with the uninstaller so…

WARNING! You might want to hold off on the new Humble App!

Update: Couldn’t uninstall it, so I just tried reinstalling. This time I selected to install it for all users instead of just my user (I’m the only one who uses my computer, so I just went with the latter as it was the default). That installed fine and in a normal default location (Program Files) and now the app works! Best case I probably just have some stray files hanging around in random places.

The app offers five games from the Humble Games Collection (if you’re a Choice subscriber, anyway):

All very worthy games, though I already own most of these (and Unsighted is currently on Game Pass), but it’s awesome to get to try Dodgeball Academia, which was on some GOTY lists!

Steam/EGS/GOG depending on the game. For now. Could easily see them testing their luck on moving everything to the Humble app down the road - which we all know would be a huge mistake. But do the people who want to drive “engagement” and “customer capture” know that?

For the Trove games?

Oh nice. I always forget about the Trove games. That’s a good reason, I figure.

Right, yes, now EGS and GOG keys might be a thing as well. But I sure don’t want to have to install their probably half-baked app to get my bundled games.

I’ve got ten of them already! Why stop now?

It looks like the Humble Trove is now only accessible through the app, as are those free “Humble Games Collection” games which are major Humble-published games basically added to the Trove (maybe temporarily?). Humble Choice games are still Steam keys.

Odd, I got an email saying that my annual membership to choice has reduced in price so I am going to get refunded the difference. Then when I went to select my games for this month’s bundle (wanting to play Borderlands 3 so a good deal for me), it happily announced after I picked them that they just charged my credit card.

So I am guessing annual memberships are gone and I get pro-rata refunded based on months left? I can’t find any info about this anywhere.

They are doing a ‘gamepass’. If you have an active subscription, in addition of the previous Trove, they will offer x games to be played for a period of time. This is the first batch 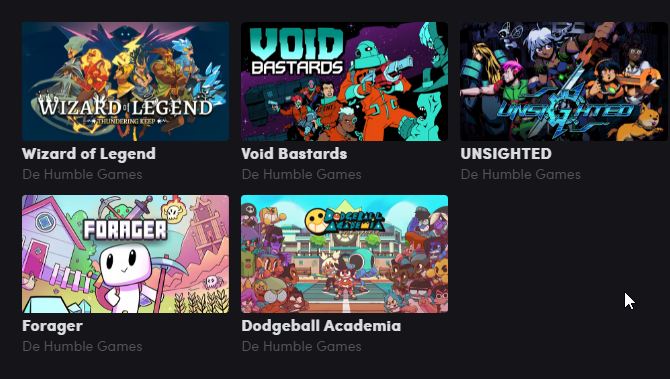 I’m done with getting Humble Bundles for the base game of something. By the time I get around to playing them, there’s a complete edition with all the DLC that’s usually cheaper or around the same price that I end up rebuying anyways.

I got an email from Humble about some kind of partial refund for my current annual sub, but I don’t know how much. Since I’ve been pausing most of the time now, I’m going to switch my annual to monthly so I can get those oh please don’t pause discounts.

I wouldn’t be surprised if part of their move from pausing to full on skipping is to remove those coupons since you’re losing out on higher discount tiers when you skip a month now.

So I am guessing annual memberships are gone and I get pro-rata refunded based on months left? I can’t find any info about this anywhere.

There was an email that went out last month with their blog post announcing, plus an FAQ:

All information below is from the pre-announcement for the February 2022 Choice update. Looking for the most recent Humble Choice FAQ? Visit here! Humble Choice Information:What is changing wit...

You’ll be receiving the difference between what you paid and the new rate. There’s still an annual membership available at $130/yr.

I wouldn’t be surprised if part of their move from pausing to full on skipping is to remove those coupons since you’re losing out on higher discount tiers when you skip a month now.

I was wondering about that too. I’ve seen a couple of comments on reddit ​saying that people were still offered the pause discounts today.

You’ll be receiving the difference between what you paid and the new rate. There’s still an annual membership available at $130/yr.

Black Book is a pleasant surprise, I’ve been eyeing that