This one (was) a stadia exclusive iirc.

Yup, that’d be why I didn’t hear about it.

I think pretty much none of us did!

I hope Google gave them a big enough sack of money to compensate, but I can’t imagine they really did.

I was freaking out that tomorrow might be the auto-bill date for the current bundle but January 31st is going to be, right, since it’s the last Tuesday? One week to go. I’m pausing this time.

I still haven’t decided. The only game I really want in this bundle is Olli Olli Rad edition, or whatever it’s called. But on the other hand, I’d rather have a game like that on console, not PC. So I’ll probably pause. It’s a pretty good price for Olli Olli rad edition alone though.

Yikes, I just went to activate November games and they are no longer available? I used to be able to go back six months. Now it looks like just two?

Good thing I was mostly up to date. Usually I’m hella lazy about these and have four or five months waiting…

Wait they don’t let you go back as far as you want to activate the games you already paid for?

Yeah, dunno why it would be that way for Anklebiter, but I can go back at least as far as July of 2020 and claim games.

“Keys and Entitlements” under your account tab will take you back to previous months you’re subbed for to make selections.

I get this for all the titles in February bundle. No longer available for purchase. 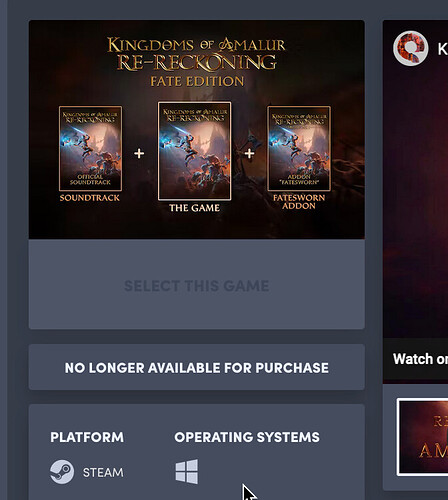 Same thing previously when I tried going back more than six months. This is an ancient legacy classic account or whatever that is. Wonder if that is related.

Neat, I never knew previous months could be purchased. In fact, I assumed they couldn’t, they were special bundles for that month only.

Maybe you didn’t get the bundle that month? For me it looks like I can still get everything.

Yeah, weird. Operator-ish error. Six month ended in October and auto-renew kicked off in December. No idea why it would skip November. I’ll ask them directly.

Now you’re making me paranoid. Gotta make sure I go back and redeem some stuff at least to give away.

BTW I just redeemed stuff from the September bundle. Mine is a month to month plan since 2017 if it makes a difference. Last two bundles I bought were September and December.

Speaking of December’s games, is First Class Trouble multiplayer only?

Games are being removed from the choice app thingy in two weeks.

Some of them are worth playing.

And once they’re gone for the App, you can’t play them anymore, apparently these games stop working when they leave the app.

Games are being removed from the choice app thingy in two weeks.

Boo… Maybe they said this was going to happen, but I wasn’t expecting games to leave the Humble app service.

What’s this app y’all are talking about?

There’s no way my redeemed Steam copy of a game is going away, right?

Or are you talking about the famous “Vault”?*

And once they’re gone for the App, you can’t play them anymore, apparently these games stop working when they leave the app.

It’s like a small gamepass that goes together your bundle of owned games, in other words.

It is. Just a small bonus for staying subscribed to the bundle for that month so people have a reason to stick around even when not interested in any of the games. Same reason they give a discount on the store too.