I’m one and a half episodes in and although it has great production values, a fantastic premise, and decent/good casting, I’m not hooked and don’t feel like it’s going to improve, for me. I can’t really put my finger on what’s missing or wrong with it yet. Maybe it’s because none of the characters are particularly interesting, and the dialog is pretty dull. But I’ll probably stick it out.

One of my junior high classmates, with whom I have had no contact with in 50 years, other than Facebook, posted on Facebook that his son is on this show…

I’m enjoying that it’s a period piece set in 1977, the 1977 references are fun, even the bad ones like Son of Sam. Although, 1967 might’ve been a little more believable, less Nazi senior citizens then.

I did lose my suspension of disbelief a bit when there was a FBI agent from DC assigned to a Florida murder, while the body was still on the premises.

Although, with the 4th Reich thing I’m waiting for a Red Skull appearance.

Probably apropos to watch this since I finished The Man in the High Castle.

I can’t really put my finger on what’s missing or wrong with it yet.

I can. Tonally it’s all over the place. One scene that could have been lifted out of Schindler’s List is followed by campy ersatz Tarantino. Plus the gratuitous over-use of Yiddish. We get it. They’re Jews.

Still, it’s kind of fun as a guilty pleasure. Plus I can watch Carol Kane and Saul Rubinek all day long.

I think if you go into this recognizing that it’s a comic book adaptation of a comic book that doesn’t exist, it really works a whole lot better. Or at least has for me through 2 episodes.

it reminds me a bit of Boys From Brazil, tonally, campiness.

Bonus points for the gratuitous Firesign Theater reference in E2.

This is an interesting take:

I figured out in the first episode “Hey, this is not historical. OK.” Like that first scene was a big ol’ clue: the Carter administration did not have any fearsomely good Nazi assassins in it.

And so from that point, I started watching it as a sort of Alan Moore alternate world comic book show, sorta like you’d watch the Watchmen.

But if they were fearsomely good, you wouldn’t know they were there, would you?

But if they were fearsomely good, you wouldn’t know they were there, would you?

It depends on how fearsomely good I am.

I am fearsomely good in my own right.

Around the fourth episode it dawned on me that this was really a Superfriends-style comic-book origin story. I don’t know why it took me that long, given how hard they jam the Batman and Robin theme down our throats throughout, even having the kid working in a comic book store for extra obviousness.

But the tone is all over the place as others have noted. I didn’t hate it, but I also didn’t think it came together very well.

And though I didn’t see the big twist at the end coming (the Pacino one), it didn’t really shock me. 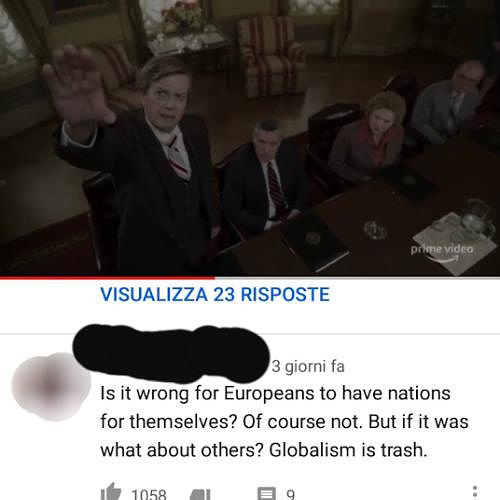 I doubt I’m the first one to notice how painfully obvious it is that the people behind this love them some Tarantino movies. Watched the first episode and all I could think was “man, this is like a Tarantino without any of the talent or mastery of tone”.

I’ll probably stick with it because, as it turns out, even the second-rate Tarantino-isms on display somehow managed to entertain me, even with all of it’s issues. If they get control of their instrument, it could turn out to be pretty good.

Watched the first couple episodes, liking it well enough so far. The discussion above about thinking of it as a comic book-style show certainly helped. If I’d taken the “based on real events” line in the description more seriously, I’d have been pretty confused and/or disappointed. But as it is, I’m happy enough to keep watching.

I’ve finished off the season, and I’m glad I stuck with it. “Uneven” is a good description, but overall I like what they did on both the personal story and big-picture conspiracy fronts. And all the 70s period references are fun. They did beat around the bush quite a bit, but that’s par for the course in damn near any streaming series these days. If there’s a season 2, I’ll watch it.

Just watched the first episode and I am so angry, I hope every one of those Nazi bastards get hunted. Uneven is sure the word though. I did NOT get a Tarantino feel at all… you guys do realize he’s had tons of movies over the years? This feels revenge-epic a bit and … wait --that is tarantino……

Grrr… I will continue to watch just to see secret Nazi 1970s’ get killed! BTW you think Al has a pillow in his belt or did he really get that fat?

For the record, I now recall one scene (BBQ) that had a Tarantino vibe. Looking forward to the rest of the season!