My wife volunteers at a cat shelter. One night, she went down there to drop of some paperwork and I got concerned when she was gone longer than normal. She gets out of the car holding a cat carrier that wasn’t ours. I ask, “Is that cat carrier empty?” She replies, “we need to talk…”

It turns out someone had dropped off a sick kitten who needed more attention than the shelter could provide, so she ended up “just taking it home until he got better…” He’s been here for 3 years. Cute little bastard.

Our stray. She went from being 25% hairless and sickly, to comfy and even got her own seat on the plane ride to seattle.

Making it hard to pack. 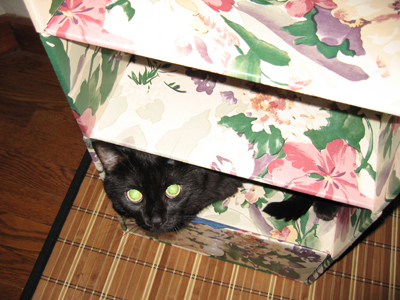 Resting after play on carpet (her new love after living in a house with all hardwood floors). 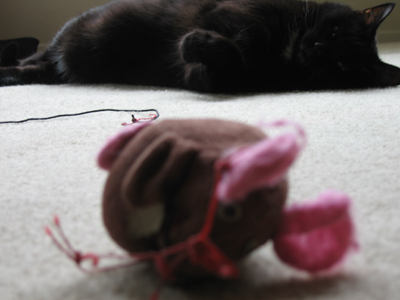 Although I doubt Matthew’s picture, I love it.

My cat Book was a stray. Walked up to my future girlfriend and mewled while she fumbled for her keys late one night.

I took Book in (who at the time loved to run at breakneck speeds into walls, headfirst) and a few months later, moved in with Susie. I’m still not entirely sure that our whole relationship isn’t a cover so that she can support more animals.

How do you post in-line images? Is it as simple as hitting the IMG button?

My cat Book was a stray.

You better treat Book right, because he’s actually the reincarnation of Lando Calrissian.

I didn’t have a camera on hand, my special lady had it to take pictures of the dogs she works with. It was chocolate colored and thin, not Kate Moss thin though, so don’t worry. I don’t know if it was a boy or a girl, so it was sort of the Ziggy Stardust of cats.
Thorry Guyth!

I’m a notorious softy for cats. Once I spent two hours laying under some douchebags camaro in my old apartments parking lot trying to get a kitten out of the guys engine. I left a note for them to come over to my house before they leave and I’d get the kitten out and take care of it. Naturally I found the note crumpled up on the ground and his car was gone. Hope it got out of the engine.

We have 4 cats, and we’re renting out the third floor of our house to a friend who has 2 kittens so our house total is up to 6. Let me see what pictures I have of my cats.

Murray pretending to be a rug. He’s a bobtail and is a constant source of amusement since his back legs are longer than normal and he runs like a little rabbit.

Sally is my oldest and most spoiled cat. You can’t tell in the pictures but she has blue eyes.

Sophia as a kitten.

Sophia a few weeks ago. She’s a very sweet kitten. Purrs more than any kitten I’ve ever seen.

Then there’s Gus. He likes to seperate his Starburst by color. Gus is the cat that my wife picked out because at the pound, he crawled up her body, say on her shoulder and raspily meowed into her ear. He was a very raspy kitten, now he has a melodic princess meow. He’s definitely one of the more unique cats I’ve ever had. One night at our old place, he climbed up to the very top of our dresser mirror (about 7 to 8 feet tall) and was donking around. My wife always falls asleep immediately, but I have a sleep disorder and it takes me a long time if at all. So I’m laying there watching him and wondering how he’s going to get down. Well, he gets over to the edge and faces our bed. He then puts all four paws on the edge of the mirror and launches himself straight down at our bed. In mi-flight he spread his front and back legs completely. For a split second he resembled a flying squirrel. Then he hit. It shook the bed so violently that it woke my wife.

He’s also been known to jump down our laundry chute at the new house.

This next picture amuses me the most because after I took it, my wife and I were looking at them and it struck me. In this picture, Gus looks like Salvado Dali. I’ve included a reference shot.

Sorry for all the pictures and stuff, I always get carried away.

second chet on the dander issue.
and keep the litter box scooped.

and yes, they rule I’m very impressed with McMaster’s ability to snap shots of his cats in candid poses. All the cats I’ve ever had seem to know when the camera’s pointed at them and instantly leave or stop doing what I wanted a picture of.

Anybody know how to get DietCoke out of a keyboard?

What th-? One-strike bans, rampant anti-chauvanism and now, this? WHO ARE YOU AND WHAT HAVE YOU DONE WITH TOM CHICK?

What th-? One-strike bans, rampant anti-chauvanism and now, this? WHO ARE YOU AND WHAT HAVE YOU DONE WITH TOM CHICK?[/quote]

There is an established precedent for Tom’s weakness for cute and furry animals.

I’m a sucker for these threads.

Not familiar with Fileshack hosting but I gotta say that’s one silly kitty you got there!

I recently signed up to volunteer with my local SPCA and it’s been about a month now and I love it. Kinda sad tho’ because they get a lot of black labs who are hard to adopt because they’re so common. They’ve got one guy in there named Brutus who’s about 10 years old and he’s been in the shelter for about a year now :{