I have a kenmore fridge which is about 10 years old. About 2 years ago the ice maker died and I had sears fix it. They would only do it If I bought a maintenance contract. For like #350 bucks.

Today, it died again and I decided to replace it myself. However, I am not sure i can find a replacement. I looked up the serial number and found ice makers that matched, but the pictures looked quite different than the one I have.

Here is my ice maker:
https://drive.google.com/open?id=0BwRETigB93_pWlBtRVZkZnZSOHc

Here is the side with the serial number:
https://drive.google.com/open?id=0BwRETigB93_pTFdUQUx6OHlZUGs

And here is one I found on amazon with the same serial number that looks quite different: 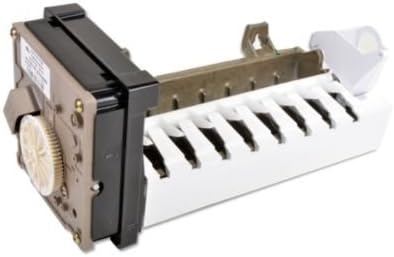 w10190965 OEM FACTORY ORIGINAL WHIRLPOOL KENMORE MAYTAG ICEMAKER (Icemaker only. It is recommended that you use parts off the old icemaker.

Note: That Kenmore is just a Sears brand name and whirlpool makes fridges for the Kenmore brand.

So, despite the size difference, if the model numbers match, does anyone think It would work in my fridge?

On the other hand my fridge is 10 years old. Assuming I can’t find a cheap replacement, I am not sure I want to fork out another $350 for an ice maker from Sears.

How long do fridges typically last or what is a typical life span to replace them at?

As a miserly bastard myself, consider how important it really is to have the ice maker. A new fridge just because the ice maker went kaput seems extreme, unless you were really looking to replace it anyway. The little plastic ice trays work just fine!

There are things I do not like about the fridge, minor annoyances. However, the though is more like, I just replaced the ice maker for $350 2 years ago. Do I want to spend another $350 to do the same? What if it also fails in a few years, am I throwing good money after bad? Id prefer to NOT buy a new fridge, however, those trays take hours to turn to ice (its been 4 hours now and they are still not frozen solid). I do go through a fair amount of ice too.

Also googling refrigerator life times, they are about 13 years long. So then there is the possibility of something else going wrong as well. Now if I could replace the ice maker cheaply, Id do that. I am guessing, however, that my model is so old, that its not available anymore.

As a miserly bastard myself, consider how important it really is to have the ice maker.

I’m miserly as well. My fridge was 30 years old when I finally replaced it.

And do you know what was the thing that caused me to replace it? The interior light quit working. A contact point for where the bulb screws into had rusted and fallen out completely. For a year, I got along without that light, but it finally got to me, and I caved.

@DeepT I guess it would depend on how much you use the ice maker. I don’t have one. I never have had one, so I don’t miss it. But I’d like to have one. And in fact, I would have bought my new fridge with one, except that I didn’t want to have to run a water line. But for refrigerators, 10 years is not very old. I have relatives who are still using models much older than the 30 year old one I just got rid of. With no freon leaks, they can go a remarkably long time. That said, when I own stuff, I like it when everything works, and 350 is a lot, so I guess I’d probably just apply that to a new model myself.

I just ran down to one of our local appliance dealers and bought one there without doing any research, because I’d had very good luck with them before, they’re nice guys, they have free delivery, set-up, and removal, and their installers are first-rate. Sure, I could probably have saved by shopping around or buying from a national chain, but that takes a lot of time and effort, and I trust these guys, and I’m happy with what I got.

How much energy savings for a new fridge compared to a ten year old one may be worth researching depending on electric costs. If you have a lot of people in the family opening it all day long might be worth it. Or just buy bags of ice depending on how much you go through and how much freezer space you have if you just want to get by a little longer until you buy a new one.

My wife generally tells me when it is time for a new one and I never argue about the fridge or washing machine/dryer.

Check with your electric company to see if they have an upgrade/recycling program. Mine (AEP) will haul an old refrigerator away and pay a rebate for getting an energy efficient replacement.

We have never had an ice maker and after what happened to our neighbor, I’d never want one. They went on vacation and returned to find their house full of mold. The ice maker had failed. An insurance agent told us that it was the main cause for insurance claims.

IANAIG (I’m Not An Insurance Guy) but I’ve never heard of icemakers failing and causing mold while someone’s on vacation, so I don’t doubt your story but it seems strange to me. This advice won’t help your neighbor but if that’s a concern for people they can always cut the icemaker off when they go on vacation.

@DeepT Maybe you should ask that vendor for some dimensions and/or pics of the different ends of the icemaker, if you haven’t been convinced to get a new fridge! The fact that the ice pattern is different would make me a little leery about purchasing the replacement without being 99% sure it would work.

I am not sure what I am going to do yet. Maybe Ill stick with the ice trays for a while and see how it goes. Maybe Ill be fine with it, although now the ice is made from unfiltered water. The ideal time to buy one would be on a big holiday sale.
I also do not know anything about the advantages / disadvantages of the styles. Like side by side, vs french doors, etc…

Side by side advantages is that doors are more narrow so in some kitchens where it may be hard to open a wide door can make it easier. Freezer can be easier to access as compared to bending with a bottom freezer. Ice unit will leave more space for actual food versus top freezer in most cases.

Disadvantage is that refrigerator is more narrow so some big dish items can be hard to fit. I am sure there are others.

I don’t know anyone who has a side by side refrigerator and likes it. Just FYI. French doors with freezer on bottom is really where it’s at.

Hey you know me! The last two houses we purchased have both had side-by-side refrigerators and I like them just fine. The thought of having to reach down to the floor to open up the freezer compartment seems strange to me.

The house we purchased last also had a refrigerator with a top freezer compartment in the basement as the secondary fridge.

I don’t know anyone who has a side by side refrigerator and likes it.

My wife hates the side by side mainly for lack of refrigerator space. We have a full freezer in our garage (since the side by side freezer space was not enough with 4 kids and she likes to purchase meat on sale).

She only accepted the side by side because it came with the house and we had other things to purchase that were more important at the time.

Fair, fair, gentlemen. I don’t know any wives who like it though, lol. Most guys I know don’t care as long as they can shove food in their mouths. I know a particular kind of guy though (uber nerd programmer who’s not into cooking), which is not always representative. :)

The freezer drawer was definitely a WTF on refrigerators before I got one. But since I have one now I prefer it. It’s nice to not have to bend over to get to the bottom of the fridge. It’s also more energy efficient. I’m not digging through the freezer that much, but I would imagine you’d have to use it for the majority of things you eat before it would make more sense for it to be on top again.

Side by sides have not enough fridge room, in my experiences with them. The main problem ends up being width. You’re not shoving tonight’s pizza box in there for storage. But also side by sides typically have more freezer space since they’re roughly a 60/40 ratio, compared to a more typical 70/30 with older top freezer models and bottom freezer models. That also means they have less fridge space, but you can sometimes make up for that by just buying a bigger one. If your fridge and freezer are usually half full (hi there empty nesters/DINKs/single people), then it’s probably great because you can have fridge and freezer access at stand up height.

You do have to be careful with french door refrigerators to buy one that’s big enough and has enough wire drawers in the freezer compartment. I’ve seen some models that have an absolutely insufficient amount of usable freezer space. Pay attention to cu. ft. and have an idea of what a top freezer model has to make sure you’re at or close to parity and you’ll do fine. If you want to go cheap, don’t get a french door, get a top freezer or side by side.

I would never spend $350 for an icemaker. Especially after you already did that. 2x $350 = $700 and you’re well on your way to a new fridge. Are you short on freezer space because the icemaker takes up a lot of room? If so, maybe think about a small freezer instead. It is much less likely to break and will more than make up the difference. Just make sure if you get a freezer you get a chest freezer not a vertical one. They are way, WAY more efficient and have much less frost buildup, and less freezer burn than vertical freezers. We put one in my wife’s tiny office and it’s been awesome.

Mind you, it’s a really shitty and quite small fridge, but that’s the breaks when you’re renting and stuff breaks. . .

Yeah, for that kind of money you could just buy this: 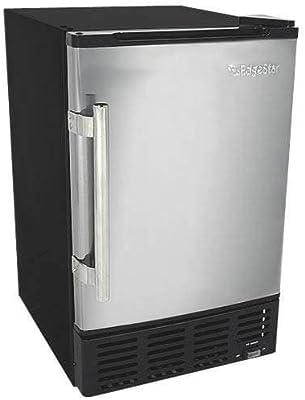 The Edgestar IB120SS offers a refrigerated storage bin ensuring that the ice produced will last longer and enabling the unit to operate without the need of a permanent drain line. Standing at 25 inche ...

But seriously, when you have the money, getting appliances you love instead of appliances you can “stand” is a great investment in peace of mind. But I’m sort of addicted to consumerism I think. :/

LOL we redesigned our kitchen about 3 years ago, and I talked my wife into this:

and you know what? A few months later she just out of the blue one day said “That was the smartest thing you ever talked me into buying.”

I rest my case.