PC is an excuse, and it’s also widely used by the right against the poor.

Meet the honor brigade, an organized campaign to silence debate on Islam

Whats not mentioned, is that the honor brigades very public face is Max Blumenthal, whose spent all day railing against Ayaan Hirsi Ali. He has a career out of attacking people for being “colonial apologists”, “islamophobes” and more.

Ayaan Hirsi Ali is not the only former Muslim who has faced issues from this front, as demonstrated by the cancellation of a speech by Maryam Namazie.

PC is an excuse, and it’s also widely used by the right against the poor.

Widely used by the right is topical.

The polar opposites of identity politics rowed over Clarkson, Cohen is astute in spotting that. The right has one million signatures. and tanks. 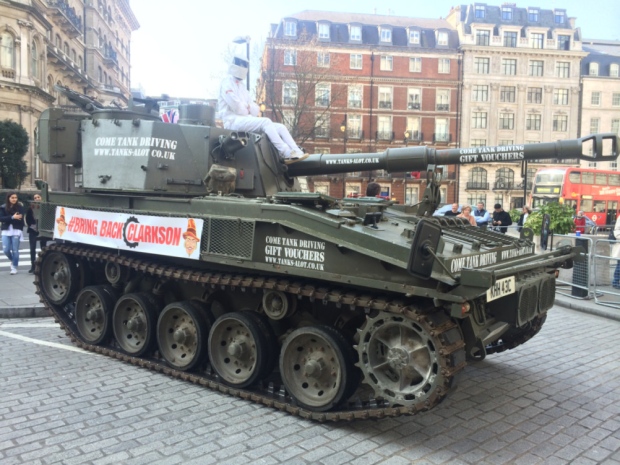 …He didn’t resign for misogyny. He was fired for violence in the workplace.

That’s all that was considered. There could have been other things considered, yes, but they were actually not.

(The spectator are a bunch of censorious cantankerous right wingers, but I’ll give them they don’t pretend. The comments section where loads of people go to bat for Clarkson shows what sort of problem the right has these days of course.

Of course, check out the Clarkson thread.

The 1m signatures and tank were about right wing identity politics, not punching people in the mouth. Guido doesnt care about Top Gear he just wanted to troll years of anti-Clarkson articles from the Guardianistas.

I remind the gallery that Stains (Guido) lives in Ireland, not the UK.

So… This is a Brit politics thread?

Political Scientists like to use ten words when two would do. With this I think you can simply reduce it culture. Here we have groups trying to impose their mores on others, using whatever means they have at their disposal.

And yet a large section of the British right are whining the fuck about it. This country is starting to seriously piss me the fuck off.

IL - Politics is not culture.

I’d argue a good bit of the Republican party these days is a heaping helping of white Protestant identity politics.

Political Scientists like to use ten words when two would do.

Indeed. If “Identity Politics” is about control, then it’s no different than every other brand of politics. The whole point of politics is to impose your will on everyone else, whether that means cutting CO2 emissions or cutting taxes on the wealthy.

And news flash: political activists have never been very interested in listening to the opinion of their opponents, and they have always distrusted individuals who shared an agenda with their opponents.

But traditionally, it’s been “from here, I want to do x”.

When you move into identity politics, you’re refusing to admit you’re here at all, things are suddenly skewed massively the other way and it all needs “correcting”. Even when the evidence is staring you in the face otherwise. See: the Tea Party on the economy (when the UK’s woes shows what happens if you’d have followed their policy), the ACA, AGCC, etc.

The petition started before the facts were known. It died a death once the BBC investigation showed the evidence, however its roots lie in the offence taken by certain communities who hate Clarkson due to his perceived lack of political correctness, hence dozens and dozens of articles in the Guardian accusing Clarkson of being a racist and misogynist in recent times. The petitions from this side pre-date him punching Oisin too.

So… This is a Brit politics thread?

I deliberately left the pop culture flame bait out, but why would NY Mag and Americans attacking Chait for daring to oppose political correctness whilst being a white cisgender hetronormative male be a British thing?

The flame bait and twittterstorms relating to identity politics I mentioned include critiques of games by some feminist schools of thought that are adherents of identity politics, the batgirl cover, Lionheads celebration of nationalcleavageday, Lena Dunham writing about Jewish boyfriends. The most common form is outrage over perceived offenses taken, or most commonly taking offence on behalf of someone else.

“Not even Jewish & number nine made me want to riot,” tweeted another,

Also, from the Clarkson thread, which ended up talking about why Chris Rock doesnt play universities any more.

why would NY Mag and Americans attacking Chait for daring to oppose political correctness whilst being a white cisgender hetronormative male be a British thing?

The observer writer lambasts a Telegraph writer for writing the following:

The focus hasn’t been on what he allegedly [sic] did with his fists in that hotel, but on what he does with his brain and his mouth the rest of the time: agitate the PC; annoy the eco-friendly; spout values that we — as in that infinitesimally small number of people who work in politics and the media — consider to be toxic and wicked.

Clarkson punched an employee. Internal disciplinary procedure (and police involvement if desired by victim) and whatever punishment that procedure requires. Instead it has been field day for the worst of the Guardianista dragging up every single incident they can about Clarkson and dressing it up in the worst possible light.

The firing was due to Clarkson’s punch.

The media schadenfreude was due to his dickishness. You expected sympathy? See also: arrest of Justin Bieber.

The firing was due to Clarkson’s punch.

The media schadenfreude was due to his dickishness. You expected sympathy? See also: arrest of Justin Bieber.

Media schadenfreude? I suggest you don’t know what that word means, as the Guardian-vein media have always had the exact same rhetoric and message about Clarkson. There was no post punch schadenfreude. Nothing changed except that they had more reasons to scream invective into the night, and that the world very visibly cared less.

Indeed, if anything, the schadenfreude is reserved for those who view leftist media with scorn. The Clarkson affair has shown just how little people care about them, their views, or their opinion.

I agree with you minus the hyperventilation. And I’m amused that of all the dicks in the world who find their comeuppance, this guy is the one that all of you want to make a martyr.