I'm the prettiest! You're all ugly! I'm the best!

So I was reading National Geographic just now when I stumbled on this awesome article (found the good one with pictures!: http://ngm.nationalgeographic.com/2008/09/wrestlers/guillermoprieto-text/1)

And since I accidentally posted this, pictures inbound as I find them: 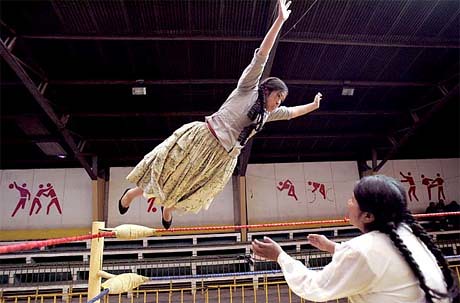 Another article in Spanish (?) with lots more pictures that really capture the spirit. here

Basically, it’s a bunch of crazy Bolivian women dressed up in traditional clothes beating the ever loving crap out of one another, and anyone else that happens to be close to the ring. Think WWE on crack!

If there’s one thing South America has going for it, it’s the culture.

Geez, they set each other on fire even?

Geez, they set each other on fire even?

I know! It’s so awesome. According to the National Geographic article, the luchadores swear that none of the injuries or fire is staged, although they do have an act like the WWE (apparently WWF is sooo 90s). One day, when I have two quatloos to rub together, I’m gonna go down there and watch for days on end.

The NYTimes has some reporter who’s been stranded in Bolivia for who knows how long and keeps filing hilarious articles about its wacky goings on.