Incremental Epic Hero 2 (and occasionally some other incremental games)

I think when I did it it was days (maybe 48 hours? I can’t be asked to wait longer for anything - incrementals have taught me to just reset and restart instead of sticking around), but you only need T2 rebirths to get your skill proficiency up. I also throw most of my guild points into it (7 on this run.) The other trick is to keep running the potions - the elixir of understanding and cool head ointments give some nice boosts. If I had to guess, I would had about 10 points in the T2 skills before I tried for class mastery 3.

Skill cost reduction is to more quickly max out all your skills so you can T2 rebirth and buy more XP boosts (also, get the T1 resource boosters, etc.).

I keep forgetting this and need to remember. I occasionally get confused about why it seems like a t2 rebirth would yield so points but then it’s always because it’s right on the heels of a t2 or t3 and this is why.

Anyway, I have the Research building researches at 10/14/14 or so (and rank 2/level 20 for the building). I think I may just go ahead and push them all to 20 before spending the rest of this WA working on choice town researches. That’s all there is left for me to do, I think.

Ha, got a proper fuck you of a free chest today. 1 portal orb and 50 epic coins.

I haven’t seen any. Next run I’ll just be leaning on longswords again, for the warrior bonuses.

Looking and thinking about the stats, I feel like I’m a little ways off from the % stuff really making a dent. And I’m not clear on the relationship of some of the derived stats to their derivatives. E.g.:

I found an attack adder level 9. I put it on one of my longswords, it gives +113 or something. That seems like it will be very good at the start of a run, even though I don’t know how attack turns into damage for a given skill, and I don’t know if it’s better than +10% physical damage. Fortunately I don’t have to choose; I’ve unlocked enchants on longswords and have 4 magic ones so I have four longswords that each have 2 slots. I’m prepping to move some proper enchants to them. But I only have the one phys damage. So +flat attack it will be, most likely. I do have a few %attack boosts (attack multiplier is the buff I think). But those seem like they will not be as useful to start a run. 3% of 3500 is +105. But as I will have a much lower attack at the start of the run, those seem like they’ll help snowball but need to be complimented with flat bonuses. And I don’t have the scrolls to move everything I want to move anyway.

And as for Attack Proportion, they seem nice (% of hero level as attack boost) but they’re even more useless at the very start. So I may slot one or two of those but I’m not as focused on that.

Flat hp seem like a good choice too. the guide on the wiki says to take regualr Tower Shields for defense because they have physical damage absorption and help for early dungeon pushing, so I do that. I have 4 enchanted phys damage bracelets (two common, two of the uncommon) and I will slot some of the +hp buffs over there I think.

I purchased the pause from the coin shop. I am going to note all my stats at the very start (with gear included) so I can start trying to math this out in the future. But I don’t know when the next WA is coming. Maybe in the next week, maybe after.

Flat hp seem like a good choice too. the guide on the wiki says to take regualr Tower Shields for defense because they have physical damage absorption and help for early dungeon pushing, so I do that.

Yeah, I saw that but I already unlocked that before WA. I think next WA I’m going to focus on lower tier equipment to avoid the tenacity penalty early on, but I will probably try to take some high level equipment too as I lost most of that last time because of my mastery fuck-up and now I find I’m kind of struggling to regain it, so I’m stuck with low/mid tier equipment even as I’m trying to push for high RB2/RB3. Apart from my warrior my heroes can’t complete half the dungeons I’ve unlocked.

Edit: That advice is found here, in case anyone hasn’t seen it.

I think it’s absolutely the right call early on. I have four Bat Swords, which are a much superior to regular weapons and I actually got their their mastery unlocked so they live with me forever until I do a thief tier 3 rebirth and lose it. Which is why I am waiting until after next WA (and hopefully hitting 5 milestones to unlock “keep unique or whatever eq”).

Speaking to @espressojim 's point and yours as well, these are inarguably superior to long swords.

But they’re rare eq and harder to level. They’re almost double the base item level (so the higher tenacity penalty). And I don’t have enough to equip them on passive characters to stack + skill level on the main character.

But I would love to get to a point where I can at least run them on the active character while everyone else uses longswords, even at the start of the run. But I don’t know if or when that is coming. And probably longer term the active character will be archer or even the beast tamer (there are unique weapons for all classes).

Slime masks are a unique eq that give bonus % xp gain. I may try working them in after next WA. But they’re jewelry and they’re not helpful if I can’t kill quickly enough without other accessory boosts. But I want to experiment with that at some point, 100%.

I’ve only found one bat sword so far but my warrior has been wearing it ever since, it’s great. Bat shit is good for high XP dungeons I’m finding.

Area prestiege resets on WA. But it’s very useful. Swarms on harder difficulties are more lucrative, e.g. I just starting messing with it in WA1, later in the run. 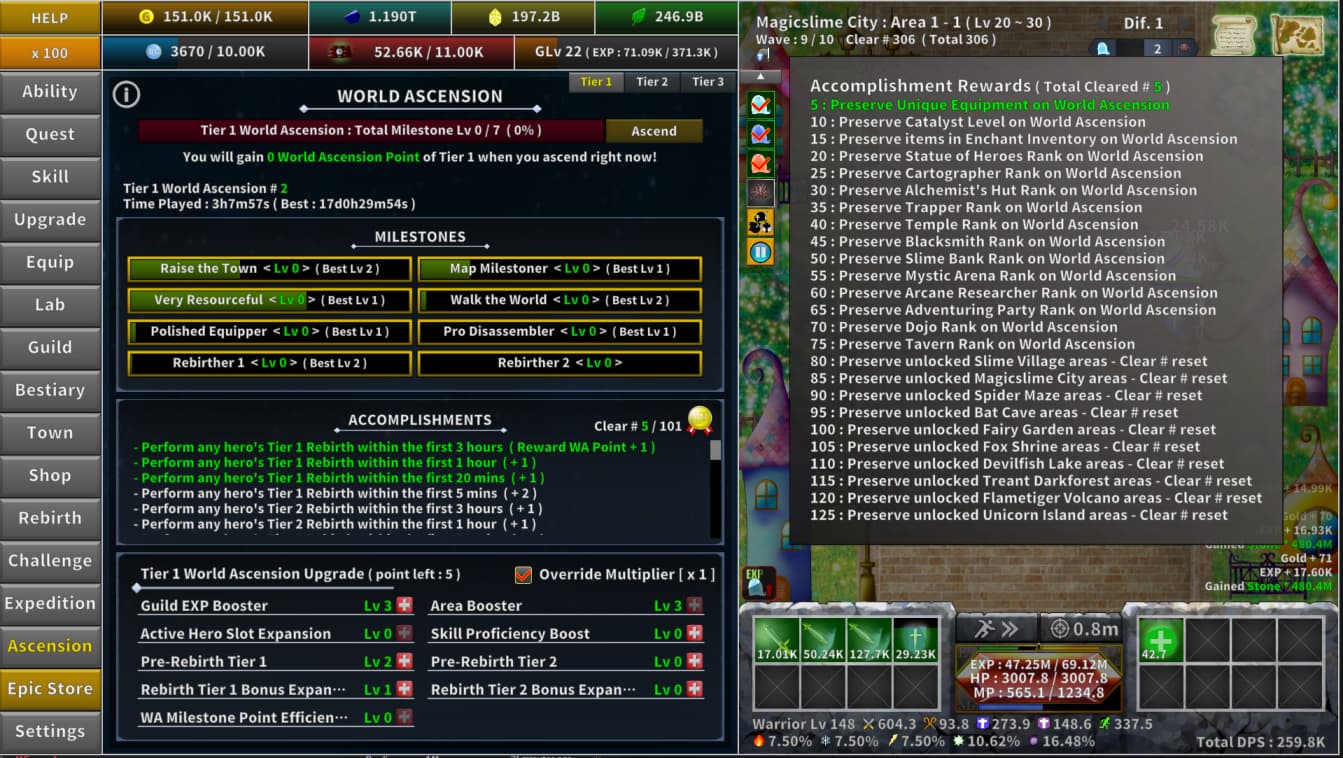 This includes Guild level 15 in twenty min and Kill Flozborp in eight hours. Feels good man. It was 19m44s on guild level 15, cutting it a bit close O_O. As always be careful with nitro usage.

3h7m for the first raidboss. I think I could maybe do #2 but I need to tweak my strategy. Angel is lagging at the start of the process and I need to figure out how to fix it. Or swap to probably archer. Also, I managed to screw some stuff up at the start. I forgot to hit the upgrade tab up until maybe twenty real life minutes in. You can queue up upgrades peacedog, just remember and do that dummy. I also I ranked up statue of heroes but forgot to start leveling it, but that was probably 3-4m (IRL) of run time without the bonus, so it wasn’t too bad. Still that was probably 50-70% xp gain missing for a bit there.

I had a 1 hour xp buff I carried over to start the run. It was certainly helpful. I have the convene button unlocked so I was moving the passive characters to wherever I needed clear count (they don’t get full credit - the passive gain penalty I assume - for clears but everything helps) until I hit level 71 and could do the first rebirth (15m40s).

I forgot to make potions again.

For fuck’s sake. Desperately trying to get RB2 on my Archer (probably pushed a little early), and finally got to the point where I can theoretically do Bat dungeon one, which would push me over the top in a couple clears. And of course in four runs it’s thrown three metal bats at me. Whereas my warrior, which has the title quest for metal bats, has seen one in dozens of runs.

And Guild level 30 in 6h55m makes 6 milestones, which is all I will get in WA1. till, that’s a nice gain, including unique weapons persevering. As an added bonus in the early portions I picked up two slime masks. So I’ll have to get the thief working on those soon. 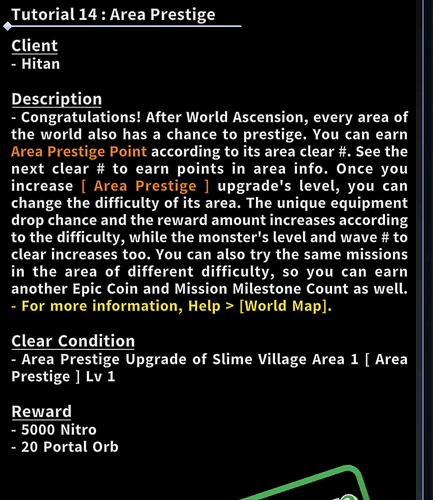 Ahhh, cool, thanks! I haven’t done my first WA yet, just got the Thief unlocked.

Freaking statue of heroes rank 4 needs 65 guild. Eeeep. Even though I hit level 49 in just over 24 hours, it feels forever away.