Incremental Epic Hero 2 (and occasionally some other incremental games)

I did it finally.

Nice! I’m struggling to beat it right now myself.

Nice! I’m struggling to beat it right now myself.

Well, take one piece of advice from someone who kept meaning to focus on potions and then forgetting: potions good.

TBH I’m not sure the regeneration poultice was all that helpful. This time, I killed the boss too quickly to even toggle nitro off. Where as previously they were grindy fights where I watched my health slowly dwindle (or somewhat rapidly dwindle with nitro on; but I had some fights that went 10ish seconds which obviously failing a dps check hard there).

I do think bat gear was crucial. I wasn’t using that much in my attempts late last week.

YMMV, but if you haven’t unlocked the 5 WA accomplisment award you might want to hold off on farming uniques. Or if you don’t mind refarming them, have at it (or farm them and let him master them and then wait a bit before doing a T3 rebirth on him).

If you haven’t gotten this far, eventually you unlock an expedition that rewards proficiency scrolls (instantly granting you some amount of “time” wearing an eq; currently I get 3.5h or so for each scroll at expedition level 7). That really helps speed up gear mastering.

On second thought, I am now considering grabbing a 4th active hero as my priority upgrade on WA. But no rush.

I picked up the fourth active hero on my 2nd WA. Prioritised over the milestone bonus (which I didn’t have enough points for anyway), and also a third level of area booster which was probably a mistake. Managed to get 9 accomplishments on that one, which was less than I was hoping for, but not too bad I guess considering I didn’t really min-max the whole thing. I’m just not a fan of this design of packing so much long-term progress into a (relatively) short space of time with too much micro going on and a lack of clarity as to how to optimise it. It totally goes against the appeal of an idle game for me. Especially the way it incentivises save scumming, which I refuse to do in this game. I think I’m going to go into semi-passive mode on this game for a while (maybe after I unlock auto rebirth 2), at least until the new content gets added. 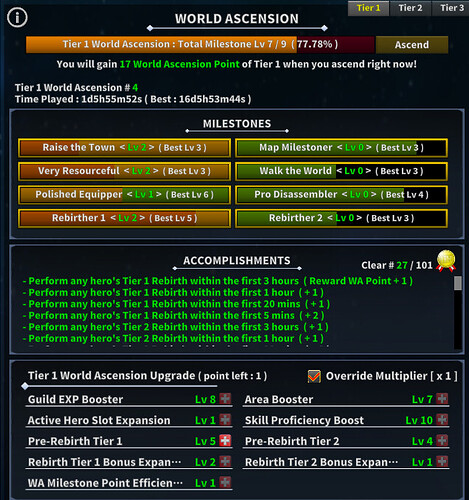 I went to bed last night and forgot to pause, or I’d have gotten another 4 points for guild 50 in 24h, but I missed it. On the other hand, no biggie - you can always get it next time, no need (at least for me) to be obsessive. The bounce back after WA is going very very quickly - I already have a few heroes on automated T2 rebirth, while I push one hero along to get a higher level T2 or T3 RB.

Unlocking foxes and fish open up some damn fine pets. You may get the purple ones soon, which are all so good!

That said, I feel like I’m getting close to the edge of content. There’s still the Treant area left to get to (maybe this WA?), but I’m running into not yet implemented stuff. Maybe at some point I’ll put this down for a bit.

Especially the way it incentivises save scumming, which I refuse to do in this game.

Save scumming? I mean, I know what it is, but I’m not sure why one would do it?

To redo the start of a WA in case you messed it up. Seems to be very common on the Discord.

That seems really over-obsessive to me. Like everything else, you’ll WA soon enough - if you miss a milestone, it doesn’t really matter the impact is pretty small. Maybe I’m just a filthy casual.

That said, buying the pause for the last WA made it much more pleasant. I was able to do a billion things in the first 60 seconds of the game (buy stats EXP gain to level > 1000, etc).

Yeah, but unless you’re doing a really quick WA, you’re talking about, say, a week, instead of 20 minutes to an hour.

Yeah, my attitude remains “I’ll get it next time”. And I do, so it’s not worth being frustrated over or trying to play perfectly.

That’s been my approach, but it makes me like the game less. It shouldn’t be a thing. I don’t think I’ve ever played an idle game with “runs” this long where so much progress is frontloaded into the start of the run. Especially not long runs that require active participation throughout. Normally the point of long runs is to leverage some compounding bonus.

Unlocking foxes and fish open up some damn fine pets. You may get the purple ones soon, which are all so good!

I am really excited to get purple pets. I looked at what a few did and yes please. Also, I believe tier 2 auto rebirth is purple?

4th hero should theoretically make getting some of those accomplishments easier. But yeah I suspect we’re going to wind up outpacing the content. Which isn’t a big deal, IMO. I have plenty to do in the mean time (I’m a little ways behind you). It’ll be 4th character and some pre-rebirth investment for me this time, for sure.

I’m also like you that I’m not too worried about screwing up post WA. I made a save last time, realized I probably could have done a little better but (1) got my main goal (unlocking 5 accomplishments) and (2) don’t mind putting it off until the next one.

That’s been my approach, but it makes me like the game less.

FWIW, time limits make me anxious in games and I don’t care for them. So you’re not alone there. I’m methodical and like to take things at my own pace, so being rushed is anti-fun for me. That’s a me “problem” and not a game problem, but just wanted to say that I’m not a fan of that particular mechanic either. :)

@espressojim did you do anything in particular to get someone to level 300 for the first time? I assume I’m going to have to figure out how to brute force this via dungeons. XP gain around level 279 for the warrior (with 60/100 xp tier 1 rebirth xp gain skill) is just crawling. I’m worried this is going to wind up costing 100 orbs though.

It’s usually easiest to save one of the title quests like Quester, Survival or even Proof of Rebirth 2, though you may not want to delay the bonus for that one. Also I don’t know if you have the Queen of the Fairies quest available but that’s a big chunk of XP.

As Ginger says, there’s usually some big title you can snag for the first time you’re hitting 300 to open up those quests. I saved cashing in those quests for pushes to 300. If you can, line up those quest returns with the XP bonus you get for taking out a swarm. Also when in doubt rebirth again - tier 2 exp boosts of your tier 1 exp boosts. I didn’t brute force with 100 orbs (I assume I’m doing it wrong if I need to use more than 5-10, and even then I feel like I’m “forcing” it.)

I’m not clear when QoF quest opens, but it’s one of the best quests for XP. That and “All things Yellow” are workhorses in pushing levels.

Should I WA the minute I have enough points for the first time? If not how do I assess when is good?

For me, I know I wanted at least another active (passive) hero, and that’s 10 points. And then I want to speed up things like Guild EXP. So for me right now I’m sitting on 12 points and haven’t pulled the trigger yet, but I might be doing it all wrong.

Should I WA the minute I have enough points for the first time? If not how do I assess when is good?

Well, you can’t go wrong either way, really. That said, it’s really a matter of what you desire in terms of upgrades. Area Booster gets expensive quickly (costing 2 per level; so two levels is six points), but is amazing. Guild XP is only 1 point per level cost wise but also very important. And then there’s just lots of other stuff you’ll want. After those two Pre-rebirth tier 1 is probably best. A couple of points there can help make the beginning quicker (and maybe help you reach some accomplishments).

I’m glad I went to I think it was 10-12 points but I can’t remember exactly. I grabbed Area Boost level 3 (6), Guild Xp 3 (3) and then I think two levels of pre rebirth tier 1. But I took my time in part because I didn’t get serious about getting milestones until like two weeks before the actual WA.

What did you grab for your first upgrades?